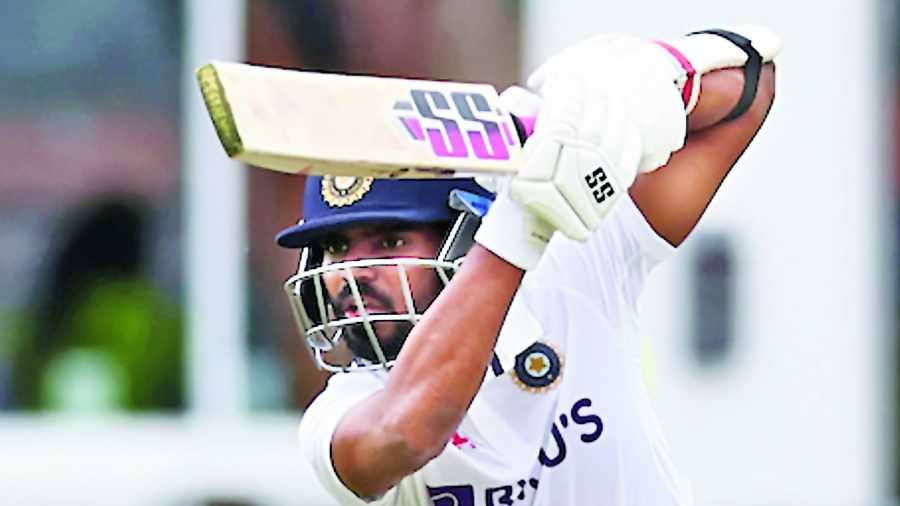 The Indian top order crumbled as most of the batters failed to build on their starts on the opening day of their warm-up match against Leicestershire at Grace Road in Leicester on Thursday.

This is the only practice match for the Indians ahead of their rescheduled Test match against England at Edgbaston from July 1.

Wicketkeeper-batter KS Bharat held the innings together showing good application and determination. When rain forced early stumps with another 26.4 overs remaining for the day, Bharat was batting on 70 as the Indians reached 246 for eight. Bharat hit eight boundaries and a six during his 158-minute vigil.

Rohit Sharma (25), Shubman Gill (21), Hanuma Vihari (3), Virat Kohli (33) and Shreyas Iyer (0) fell victim to injudicious shot selection on a cloudy day at Leicester. Twenty one-year-old pacer Roman Walker, who is yet to play a first-class match, returned the most successful with a five-wicket haul.

Gill was the first to depart with the team total on 35 and, 15 runs later, Rohit brought about his downfall with a miscued pull to a short delivery. The Team India captain hardly looked in control during his 64-minute stay at the wicket.

After India lost half of their side for 81, Kohli and Bharat tried to repair the damage with a cautious approach. None of the batsmen were willing to take a risk and concentrated on rotating the strike.

Kohli, who was shaping his innings well, fell leg before when he failed to connect a shot on the leg side. The Kohli-Bharat pair added 57 runs for the sixth wicket. The former captain didn’t seem too happy with the decision and spoke to the umpire before walking off.

Cheteshwar Pujara, Rishabh Pant, Jasprit Bumrah and Prasidh Krishna are representing Leicestershire in the warm-up match. They are led by opener Sam Evans. Leicestershire county, the BCCI and the ECB all agreed to allow the four players from the visiting camp to be part of the Running Foxes side in order to allow all members of the travelling party to participate in the fixture.

The match is being played with 13 players per side to provide flexibility and help manage bowling workloads.

Ravichandran Ashwin has joined the Test squad, having recovered from Covid-19. The off-spinner reached Leicester on Wednesday.

It was learnt that he joined his teammates at the ground in whites on Thursday morning, but did not feature on any of the team sheets, which were finalised on Wednesday.

Ashwin was part of the squad for the first four Tests of the series in England last year, but did not get to play as the Ravi Shastri-led team management preferred Ravindra Jadeja as the spin-bowling all-rounder.

However, Ashwin could still be in contention for Edgbaston given his vast experience of playing in English conditions and Jadeja’s indifferent form this season.