Kohli was supposed to be the big-match player and rule the playoffs. Instead one Rajat Patidar stepped into the shoes of his more accomplished teammates. 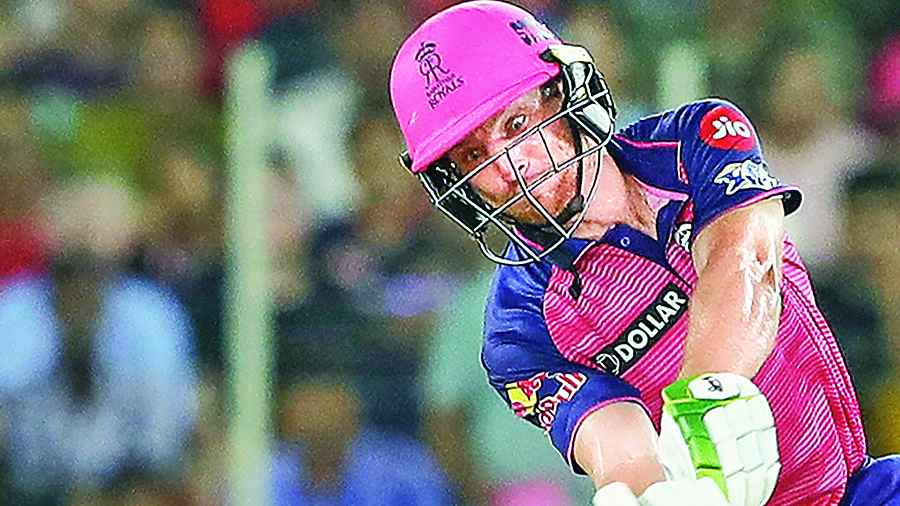 Jos Buttler during his unbeaten 106 off 60 balls against Royal Challengers Bangalore at the Motera stadium in Ahmedabad on Friday.
PTI
Indranil Majumdar   |   Published 28.05.22, 01:08 AM

Trust Jos Buttler to strike form when it mattered most. After a roaring start to IPL 2022, during which he hammered three centuries, the England opener went through a brief lull.

On Friday, in Qualifier 2 against Royal Challengers Bangalore, Buttler slaughtered their attack to bring up his fourth century this season as Rajasthan Royals galloped to a seven-wicket victory at the Motera stadium in Ahmedabad.

The Royals thus set up a clash with Gujarat Titans in Sunday’s final, their first entry into the title round since 2008 when they won the title in the inaugural year.

Yashasvi Jaiswal and Jos Buttler provided the Royals with a rocking start reaching 67 in the Powerplay overs.

Jaiswal started the carnage with two sixes and a boundary in the innings’ first over by Mohammed Siraj.

The left-handed batsman was finally dismissed in the sixth over for 21 by Josh Hazlewood but Buttler continued to torment the bowling.

There was no slogging or pre-meditated shots, but pure, classy stuff, relying mostly on skill and timing. It was a stunning innings as he completed his half-century off 23 balls and needed another 36 to reach his century.

None of the RCB bowlers made an impact. It was only later that Wanindu Hasaranga tried to put up a semblance of a fight but nothing mattered. Buttler was unconquerable as he whipped the RCB attack with disdain. Quite appropriately, he brought up the winning runs with a six off Harshal Patel after completing his century.

For RCB and Virat Kohli, a title remains elusive since 2008.

Kohli was supposed to be the big-match player and rule the playoffs. Instead one Rajat Patidar stepped into the shoes of his more accomplished teammates.

Patidar, from Indore, continued his fairy tale with another superb half-century on Friday. This followed his 112 not out against Lucknow Super Giants in the Eliminator at Eden Gardens.

It is mainly because of his innings that RCB managed to reach 157 for eight. On a wicket which offered pace and bounce, Patidar, 28, showed why his century could no longer be regarded as a fluke.

This was after RCB’s star opening pair of Kohli and Faf du Plessis failed to find the momentum.  Prasidh Krishna’s away swinging delivery reared up awkwardly outside his off stump and Kohli couldn’t keep his bat away from it.

Prasidh’s 19th over dashed RCB’s hopes of a tall score. After removing Dinesh Karthik, he flattened Wanindu Hasaranga’s stumps with a perfect yorker. Besides taking three wickets, Prasidh conceded only 22 off his 24 balls.