By varying his flight and mixing things up with wrong’uns, the chinaman did enough to create doubts in the minds of Mumbai Indians’ strong batting line-up 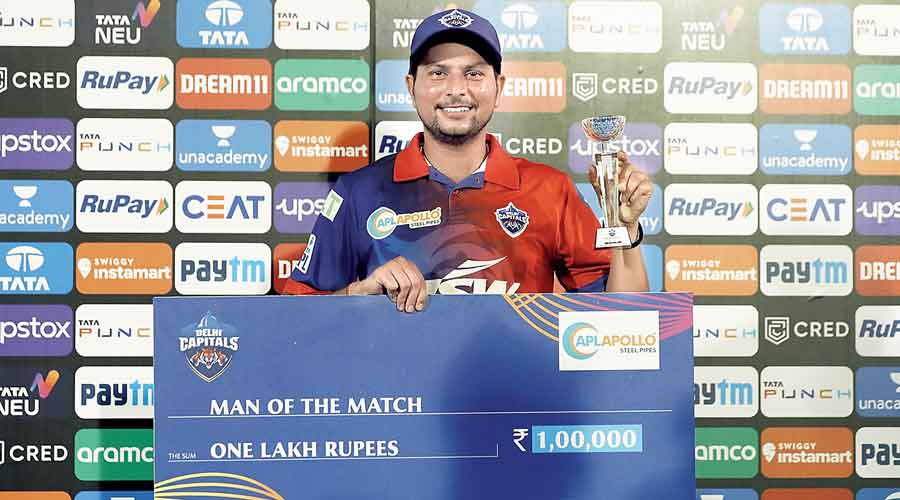 Just nine matches were all Kuldeep Yadav could play over the last 13 months before he took the field for Delhi Capitals in the IPL on Sunday. Off form, perceived “attitude” issues, the previous Indian team management’s alleged apathy towards him and a knee injury troubled Kuldeep for a major part of last season.

The chinaman bowler returned to the India fold in February following his recovery from the injury, featuring in an ODI versus the West Indies in Ahmedabad and a T20I against Sri Lanka in Dharamsala.

His performance in both those matches went largely unnoticed. But at the Brabourne Stadium in Mumbai on Sunday, Kuldeep’s bowling was quite reminiscent of the period when he made his international debut.

By varying his flight and mixing things up with wrong’uns, Kuldeep (3/18 off his four overs) did enough to create doubts in the minds of Mumbai Indians’ strong batting line-up and also picked up the prized scalp of their captain Rohit Sharma. The India skipper was looking dangerous before Kuldeep deceived him with flight and had him caught at the deep.

Ishan Kishan, who top-scored for Mumbai with an unbeaten 81, too didn’t find the going to be easy against Kuldeep even though he could take on Axar Patel, a Team India regular in the home Tests since his debut a year ago.

A few matches in Kanpur before joining the Capitals camp and frank discussions with his long-time coach Kapil Pandey have turned out to be beneficial for Kuldeep. “We talked about what appeared to be ailing him and we figured out that he needs to read the batsman’s mind, bowl full-length balls and cut out the short stuff,” Pandey told The Telegraph on Monday.

“Kuldeep had done that in two district tournament matches (in Kanpur) earlier this month, picking up five and three wickets respectively. He just stuck to that yesterday (Sunday).”

So will this IPL lead to a revival of the 27-year-old, who’s on the elite list of bowlers with two ODI hat-tricks? “The previous Indian team management included him in one or two games and then benched him for a longer streak. That’s the main reason why he struggled. Also, during his stint with Kolkata Knight Riders (in IPL 2020), he didn’t get enough chances and then missed the entire IPL last year.

“Now that he has finally regained some rhythm, I’ve told him that he needs to carry on doing just what he did in Sunday’s game and follow the basics. If he does that consistently, you can’t stop him.”

Importantly, the support and assurance Kuldeep has got from Capitals head coach Ricky Ponting and captain Rishabh Pant has given him a sense of security, which Axar had pointed out.