Abhishek Sharma delivered with a solid, compact 50-ball 75 that made the run chase easier for the Hyderabad team as it eventually strolled home with 14 balls remaining 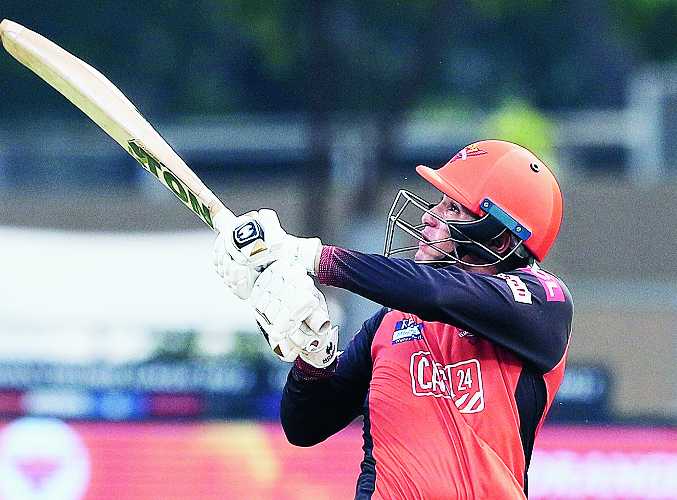 Abhishek Sharma of Sunrisers Hyderabad during his 50-ball 75 against Chennai Super Kings at the DY Patil Stadium on Saturday.
PTI
Sayak Banerjee   |   Published 10.04.22, 02:06 AM

The going just doesn’t seem to get any better for Chennai Super Kings as the defending champions crashed to their fourth straight defeat in this IPL on Saturday.

After losing to Kolkata Knight Riders, newcomers Lucknow Super Giants and Punjab Kings, Chennai were given a pasting by Sunrisers Hyderabad who thrashed them by eight wickets at the DY Patil Stadium in Navi Mumbai.

The Sunrisers too were yet to be off the mark going into this game. But since winning the toss and opting to bowl first, they got their execution right in most cases and restricted the Super Kings to a modest total of 154 for 7 first up. Thereafter, under-pressure opener Abhishek Sharma stood up and delivered with a solid, compact 50-ball 75 that made the run chase easier for the Sunrisers as they eventually strolled home with 14 balls remaining and opened their account.

Even former Knight Riders batsman Rahul Tripathi, who too had been struggling earlier in the tournament, regained some form, hammering his way to an unbeaten 39 off just 15 balls that also took further pressure off Abhishek, especially after captain Kane Williamson (32)’s dismissal against the run of play.

Five boundaries and three maximums adorned Abhishek’s knock, which came at the right time for his team as well as him. Not trying to be cheeky, the 21-year-old stuck to his game, giving the Sunrisers the thrust they needed in pursuit of 155, which could well have become trickier had they lost early wickets.

Some credit should also go to skipper Williamson, who looked quite happy to play second fiddle and held one end up, enabling Abhishek to concentrate on his own game and grow in confidence.

Williamson’s departure too hardly had any effect on the youngster as he remained composed right through. What also stood out in his knock was his keenness on taking the ones and twos instead of relying primarily on the big, glory shots. Out of Abhishek’s 75 runs, only 38 of them came through boundaries and sixes.

TN duo’s strikesOff-spinner all-rounder Washington Sundar (2/21) and T. Natarajan (2/30) were crucial to the Sunrisers limiting the Super Kings to a modest total.

Washington removed opener Robin Uthappa and Ambati Rayudu, who were both off to steady starts, while Natarajan bowled a wonderful yorker-length inswinger to clean up Ruturaj Gaikwad, extending the batsman’s lean patch.

Later in the slog overs, the left-arm quick returned to account for Shivam Dube for his second wicket.

Clash to prove a point or two