‘When I was picked, Rahulbhai asked me to control what is in my hands’ 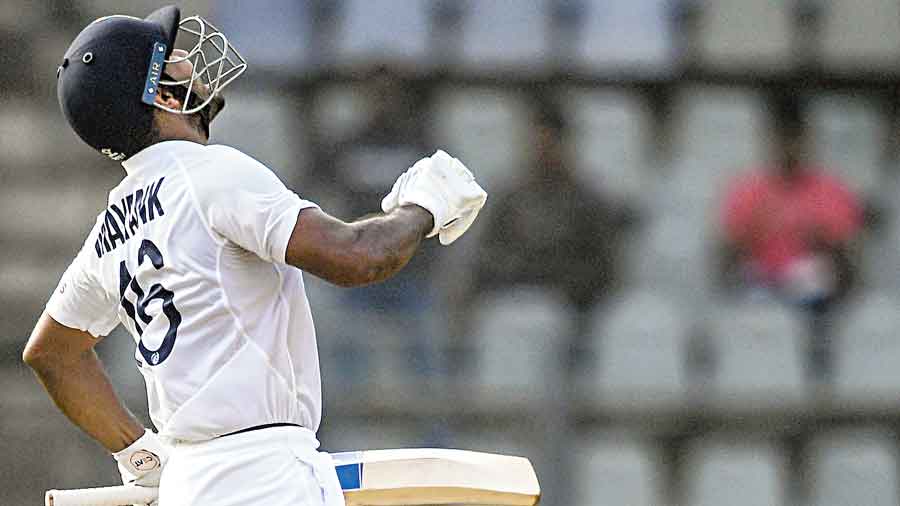 Focus on controlling the controllable, as per head coach Rahul Dravid’s advice, was Mayank Agarwal’s mantra when he stepped out to bat on Day I of the second Test versus New Zealand in Mumbai.

The runs (120 batting) he has got so far should send a message across to India’s first-choice openers Rohit Sharma and KL Rahul that they shouldn’t take things for granted once they return to Test cricket.

“When I was picked, Rahulbhai asked me to control what is in my hands, saying, ‘Go out there and give it your best’,” Mayank said later. “He had told me, ‘When you get set, make it big’. I’m very happy to have capitalised on the start that I had.

“But that message was very clear from Rahulbhai, that I should make it count.”

“Sunny Sir told me that I should consider keeping the bat a bit low initially. I have this tendency to hold it high and I couldn’t make that adjustment... As he was saying, I noticed his shoulder position and realised that I needed to be more side-on,” he explained.

Although he took a bit of pounding against centurion Mayank, it was a special occasion for Ajaz Patel, who had an overall successful day in his first-ever Test appearance in the city of his birth.

“This is what dreams are made of. To be out here and take four wickets on the first day is special,” Ajaz said. “I’m pretty happy to be back in my hometown. At the Wankhede, it’s really special for me.”

It’s important for the Tom Latham-led Black Caps to restrict India to below 350 as without regular skipper Kane Williamson, who’s out with a flared-up injury in his left elbow, they need to bat out of their skins. “Kane will likely require a sustained period of rest,” head coach Gary Stead said about Williamson.

India spinners Ravichandran Ashwin and Axar Patel, together with Jayant Yadav, who’s returning to the team after over four years, are more than capable of making better use of the Wankhede surface than the New Zealanders.