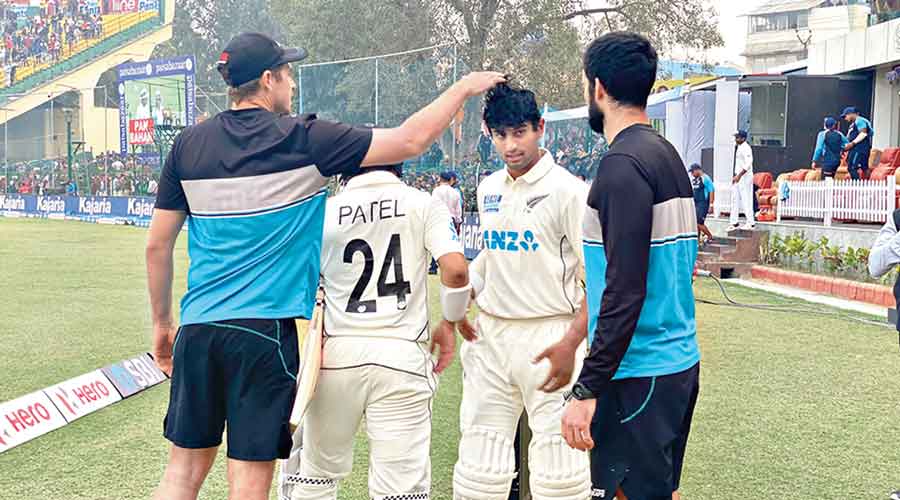 The two icons after whom Rachin Ravindra has been named after, Sachin Tendulkar and India head coach Rahul Dravid, would certainly have been happier if the 22-year-old had represented Team India.

New Zealand skipper Kane Williamson, however, was all praise for the Wellington-born Indian-origin left-handed batsman, who battled for 91 minutes and kept away as many balls en route to his 18 not out on the final day in Kanpur, helping New Zealand earn a draw in the first Test despite losing nine wickets.

Well and truly, this was a massive effort in what was also Ravindra’s debut Test.

“He (Rachin) brings in an all-round package for us and generally bats at the top of the order. So having him in the side helps to strengthen our batting while he can bowl a few overs as well.

“For sure, it was an amazing experience to have in his first Test to be there till the end, something he will remember for a long time. No wonder he, as well as Ajaz (Patel), showed a lot of determination to bat those few overs in fading light,” Williamson said at the post-match news conference.

Having to deal with what, according to Williamson, was “a fairly disjointed preparation”, the skipper and the rest of the Black Caps contingent seemed quite pleased to have forced India into a draw even though they didn’t have too big a target to chase down.

“When a win was out of question, draw was the next best option to try and fight for. A number of really valuable contributions after a fairly disjointed preparation helped us,” Williamson emphasised.

“But of course, it’s important that we look to make those adjustments quickly,” the captain added.

Elaborating on why New Zealand shut shop so early in their run chase, Williamson said: “There was a lot of hard work to do to give ourselves a chance to chase versus trying to chase too early and finding ourselves in a sticky position.

“So it was a matter of trying to take it deep and then if we got close, we would have had a crack if we’re in the right position. But we weren’t in the end.”