India vs Ireland: Chance to plug holes in armour 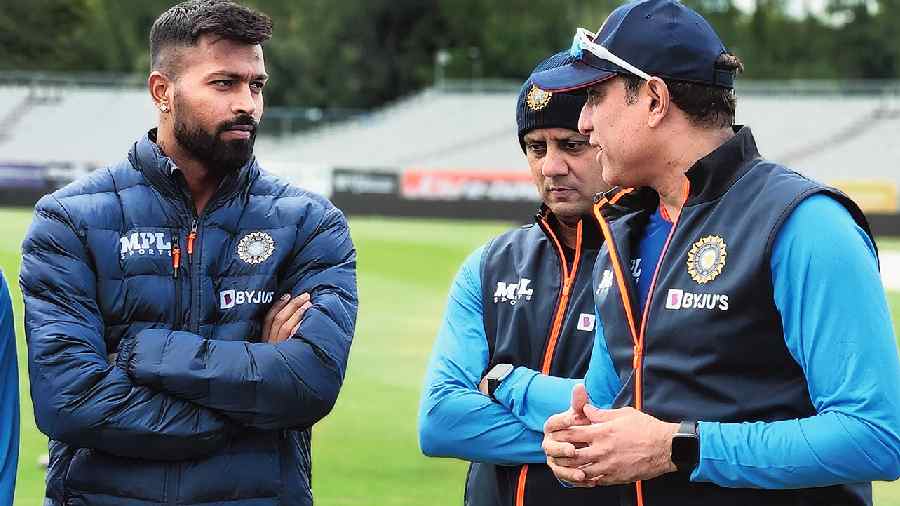 VVS Laxman (right), India coach for the Ireland series, speaks to captain Hardik Pandya during practice at the the Malahide Cricket Club on Saturday, the eve of the first T20I.
Twitter
Sayak Banerjee   |   Calcutta   |   Published 26.06.22, 12:45 AM

India’s process of firming up the side ahead of the T20 World Cup resumes with the first T20I versus Ireland at Malahide in Dublin on Sunday.

The recent home T20I series versus South Africa, which was the unofficial Round I of the process, did give some idea about the ability of India’s back-ups and reserves who would be having two more opportunities to showcase their skills and abilities.

But the question that comes to mind is, will the Irishmen be competitive enough to test the Hardik Pandya-led unit? The Andy Balbirnie-led side couldn’t have sufficient amount of game-time in the lead-up to this series due to rain.

The Indians, however, seem focused on the task lying ahead of them instead of trying to figure out the strengths of their opponents. “Itcomes down to the mental strength and how better you can get with it,” skipper Pandya said on Saturday.

“Playing just two matches isn’t all that easy to get yourself pumped up. But at the same time, we are playing for India, so we have to bring out our A game, which we will.”

Performing the head coach’s role of this team as Rahul Dravid is with the Test squad in England for the one-off game at Edgbaston, National Cricket Academy (NCA) chief VVS Laxman is also making sure there’s no laxity on the part of the cricketers.

“The conversations between me and the coach are simple. He’s on the same path where we want to make sure the attitude and the approach are the same as we play any other game or a World Cup game,” Pandya stated.

“He’s here to make sure the culture and pathway towards the World Cup, which has been set by Rahul Sir and (regular captain) Rohit Sharma, will be the same and we’ve got to be following that.”

Rishabh Pant and Shreyas Iyer being busy with the Test squad in England means the batting order will obviously be having a couple of changes at least.

One of them will most certainly be Suryakumar Yadav, who returns after recovering from a left forearm injury. Whether Suryakumar bats at No.3 or 4 remains to be seen, while Pandya and Laxman will also need to finalise who dons the wicketkeeper’s gloves: Ishan Kishan or Sanju Samson?

The in-form Kishan, one of the openers, can also play just as a specialist batsman.

But India can certainly fancy having a new opening partner for Kishan in place of Ruturaj Gaikwad, who scored only one fifty earlier this month against the Proteas.

The likes of Deepak Hooda and Venkatesh Iyer didn’t get even one game in the South Africa series, so they too are in the queue for an opportunity.

The Bhuvneshwar Kumar and Yuzvendra Chahal-led bowling attack did bounce back in spite of cutting a sorry figure in the first two games versus South Africa. However, this series appears to be the ideal scenario to unleash Umran Malik. Or, a chance or two might also be given to the disciplined left-arm quick Arshdeep Singh. The management can also afford to draft in leg-spinner Ravi Bishnoi in place of either Chahal or Axar Patel, as he too was one of the players warming the bench during the South Africa T20Is.