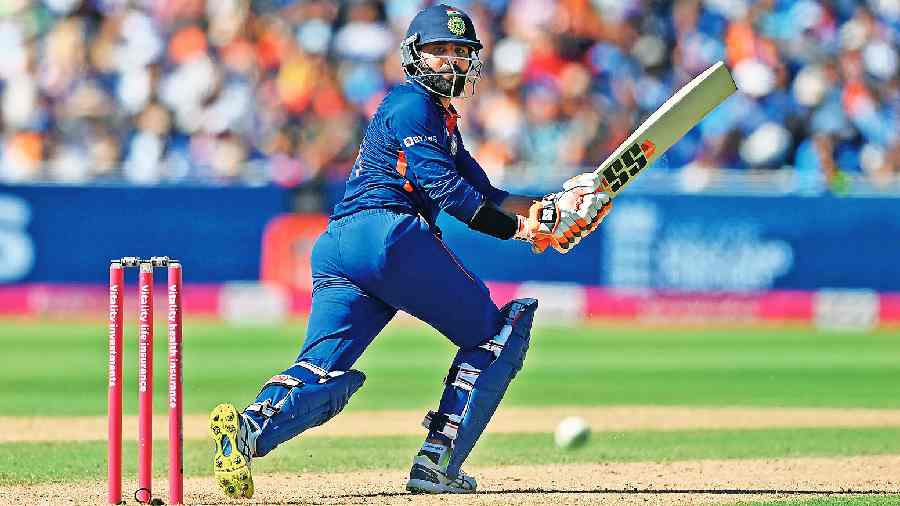 India’s fresh approach to T20 batting, which is based more on an aggressive intent, promised another formidable total given the flier they were off to in Birmingham on Saturday.

Captain Rohit Sharma and his new opening partner Rishabh Pant (replacing Ishan Kishan) helped India whack 61 in the Powerplay overs after England won the toss and opted to bowl in this second and penultimate T20I. But 34-year-old debutant Richard Gleeson (3/15) and Chris Jordan (4/27) utilised the Edgbaston wicket well and kept targeting the good-length spot, limiting India to 170 for 8.

However, led by the consistent Bhuvneshwar Kumar (3/15 in 3 overs), India’s bowlers delivered once again and guided their side to yet another comprehensive win that also sealed them the series with a game to spare. Just as it was in the first T20I, England had no game plan as such in terms of their batting once openers Jason Roy and skipper Jos Buttler were dismissed early again before they eventually imploded, getting bundled out for 121 in 17 overs as India strolled home by 49 runs.

This was India’s fourth successive T20I series victory over England.

Earlier, things certainly looked awry for India as they slipped to 89/5 in the 11th over even after Rohit (31) and Pant (26) smashed 49 inside the first five overs with their exhilarating strokeplay. But Ravindra Jadeja (46 not out off 29 balls), who remained calm and composed right through his stay, played a crucial knock that helped India post a total that was competitive to say the least.

Dinesh Karthik (12) couldn’t score too many but did contribute in some way by forging a 33-run partnership with Jadeja (who came in the place of Axar Patel), which helped calm India’s nerves after they had lost half their side in a space of just 40 runs once the opening pair was separated.

Bhuvneshwar Kumar’s prodigious swing and disciplined bowling then brought India right back into the game as he dismissed  Roy and Buttler, within the first three overs of the hosts’ reply — with only 11 on the board.

Then, Jasprit Bumrah (2/10 in 3 overs), who came in for the impressive Arshdeep Singh, produced a wonderful delivery  to rattle the stumps of Liam Livingstone, before Yuzvendra Chahal dismissed Harry Brook and Dawid Malan in the two overs he bowled.. England had very little steam left after being reduced to 55 for 5 inside 10 overs. With all-rounder Hardik Pandya getting the better of a set Moeen Ali thereafter, India had practically shut the door on England who were made to look clueless right through their reply.

This was Virat Kohli’s first T20I appearance since the February 18 game versus the West Indies at Eden Gardens. The former India captain replaced Deepak Hooda, who aggregated 184 runs at a strike rate of 178.64 in his last three T20I appearances.

But how did Kohli fare? After facing two balls and scoring a single off them, he attempted what was an inexplicable shot and gifted his wicket away to Gleeson, who was overjoyed with Rohit and Kohli being his first two strikes on debut.

The team management seriously needs to consider whether they should continue with someone who’s lean patch keeps on getting extended at the expense of another youngster.