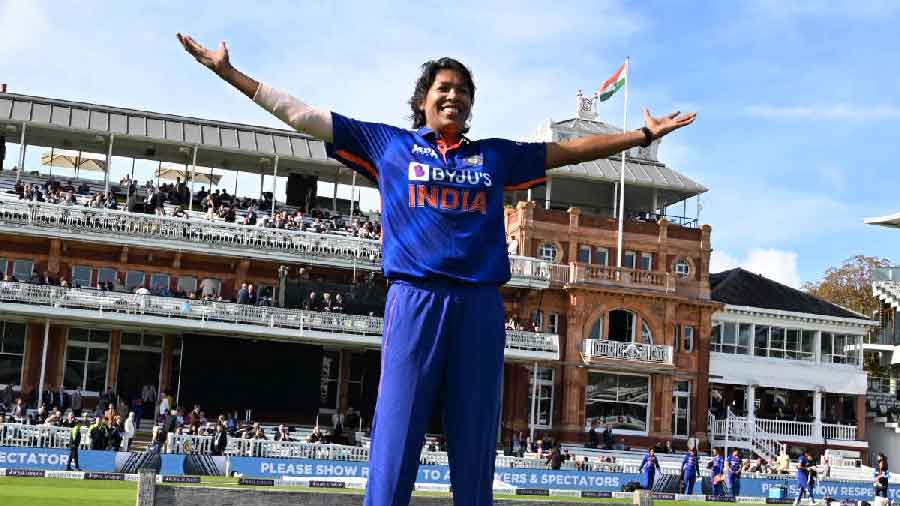 For more than two decades, Jhulan Goswami carried the burden of India’s bowling on her shoulders. One of the fastest bowlers, she holds the record for most wickets (355) across formats in women’s cricket.

Having inspired a generation of cricketers around the world, Jhulan, 39, bowed out at Lord’s last week after India won the ODI series. She spoke to The Telegraph on Wednesday.

Q: Have you got used to life as a retired cricketer?

A: I haven’t really, mainly because of the number of interview requests that have been coming every day... Also because of the Durga Puja fervour around, I haven’t had the time to really reflect on what has happened... Maybe once all this gets over, it will hit me hard.

Q: Why this decision to retire? Was your body not coping with the stress?

A: Absolutely, you are spot on. For a medium pacer after a certain age, the recovery process takes a bit longer than usual. You will always get to realise that since you know your body well. The freak injuries will take time to heal... The body isn’t supporting me as it was earlier and I could make it out for some time. I was in two minds for a while and finally decided that I shouldn’t delay it further and called it a day.

A: That was related to maintaining my workload. I had suffered a few injuries and though Test cricket wasn’t in place then, I thought if I concentrated on playing only ODIs it would be of great help. That will allow me enough time to recover and I wouldn’t have to play back-to-back series.

Q: How did you maintain your fitness all these years?

A: As a medium pacer I had to stay fit. Bowling is an art and it requires a lot of athleticism, power, stamina... If the body cannot cope with such a workload it will tend to break down. I had to train hard and follow a process to keep myself in good shape.

Q: You have said that there was an upswing in women’s cricket after the 2017 World Cup where India lost to England in the final. Can you explain the reasons?

A: I meant the way people got interested and started following women’s cricket on social media was something which didn’t happen before. We were able to create an expectation that this team could play even better. We could set an example before the younger generation which mattered a lot. People accepted us which led to a huge boom in the game.

Q: You also got adequate support from the BCCI...

A: The Board’s support was always there. We could have done better earlier too... Unfortunately, we lost in the semi-finals but in 2017 we excelled as a team. We believed we could have won and that helped.

Q: Have you been surprised by the response your retirement generated?

A: I wasn’t 100 per cent aware of what was going on. If you notice, I hadn’t spoken a word and gave a statement only a day before the game. There was speculation in the media but I never said anything. I wanted to focus on the game and didn’t wish to be disturbed by anything from the outside world. I was determined to make my last series memorable. I wanted to enjoy the moment since I wouldn’t be around anymore.

Q: Did you feel a vacuum after bowling the last over at Lord’s?

A: I felt sad at the thought that I would never get to bowl in the India blue jersey. All my efforts and hard work right through had been to excel in these colours. Various memories came flooding back... Before I delivered my last ball, I was heartbroken thinking I would never get to perform again in an international match. But I had to concentrate on maintaining the right line and length so that it would remain memorable... It was a different feeling, it’s still fresh, but I just can’t explain it.

A: Frankly, I wasn’t given any reason for being stripped of the captaincy. Maybe my plans didn’t go down well with the selectors then. I was looking forward to the 2013 World Cup and had backed the youngsters. I wanted them to play more matches and gain experience before the big event. I believed in that process and wanted the team to follow that. The selectors may have differed but I accepted it as a part of life. Not everything will fall into place according to your plans.

Q: Did that captaincy episode leave a bitter feeling?

A: I don’t want to look back and think about it. I consider myself fortunate enough to lead my country.

Q: You never got involved in any controversy in the team. How did you stay that way?

A: I never wished to get involved in any controversy. My aim was always to give my best for the country. I was never aware of anything else in the dressing room besides my game. My commitment to the team mattered and was hell-bent on performing day in and day out. I had to earn my place in the side and was committed to doing well. My focus was always on winning and taking women’s cricket to greater heights.

Q: You inspired lots across generations. At the end of the day, you must be having a satisfactory feeling...

A: I don’t know who all I inspired but can only say that there was no dearth of commitment and effort. I never made any compromises when I wore the India jersey. That will remain the best gift for all my life.