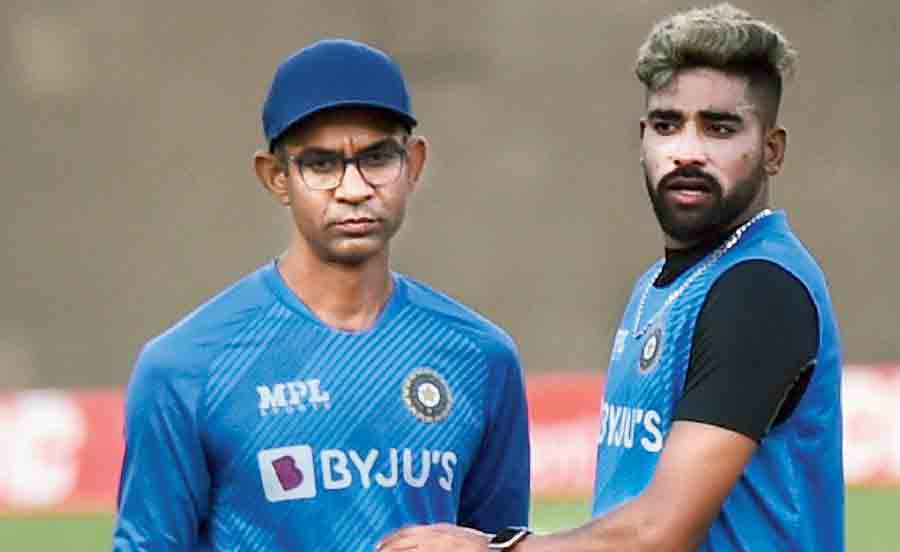 Mohammed Siraj (right) receives treatment for an injury to his hand during training in Ahmedabad on Tuesday.
PTI
Agencies   |   Published 09.02.22, 01:51 AM

Mohammed Siraj appears to be in the driving seat of his career at present, but the situation was drastically different a few years ago when poor performances led to criticism and he had to hear comments like “quit cricket and go back and drive autos with your father”. But that he didn’t give up was thanks to some words of wisdom from Mahendra Singh Dhoni.

This was after a poor IPL season in 2019 with the Royal Challengers Bangalore. The pacer could manage only seven wickets from nine games at an economy rate close to 10 as his team lost six straight matches to finish at the bottom. Siraj’s worst came against the Kolkata Knight Riders when he was hit for five sixes and gave away 36 runs in 2.2 overs, which included two beamers.

“When I bowled those two beamers against KKR, people said ‘quit cricket and go back and drive autos with your father’,” Siraj told The RCB Podcast.

“There were so many such comments. And people don’t see the struggle behind all this. But I remember, when I first got selected how Mahi bhai (Dhoni) told me to not listen to everything the people have to say about me. ‘You do well today and they’ll praise you and when you don’t the same people will abuse you. So don’t ever take it seriously.’

“And yes, the same people who trolled me incessantly back then say ‘you’re the best bowler bhai’. So, I know. I don’t want anybody’s opinion. I’m the same Siraj I was back then.”

The 27-year-old has shaped himself as one of the important pacers in the Team India set-up and is also one of the three players retained by RCB ahead of the mega IPL auction.

Siraj impressed the world during India’s tour of Australia but he faced a personal tragedy during the same tour when he lost his father.

With travel restrictions in place owing to the Covid-19 pandemic, Siraj couldn’t see his father before taking off for the tour of Down Under as he flew with the team directly to Australia after the conclusion of the IPL in the UAE.

“Dad wasn’t keeping well in 2020. So whenever I used to speak to him, we were always crying on the call. So I didn’t talk a lot with him because he’d keep crying and it made me feel very helpless,” Siraj revealed. “When the IPL got over, nobody told me dad was so seriously ill. Whenever I called or asked, they’d say he’s sleeping or he’s resting, so I’d tell them ‘okay don’t disturb him’. It was only when I reached Australia that I got to know that dad was in such a critical condition.

“When he finally spoke to me, all he asked of me was to focus on playing for the country, fulfilling my dream and making the country proud. That’s all I remembered and that’s the only reason I stayed back. I thought of leaving the day he passed, but his words were the only thing that kept me back in Australia.”