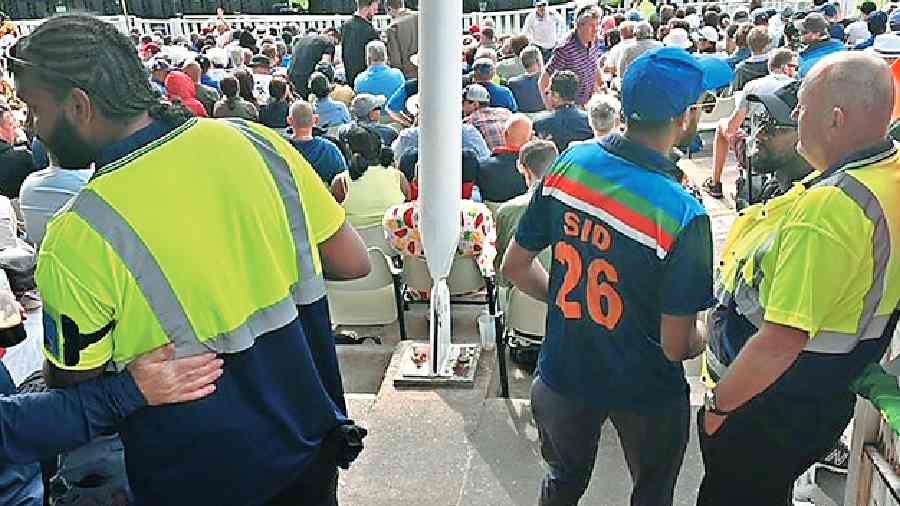 A picture of the stands tweeted by an Indian fan to report racist behaviour in Edgbaston on Monday
Sourced by The Telegraph
PTI   |   Birmingham   |   Published 06.07.22, 01:28 AM

An investigation has been launched into allegations of racist abuse aimed at Indian fans during the fourth day of the fifth Test between India and England at Edgbaston, the ECB and Warwickshire County Cricket Club said.

Several Indian fans took to Twitter to report racist behaviours they endured during the fourth day’s play on Monday night. They claimed that some British fans hurled racial taunts at them.

Former Yorkshire cricketer Azeem Rafiq, whose testimony to a British parliamentary committee last year led to an investigation into claims of institutional racism at Yorkshire and resulted in major reforms, retweeted some of the social media posts describing the racist behaviour. “Disappointing to read,” he wrote.

Warwickshire later released a statement, stating they are investigating the incident.

One spectator, who was in the Hollies Stand, alleged that the stewards refused to take any action despite several complaints. “Racist behaviour at @Edgbaston towards Indian fans in block 22 Eric Hollies. People calling us Curry C**** and paki b*******. We reported it to the stewards and showed them the culprits at least 10 times but no response and all we were told is to sit in our seats. @ECB_cricket.”

“We were also fearful of our safety for women and children but no assistance when we left. This is unacceptable in today’s society @BCCI #ENGvIND,” a spectator said in a series of tweets.

New Zealand Cricket and the players’ association signed a five-year deal on Tuesday that will see male and female cricketers receive equal pay.

The agreement will see women’s players at both international and domestic level receive the same match fees as men across all formats and competitions.

“This is the most important agreement in our sport, as it binds NZC, the major associations, and our players at the hip, and sets the foundation to fund, grow and develop cricket,” said NZC Chief Executive David White.

“It’s great for the international and domestic women players to be recognised in the same agreement, alongside the men,” said White Ferns captain Sophie Devine.