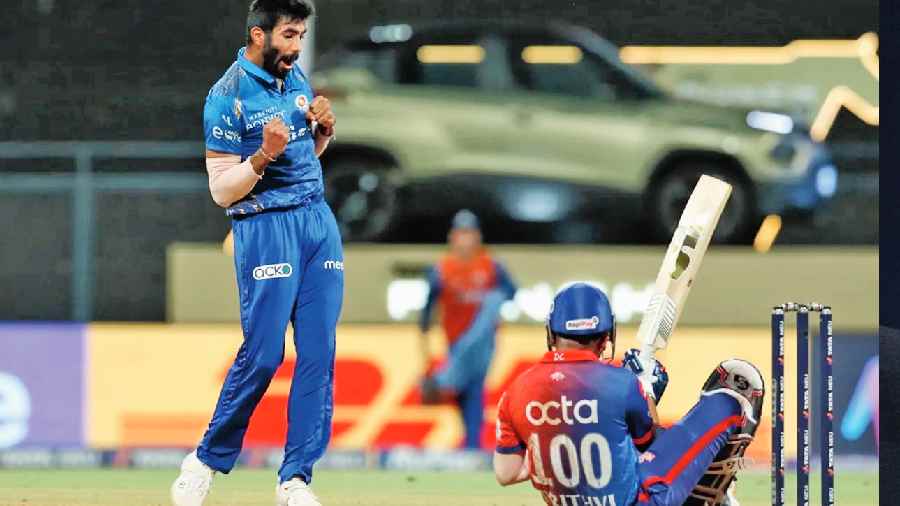 In what was a must-win clash for them to make the playoffs, Delhi Capitals got off to a woeful start after Mumbai Indians put them in to bat at the Wankhede on Saturday.

They somehow managed to post 159 for 7, having recovered from Jasprit Bumrah’s strikes, courtesy captain Rishabh Pant (39) and Rovman Powell (43). They were in control during Mumbai’s run chase too, but Pant’s blunder in not going for the review when Tim David edged his very first ball behind the stumps cost Delhi dear and crushed their playoff hopes.

Delhi’s five-wicket defeat meant Eden Gardens would be witnessing a back-in-form Virat Kohli and Royal Challengers Bangalore in the Eliminator on Wednesday against Lucknow Super Giants. RCB finished as the fourth-placed team in the standings.

Two big reasons for Delhi’s ouster and RCB going through was Pant’s huge error and then David (34 off 11 balls), coming in at No.5, making full use of it. Another find for Mumbai in their disappointing season, David, having proved his clean-hitting ability in the previous games, banked on his hand-eye coordination to clobber four big sixes and two boundaries that eventually took Mumbai home with five balls to spare in their final appearance this season.

It was a tall order for Mumbai when David appeared at the crease, with still 65 needed off just 33 balls. But in spite of a noise heard, the Delhi skipper inexplicably didn’t go for the review, much to RCB’s joy.

Tim David during his 11-ball 34 at the Wankhede on Saturday.
Twitter

Underlining his level of commitment, Bumrah (3/25) bowled a spell where all his three wickets came off excellent deliveries. His first, that of Mitch Marsh, deviated slightly after pitching and got the latter to edge it at slip. Prithvi Shaw then was out to a snorter.

Bumrah executed his yorker-length ball to perfection to yank out Rovman Powell’s off stump.