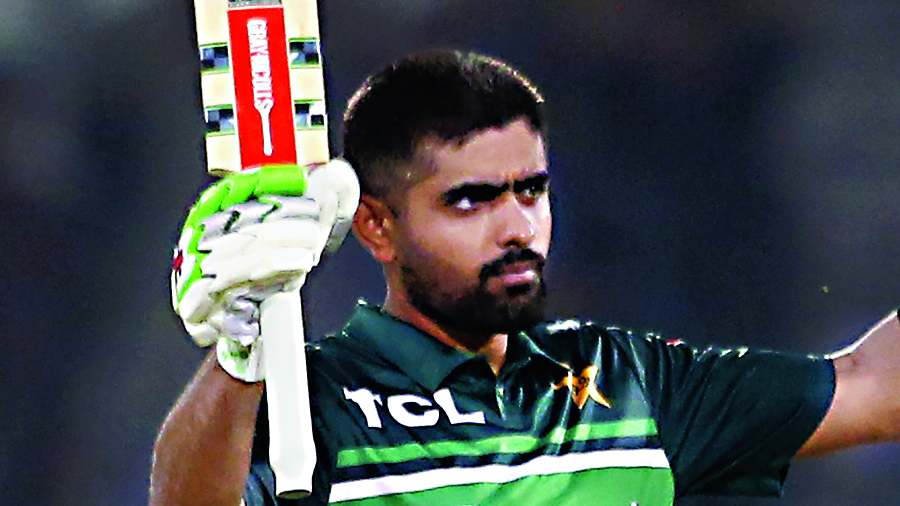 Pakistan captain Babar Azam after completing his century against the West Indies on Wednesday.
AP/PTI
Our Bureau   |   Published 10.06.22, 03:18 AM

Babar Azam, in the form of his life, is dealing in records at the moment.

The Pakistan captain scored his 17th ODI century as his team beat the West Indies by five wickets on Wednesday. His innings of 103 was also his third consecutive century in the format, having hit two hundreds against Australia in the last two ODIs he played. By doing so, he became the first batsman to twice score three consecutive centuries in ODIs, having done so earlier in 2016.

But that’s not all, the No.1 ODI batsman on Wednesday also became the fastest player to reach 1000 runs as captain. He reached the milestone in 13 innings, bettering Virat Kohli’s mark of 17 innings.

Pakistan Cricket Board chairman Ramiz Raja considers the 27-year-old as the best all-format batter in contemporary cricket. “Babar walking to a hundred and showing yet again why he is the best all format batsman in the world…,” the former captain tweeted.

Babar himself stays grounded and focused. “My aim is to continue working on my strength and my game,” the right-handed batsman said after the win in Multan.

Babar, by the way, is not just winning matches, he is winning hearts as well. On Wednesday, he handed over his ‘Player of the Match’ trophy to teammate Khusdil Shah, who finished the game for Pakistan with an unbeaten 41 off 23 balls. Good batsman, even better captain.