The elegant lefthander made amends in Karachi where he shelved the reverse sweep and made an unbeaten 127, which included 13 fours and a six 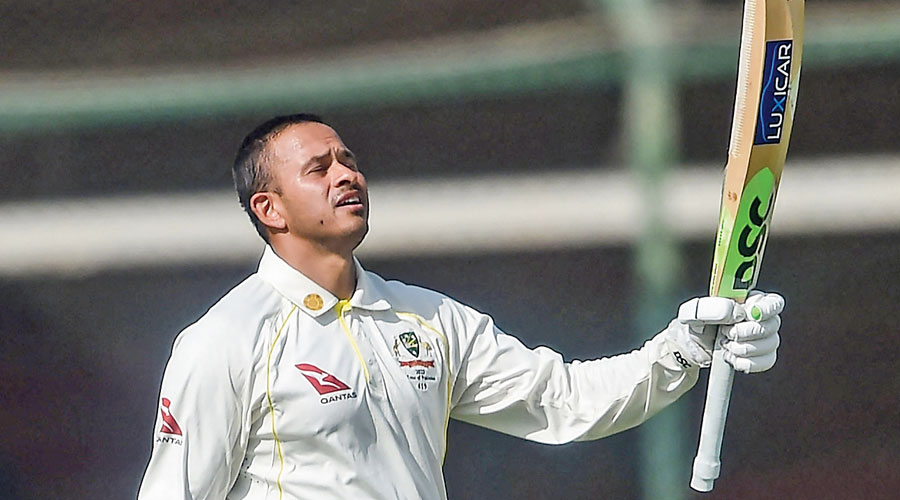 Usman Khawaja celebrates after completing his century in the second Test against Pakistan on Saturday.
Twitter
Reuters   |   Karachi   |   Published 13.03.22, 03:08 AM

Usman Khawaja smashed his 11th Test hundred and forged a 159-run partnership with Steve Smith to power Australia to 251 for three on the opening day of the second Test against Pakistan on Saturday.

Islamabad-born Khawaja had fallen agonisingly short of a hundred in the opening Test in Rawalpindi where he top-scored for his side with a breezy 97.

The elegant lefthander made amends in Karachi where he shelved the reverse sweep and made an unbeaten 127, which included 13 fours and a six.

Smith made 72 before falling to Hasan Ali in the penultimate over of the day. Nightwatchman Nathan Lyon was yet to open his account.

“It would’ve been nice to have Smith there at the end too but we had a good partnership,” Khawaja said. “We’ve still got plenty of batting to come.

“It started to reverse in the second session and made it tough to score against the pace bowlers.”

Earlier, Australia got off to a strong start after captain Pat Cummins elected to bat on a dry surface at the National Stadium.

Khawaja looked in sublime touch and scored freely on the leg-side after being fed regularly on his pad. His opening partner David Warner was less convincing, though, surviving a couple of leg before appeals and getting hit on his shoulder by a short delivery from Hasan Ali.

Warner hit Sajid Khan for a six to bring up Australia's 50 in the 11th over. Sajid conceded two more sixes in his fourth over, prompting Pakistan captain Babar Azam to take the spinner out of the attack.

Seamer Faheem Ashraf broke the 82-run opening stand with a back of a length delivery that Warner, who made 36, could only edge to Mohammad Rizwan behind the stumps.

Pakistan tasted a second success soon afterwards when Sajid ran out Marnus Labuschagne for a duck with a direct throw from mid-off.

Khawaja and Smith steadied the ship batting through the second session. Khawaja took a single off Nauman Ali to bring up his third hundred in four Tests since his recall in January after more than two years’ absence.

Pakistan spinners resorted to a negative line after tea, bowling way down the leg side, to stem the run flow and the batsmen were happy to just pad them away.

“In the last session, they bowled pretty leg side and had some negative plans to see if we'd play some shots,” Khawaja said. “We decided not to and didn’t want to give them any free wickets.”