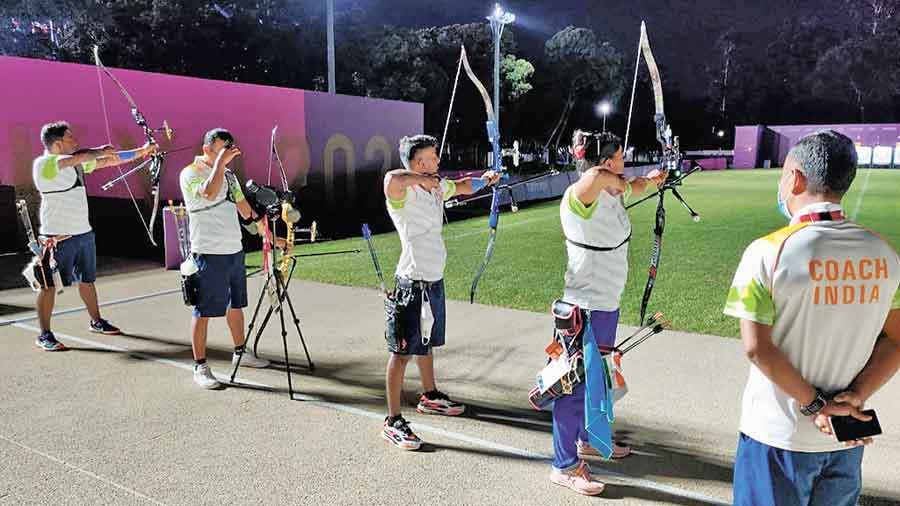 India archers in Tokyo practise under flood lights on Wednesday. They begin their competition on Friday.
PTI
Our Bureau, Agencies   |   Calcutta, Tokyo   |   Published 23.07.21, 01:20 AM

Confusion ruled over clarity as India announced the list of 20 Indian athletes from seven disciplines and six officials for the Olympic Games opening ceremony on Friday.

As expected, Covid-19 concerns and competitions lined up the next day led to a majority of the contingent deciding to stay away from the event.

But of the 20 athletes, it has been learnt some are not willing to be at the ceremony since they have events lined up on Saturday.

For the record, table tennis players Manika Batra and Sutirtha Mukherjee have their ties and Manika and Sharath Kamal have their mixed doubles match. All three, along with Sathiyan Gnanasekaran’s name, are on the list. “It’s surprising,” an official, who refused to be named, told The Telegraph.

Athletes from disciplines like shooting, badminton, archery and hockey will skip the ceremony as the Indian delegation is not willing to expose them to the risk of contracting the virus with their events lined up on Saturday.

From hockey, only flag-bearer Manpreet Singh, the men’s team captain, will participate in the ceremony. Manpreet will be leading the side out for the first Pool A game against New Zealand on Saturday.

Fencer Bhavani Devi, gymnast Pranati Nayak and swimmer Sajan Prakash along with eight boxers will also be there.

Apart from MC Mary Kom, who is also a flag-bearer alongside Manpreet, Lovlina Borgohain, Pooja Rani, Amit Panghal, Manish Kaushik, Ashish Kumar and Satish Kumar will participate in the ceremony.

India is being represented by more than 125 athletes in the Games with the overall contingent size being 228, including officials, coaches, other support staff and alternate athletes in view of the Covid-19 pandemic.

“The march past will be in Japanese alphabetical order and India’s number is 21,” he added. “Both the flag-bearers, i.e. MC Mary Kom and Manpreet Singh, are participating in the opening ceremony,” Batra said.

IOA secretary-general Rajeev Mehta had earlier stated that no more than 50 will attend the ceremony. Only six officials from each country are being allowed take part in the march past.

Among other countries, Great Britain will have no more than 30 athletes taking part in the ceremony owing to Covid-19 concerns.

Top seed and world no.1 Amit Panghal (52kg) was among four Indian boxers who got byes into the pre-quarterfinals. Panghal will step into the ring on July 31 in the last-16-stage.

In the women’s competition, Mary Kom (51kg) will square off against Dominica’s Miguelina Hernandez on July 25 and up next for her would be Colombian third seed Ingrit Lorena Victoria Valencia, who is the 2016 Olympic bronze medallist.

Indian archers begin their campaign with the rankings round on Friday. The biggest prospects are the husband-wife duo of Atanu Das and Deepika Kumari who would look to recreate the magic of the Paris World Cup in the mixed pair competition that would make its Games debut on Saturday.