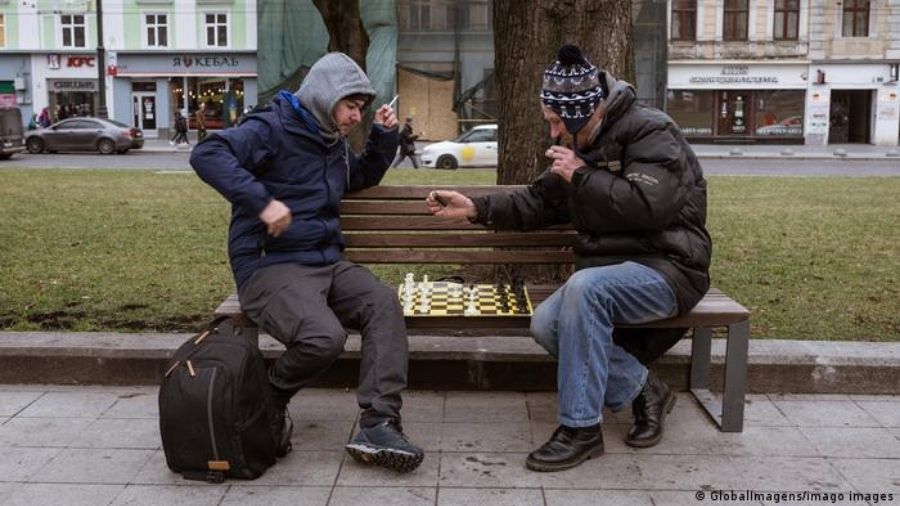 Ties between Russia and Ukraine have traditionally been strong in chess. But the war threatens to destroy that relationship. The world federation has sanctioned Russia and Belarus but is itself in the spotlight.

"Gens una sumus" is the Latin motto of the world chess federation, FIDE, which translates as "We are one family." But the Russian invasion of Ukraine is threatening to tear this family apart.

Instead of showing off their skills on the board, many well-known Ukrainian chess players, such as Oleksander Sulypa, are now protecting their country —with a gun if necessary.

"I am defending my land from enemies and 'peacekeepers.' The truth will win!" the captain of the Ukrainian national chess team wrote on Facebook.

His fellow chess professional, Pavel Eljanov, is also not leaving his homeland.

"I am with my family in relative safety in western Ukraine," the grandmaster, who hails from embattled Kharkiv, told DW.

He is trying to come to terms with the situation and supports the sanctions against Russia and Belarus announced by FIDE on Wednesday.

Individual players from the affected countries will, however, still be allowed to compete under the flag of the world federation.

"A ban for team competitions is quite clear," said Eljanov. He would find a general ban on individual Russian players too harsh at the moment, he added. Some of his colleagues, however, disagree.

In an open letter, 28 grandmasters from Ukraine have demanded Russia's complete exclusion from international competitions and the resignation of FIDE President Arkady Dvorkovich, who is from Russia.

The conflict has hit the chess world particularly hard because Ukraine and Russia are absolute heavyweights.

Not only do they produce outstanding individual players, but for decades they have almost always been among the top three nations in the Chess Olympiad, the most important team competition.

"The common roots of this chess passion lie in the Soviet era," explained DW chess expert Holger Hank. "That's why the two countries' ties in chess are very close."

Appeal from Russia: 'Stop the war!'

After the outbreak of the war, Russian players inquired about how Eljanov was doing and offered him help. This attitude does not seem to be an isolated case. In chess, unlike in other sports, there are also voices in Russia that have taken a public stand.

"We are for peace. Stop the war!" read a written appeal to President Vladimir Putin signed by 34 Russian grandmasters – including world championship runner-up Ian Nepomniachtchi.

FIDE chief Dvorkovich is under pressure because he has had close ties with the Kremlin in the past. The 49-year old was part of Russia's political elite until 2018. The economist, who is considered liberal, was Russia's chief negotiator at G-8 meetings and deputy prime minister for six years.

"Wars are the worst things one might face in life…including this war," he said in an interview with US internet portal Mother Jones. "Wars do not just kill priceless lives. Wars kill hopes and aspirations, freeze or destroy relationships and connections."

He said his thoughts were with Ukrainian civilians.

Such remarks are risky for him personally. "He could be prosecuted for this assessment," DW Moscow correspondent Juri Rescheto underlined.

"He uses the word 'war', which under a new media law can be interpreted as discrediting the Russian armed forces and punishable by up to 15 years in prison."

It is unlikely that the most powerful man in the world chess federation, who is seeking reelection as FIDE president in May, is only concerned with electioneering.

"In another interview, he made critical comments about the economic sanctions against Russia, so his response is still somewhat mixed for me," he said.

DW chess expert Holger Hank agrees: "It's a tightrope walk. Dvorkovich apparently wants to be reelected as FIDE president in the summer and is therefore publicly distancing himself from Putin."

For Ukrainian grandmaster Eljanov, it's not just about the Russian FIDE president. He believes chess celebrities who support the attack on Ukraine should suffer permanent consequences.

He is clearly referring to former world champion Anatoly Karpov, who sits as a deputy in the Russian Duma and voted for the attack on Ukraine, as well as top player Sergey Karjakin.

The 32-year-old Karjakin was born in Ukraine but has played for Russia since 2009. Six years ago he lost his challenge to world champion Magnus Carlsen.

On Twitter, Karjakin has been agitating against Ukraine since the war began, portraying it as the aggressor and mocking the victims of the war.

"He should not be allowed to play internationally anymore," demanded Eljanov.

Such cases should not distract from the fact that large parts of the chess world including those in Russia oppose the war and show solidarity with Ukraine. Asked about FIDE's guiding motto, Eljanov doesn't hesitate for a second: "I feel it 100%."

Since the outbreak of the war, he has received hundreds of messages and offers of help "mainly from Europe, but also beyond," he said. "That means a lot to me."

This article was originally published in German.