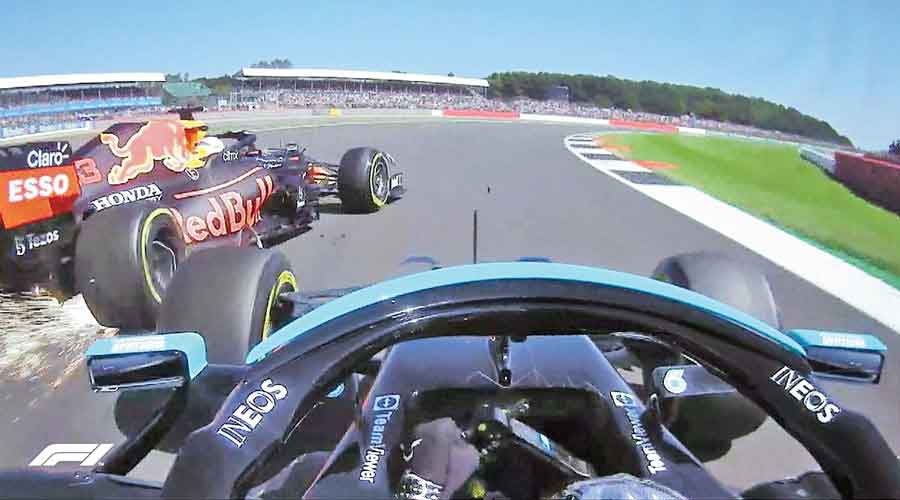 The moment of impact between Red Bull’s championship leader Max Verstappen and Mercedes’ Lewis Hamilton during the British GP on Sunday.
Twitter
AP   |   Silverstone   |   Published 19.07.21, 03:19 AM

Lewis Hamilton roared back from a first-lap incident that sent championship leader Max Verstappen to the hospital and overcame a 10-second penalty to win the British Grand Prix and reignite his title defense on Sunday.

The seven-time champion won at his home track to snap a run of five races without a victory.

He had dropped from second to fifth after he served his penalty, picked up two spots when he returned to the track and then Mercedes teammate Valtteri Bottas was ordered to move out of Hamilton's way.

It gave him 11 laps to chase down leader Charles Leclerc in a Ferrari and Hamilton made the pass for the win with just two laps to go and on the same corner where he had tangled with Verstappen. The British driver was cheered on to his eighth career victory at Silverstone by the passionate home fans, who also gave him a standing ovation.

Hamilton, who then drove a victory lap brandishing the British flag, cut the gap to Verstappen in the drivers' championship from 33 points to eight.

“What a great job guys. Thank you so much for continuing to push this year, I am so inspired by you guys. There's a long way to go but I believe in you guys,” Hamilton said on team radio after the race.

Then he climbed the rail and ran toward the grandstands waving the flag to his adoring crowd.

Verstappen crashed out of the race when a spirited first lap battle with Hamilton sent the Dutchman spinning hard into a barrier, with an impact which registered at 51G.

“With Max, you know he's very aggressive. And then today, I mean I was fully alongside him, and I didn't have enough space,” Hamilton said after the race.

“But regardless of whether I agree with the penalty, I take it on the chin and I just kept working.”

The race was red-flagged to allow for repairs to the tire barrier. Verstappen, wobbly as he climbed from his car, was initially seen in the Silverstone medical center but then transported to a local hospital for further evaluation.

“I hope Lewis is very happy with himself. Lewis has got more than enough experience to know that that's unacceptable.

“I’m just very disappointed that a driver of his caliber should make such a move. It's dangerous. It looked desperate. And he's put a competitor, thankfully uninjured, in hospital. For me, that's a hollow victory.”

Verstappen beat Hamilton at the start for the second day in a row at Silverstone and the two title contenders furiously zigzagged for position. The drivers touched at least twice as Hamilton tried to slip past Verstappen for the lead.

Hamilton's front wheel touched Verstappen's rear wheel the second time the drivers made contact, and the Red Bull careened off course, through the gravel and into the tire barrier. A tire from Verstappen's car bounced off the car during the spin.

Leclerc took over the lead and Mercedes boss Toto Wolff sprinted to race control to argue against any penalty to his driver. Hamilton told his Mercedes team the position in the corner was his and he was not to blame.

“I was ahead going in there, man,” Hamilton radioed.

“I was fully alongside him, my line. Yeah, he turned in on me, man.”

Following a delay of 45 minutes the race restarted with Hamilton starting from second after Leclerc passed him in the moments after his collision with Verstappen.

Hamilton was then slapped with a 10-second penalty which he served at his pit stop on lap 27 of 52. That dropped him to fourth behind Lando Norris, Valtteri Bottas and a dozen seconds adrift of Leclerc.

Hamilton passed Norris on lap 31 before Bottas was ordered out his way by Mercedes. The world champion then set about hunting Leclerc with the gap reduced to just 1.5 seconds with four laps to run.

On lap 50 of 52, Hamilton put his Mercedes on the inside of Leclerc's Ferrari through Copse before backing out of the move, but the Monegasque ran wide and Hamilton assumed the lead to the delight of the partisan crowd.

He crossed the line 3.8 seconds clear of Leclerc with Bottas completing the podium and Norris finishing fourth.