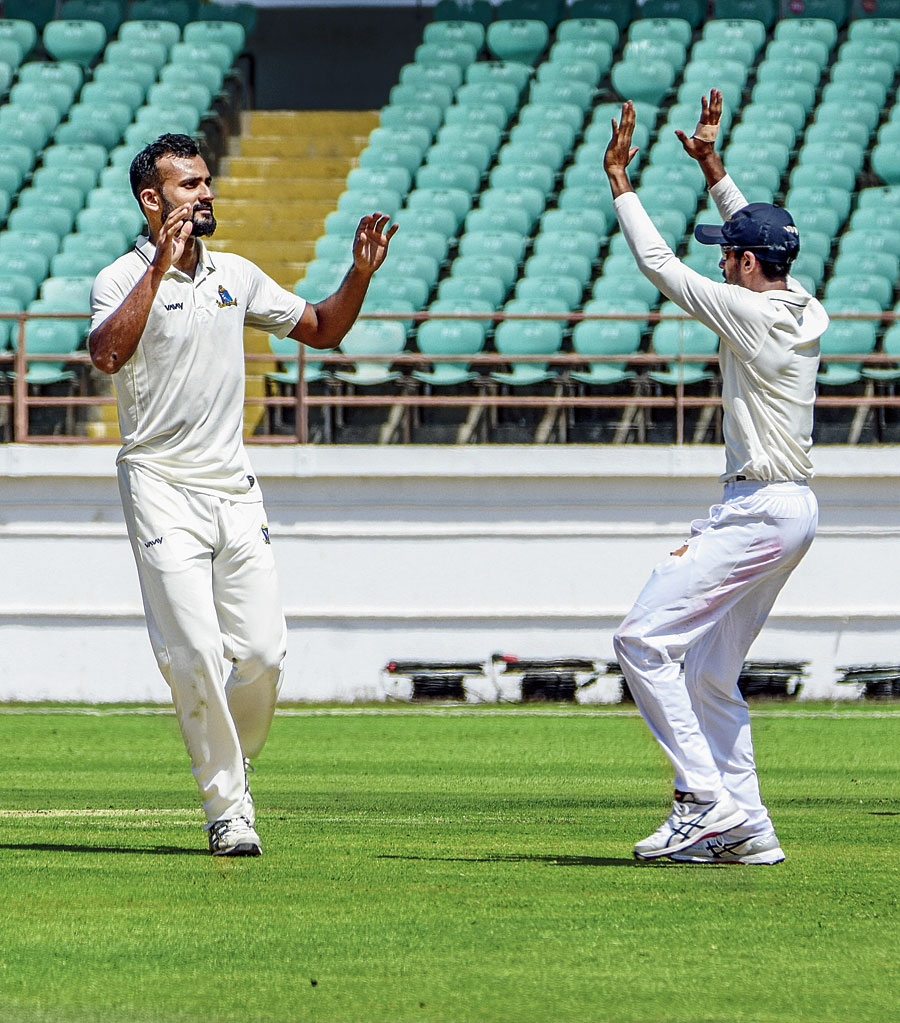 Bengal bounced back late on the opening day, stalling Saurashtra’s efforts to take control of the Ranji Trophy final at the SCA Stadium.

At stumps, Saurashtra were 206 for five, slipping from a comfortable 163 for 2 with Akash Deep (3/41) being the pick of the Bengal bowlers.

Saurashtra were certainly in control after winning the toss and opting to bat first on a pitch with low bounce and not having much on offer for the quicks, but Akash, Ishan Porel and Mukesh Kumar made sure to keep the pressure, which made life tougher for the Saurashtra batsman.

Some credit should also be reserved for Shahbaz Ahmed, who besides giving the much-needed breakthrough by breaking the opening stand, also tied the batsmen down with his tight left-arm spin bowling.

Bowling relentlessly from the pavilion end after being introduced in the eighth over, he even got a few deliveries to bounce awkwardly, especially when bowling over the wicket.

Another problem for Saurashtra was not being able to avail the services of Cheteshwar Pujara, who left the field after feeling unwell, having scored five and faced 24 balls.

He came on to bat late down the order at No. 6, which was surprising initially, till the actual reason surfaced.

At the moment, Bengal are the team to be in a better frame of mind, but the pitch will be in the minds of both sides as the match progresses. From the very first session, the ball started keeping low and it shouldn’t come as much of a surprise if batting becomes even tougher in the coming days.

That way, Saurashtra, wearing black armbands to pay homage to former player Narendrasinh Gohil who died on Sunday, won a crucial toss. But Bengal bowlers, led by Akash, well and truly deserve the kudos for their massive effort to bring the game in balance.

After Shahbaz dismissed Harvik Desai to break the opening stand that yielded the hosts 82, a delivery from Akash held its line to take the edge of the other opener Avi Barot’s (54) bat.

Bengal though, could have had Barot before lunch itself had Porel reacted quickly at square leg, off Shahbaz’s bowling. Barot was on 33 then.

But post his dismissal, Vishvarajsinh Jadeja (54) and Arpit Vasavada looked solid in their half-century stand for the third wicket. But Akash cut short their partnership with an in-cutter that went through Jadeja’s defence.

Soon after, Porel brought one back that kept low and trapped Sheldon Jackson plumb in front. Saurashtra were already finding it difficult as Akash and Porel tried to bowl as many in-cutters as possible.

In what turned out to be the final over of the day bowled by Akash, Bengal used the DRS twice against Chetan Sakariya. The first – a leg-before appeal – got rejected as the ball pitched way outside the leg stump. But in the next, the review did confirm an outside edge of Sakariya’s bat, giving Akash his third scalp for the day.

It definitely was a fantastic review taken by Bengal as they went with Wriddhiman Saha’s judgement. The India wicketkeeper had gone up convincingly after completing the catch. That also turned out to be the day’s last ball.

Bengal should be taking the new ball pretty soon on Day II, hoping to restrict Saurashtra to as modest a total as possible from hereon. The home team, on the other hand, will seriously hope Pujara gets better and resumes his knock.