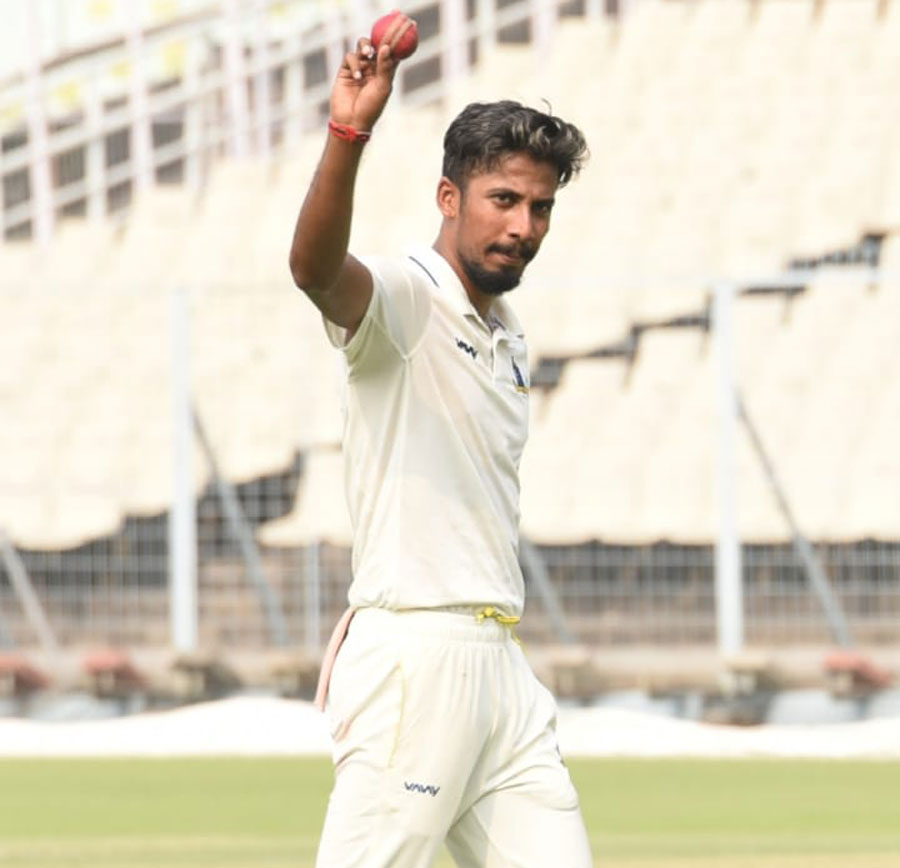 Seven wickets are still required, but it’s fair enough to say that Bengal are inching closer to their first Ranji Trophy final since the 2006-07 edition of the competition.

At stumps on Day III of this semi-final clash here at the Eden, Bengal managed to get rid of three Karnataka wickets including the prized scalp of KL Rahul with the visitors having reached 98.

They need another 254 for victory with two more days to go. It’s a stiff ask as none of the batsmen, including Devdutt Padikkal, who’s batting on 50 after being promoted to No. 3, have looked comfortable out there. Manish Pandey (11 batting) is the other unbeaten batsman and he too seemed far from being at ease.

Ishan Porel, Mukesh Kumar and Akash Deep beat the edges of the bats on several occasions with the ball too starting to reverse towards the end of the day. At the same time, Bengal bowlers too need to try and ensure they accomplish the job by Tuesday itself and not wait till the final day, because there’s a rain forecast.

The quicks have certainly been successful so far in keeping the rival batsmen on a tight leash, but it was also surprising not to see Shahbaz Ahmed bowl a single over in Karnataka’s second innings. While off-spinner Arnab Nandi was given four overs to bowl.

“The ball was moving, so we preferred our pacers to keep bowling,” coach Arun Lal reasoned. “They had the left-handed batsman (Padikkal) in the middle, that’s why Arnab was given the ball for some overs.”

Earlier, barring Anustup Majumdar (41) who enjoyed a fair bit of luck, and Shahbaz (31), the flaws in Bengal’s batting were again reflected as they added only 89 more to their overnight total of 72/4 to be all out for 161 in the second innings.

Sudip Chatterjee again struggled with his fluency and departed having added only five to his overnight score. That too, after Ronit More bowled yet another no-ball, which for the time being had saved Sudip from being dismissed hit wicket.

More, however, had his way when he picked up both Sudip and Sreevats Goswami (out for nought in both innings) off successive balls, before Shahbaz confidently cut the hat-trick ball for a boundary to get off the mark.

It’s largely due to Anustup, who also got a DRS reprieve when on 12, and Shahbaz that Bengal could cross 150 in their second innings. Such a poor show with the bat would surely have been a bigger cause of worry for Bengal if their first innings lead wasn’t sizeable.

Medium pacer Chintan Gaja grabbed a fifer to lead Gujarat’s fightback after they conceded a 52-run first-innings lead against Saurashtra on the third day of their Ranji Trophy semi-final here on Monday.

Gaja (5/15) reduced Saurashtra to 66 for 5 in their second essay at the end of the day three as the hosts took an overall lead of 118 at the SCA Stadium in Khandheri.

The 25-year-old Ahmedabad-born Gaja bowled in the right areas and was handsomely rewarded for his efforts. His scalps included Harvik Desai (0), Kishan Parmar (0), Avi Barot (1), Vishwaraj Jadeja (6) and first-innings centurion Sheldon Jackson (0) to reduced Saurashtra to 15 for 5.

But Arpit Vasavada and Chetan Sakariya stood tall against the Gujarat bowlers till stumps were drawn.