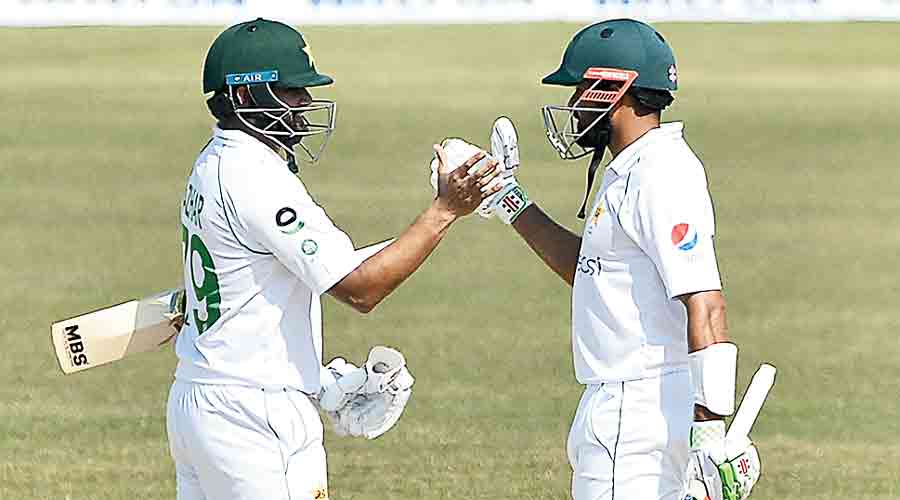 Pakistan reached 161 for two at stumps on the opening day of the second Test against Bangladesh at the Sher-e-Bangla National Cricket Stadium in Mirpur.
The visitors lost openers Abid Ali and Abdullah Shafique in the first session after captain Babar Azam won the toss and chose to bat. However, Babar (60 batting) and Azhar Ali (36 batting) added an unbeaten 91 runs for the third wicket, giving the visitors an early advantage.

Leading the series 1-0, Pakistan could expect a tough challenge from the home side with the return of all-rounder Shakib-al Hasan. Pakistan will again rely on the exploits of their batting unit, which rallied to help them win the first Test by eight wickets.

Bangladesh, on the other hand, will need to be more clinical and aim at finishing ahead in crucial junctures of the game.
Bangladesh’s Mahmudul Hasan, the 21-year-old right-hander, was handed his first Test cap.

Earlier in the day, after winning the toss, Babar decided to bat first. Pakistan openers started from where they had left in the first Test and notched up another 50-run partnership as they dominated the first hour of the day.

But in the second hour of play, Bangladesh spinners got into the act and Taijul Islam sent the two in-form openers back to the hut. The spinners were brilliant before lunch and it looked like they will get more wickets in the next session.

But the experienced duo of Azhar and Babar weathered the storm and have managed to stitch together a partnership of 91 runs. There was a short rain break in the middle session but the final break to the proceedings of the day was put by the fading light and there was no play possible after tea.