Friday was wet and gloomy all day, but Antonio Lopez Habas’ men sang and sang loudly in the rain 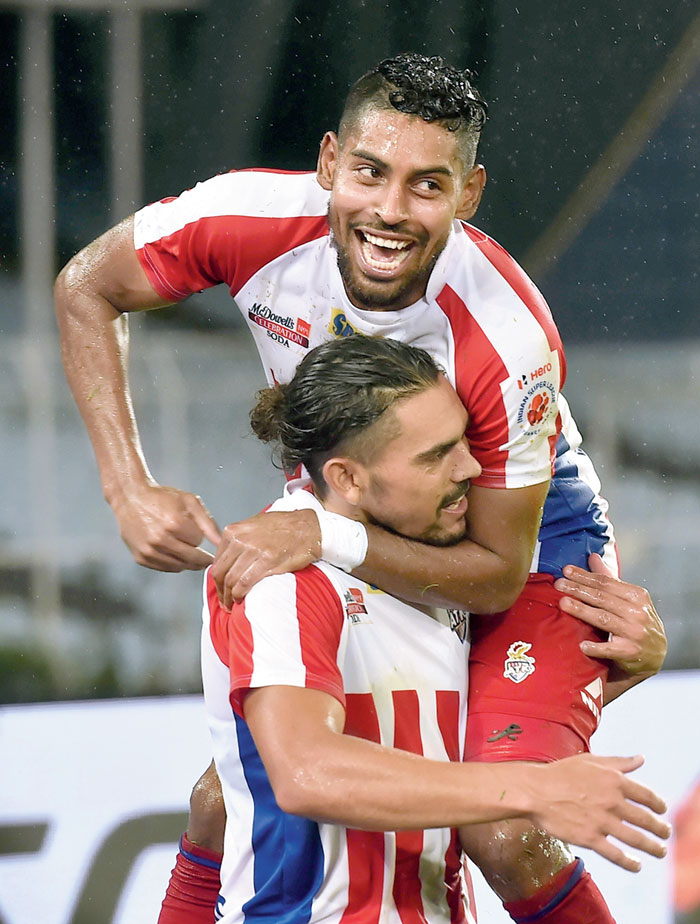 ATK may have hit the jackpot by roping in two frontliners Roy Krishna and David Williams. The duo, who scored tonnes of goals in tandem during their stay with Wellington Phoenix, showed glimpses of what the fans could expect from them on a rain-sodden Friday.

Williams and Krishna found their names on the scoresheet in the first half and substitute Edu Garcia got a brace very late as ATK ran roughshod over a hapless Hyderabad FC winning 5-0 in an ISL VI match at the Salt Lake Stadium. It was also ATK’s biggest win in ISL history.

Williams opened the scoring in the 24th minute and Krishna made it 2-0 three minutes later. A minute before half-time, ATK got their third and Williams his second.

In the 88th minute, ATK rubbed more salt into the Hyderabad FC wound. Prabir Das, who was lively on the right flank, played it across the face of the goal to substitute Edu Garcia who made no mistake. Then in the injury-time, Prabir once again sent in a cross and Edu headed in.

Friday was wet and gloomy all day, but Antonio Lopez Habas’ men sang and sang loudly in the rain.

The 3-5-1-1 formation the Spaniard started with paid off as Hyderabad had no clue what had hit them. Prabir came close in the very second minute; Michael Soosairaj after being freed by a vibrant Jayesh Rane took a shot at the goal only to be denied by the woodwork. Before that Williams’ brilliant long ranger was fisted away by Hyderabad FC goalkeeper Kamaljit Singh. Everything was happening very fast and it was very clear that a goal would come any moment.

It came in the 24th minute. ATK’s Javi Hernandez split open Hyderabad FC’s brittle defence with a delicious through ball and Williams made no mistake to slot it past Kamaljit Singh from a one-on-one position.

The second came three minutes later. This time Krishna hit the back of the net. Williams set him up with a pass from the left flank and the Fijian rifled a shot from outside the box which went in past a diving Kamaljit after striking the inner side of the post. The goalkeeper, who is third in the pecking order after Gurpreet Singh Sandhu and Amrinder Singh in Igor Stmiac’s India national team, could have done better dealing with the low shot.

Williams got his second of the night in the 44th minute. Rane produced a brilliant through ball and Williams did extremely well in beating the offside trap. Hyderabad FC defence was once again caught napping as the Australian again fooled Kamaljit by slotting the ball into the bottom right corner.