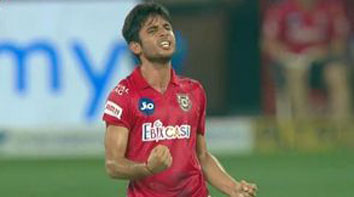 Ravi Bishnoi, Kings XI Punjab’s young spinner, said head coach Anil Kumble has advised him to always stay calm and back his skills as a bowler.

The 20-year-old Bishnoi snared three wickets in an emphatic 97-run win over Royal Challengers Bangalore in the Indian Premier League (IPL) on Thursday.

“Anil Sir has always asked me to back my strength. He has asked me not to try too many things and attempt to be cool and calm in the middle,” Bishnoi said at the post-match news conference.

The India U-19 World Cup player returned impressive figures of 3/32 in his four overs against a side that boasts of the likes of Virat Kohli and AB de Villiers.

He sounded confident about bowling against the top players.

“Since we had a long camp before the IPL, I was preparing myself mentally as the skill level is the same for everyone here. So being mentally strong was my main focus.

“I told myself not to bowl loose deliveries which would allow them to attack me,” said the leg-spinner.