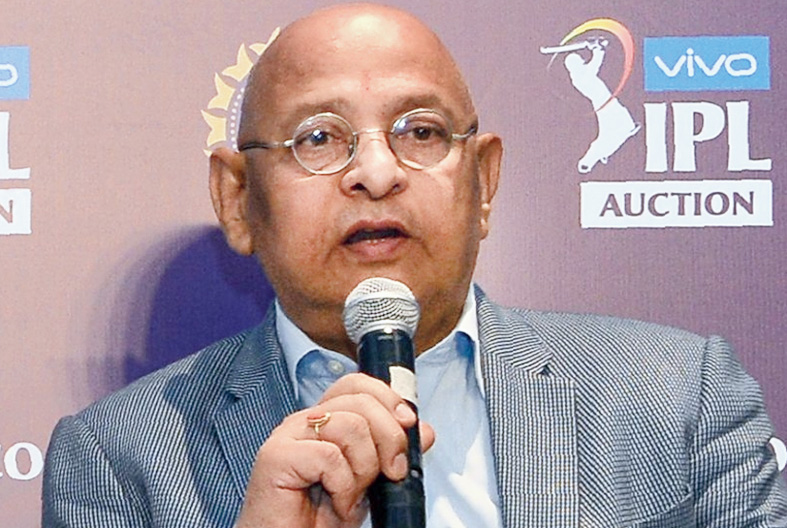 It’s an unusual way to extend New Year’s greetings, but these are unusual times for the Board of Control for Cricket in India and, so, acting secretary Amitabh Choudhary has greeted the Affiliates/Members with a record-breaking email running into thousands of words.

The email won’t please Vinod Rai, the Supreme Court-appointed Chief Administrator, and the Board CEO Rahul Johri one bit. But, then, they wouldn’t in any case have figured on Amitabh’s must-greet list for 2019.

Diana Edulji, the other Administrator, is no longer an ‘enemy’ as she has been on the warpath against Rai and Johri.

It has been so for almost three months.

The Committee of Administrators (CoA) got appointed by the Supreme Court as far back as two years ago.

Late on Tuesday, Amitabh’s email, which targets Rai, was made available to The Telegraph. Twelve “cases” have been listed, each under two heads — “Core facts” and “Explanation.”

Two “cases” relate to allegations of sexual harassment against Johri, who is Rai’s most trusted man in the Board.

Not that other employees aren’t in the race to please Rai, a retired bureaucrat.

“Though there have been umpteen examples of acts committed in violation of the Constitution, convention and processes, I am listing only a dozen examples for your perusal...” preceded the listing of the “cases.”

Amitabh ended his email, which (in winter) has to be gone through over cups of tea/coffee, as follows...

“It is crucial, therefore, in the immediate interest of the Board to protect it from complete destruction. It was my duty to provide with facts which may help such an effort by esteemed Members.”

1) The appointment of Priya Gupta as GM (marketing, communications and digital).

2) Appointment of the new Head of the ACU, ‘supposedly’ selected by the CoA.

3) The June 21, 2018 SGM of the Board which was convened on the directions of the acting president, but termed illegal by the chairman of the CoA.

4) Issue of Day-Night Tests and the acting secretary’s proposal to play one in the two-Test series against the West Indies.

5) The CoA issuing a direction that the CEO shall continue to sign all pleadings, affidavits, applications in respect of legal proceedings filed by or against the Board.

6) Ensuring that the affairs of the Board are carried out in terms of the newly-registered Constitution and the orders passed by the apex court.

7) Issue relating to the sexual harassment of a female employee of the Board at the hands of the CEO.

8) A show-cause notice being issued to the CEO and the subsequent decision to constitute a three-member ‘independent’ committee to inquire into allegations of sexual harassment.

9) Mid-season change in the Rules regarding eligibility criteria for being considered a local player.

10) On motivated leaks of the email written by Mithali Raj.

11) The acting secretary not being allowed to attend the Asian Cricket Council AGM in Lahore, on November 17, 2018.

12) Another leak in the Media, on an ad hoc committee being constituted for selecting the India women’s head coach.