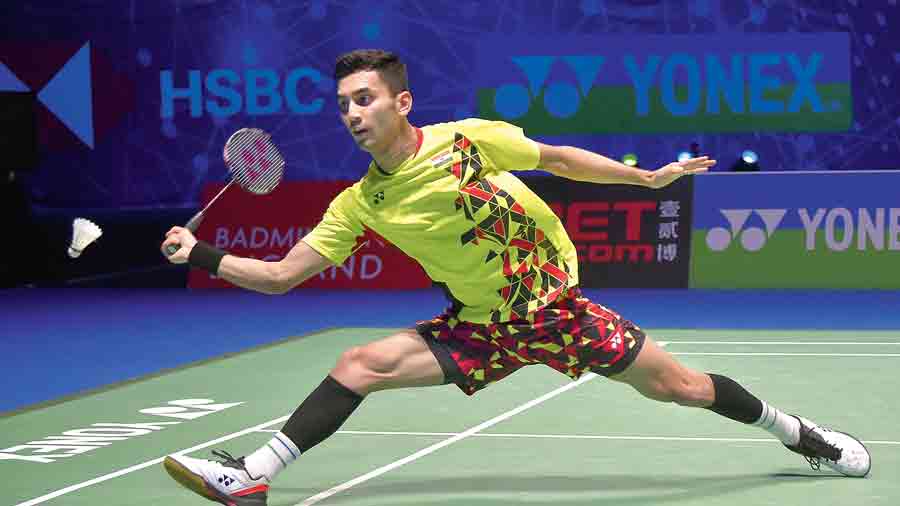 India’s Lakshya Sen in action against Denmark’s Viktor Axelsen during the men's singles final at the All England Championships on Sunday.
AP/PTI
The Telegraph   |   Published 21.03.22, 02:13 AM

Lakshya Sen’s dream run at the All England Championships did not have a fairy-tale finish as the Indian suffered a straight-game loss to world No.1 and Olympic champion Viktor Axelsen in the men’s singles final on Sunday.

Sen’s 10-21, 15-21 loss in Birmingham meant that India’s long wait for an All England champion got prolonged. Pullela Gopichand was the last Indian to have won it, way back in 2001.

The 20-year-old Sen, whose has had a fast rise in world badminton in the last few months, faltered on the cusp of history as he committed too many errors. The lop-sided final contest lasted 53 minutes.

A week back, Sen had recorded his first win over Axelsen en route to his final appearance at the German Open. Sen admitted that the Dane was too strong for him on Sunday.

“I think the strategy was there. I played him last week but today he was looking solid in attack and defence as well. He was really patient and played a really good game,” Sen said after the match.

“In the opening game, I committed a lot of errors that cost me the game. I was there in the second game, but again he was too solid for me to put the shuttle down.”

On Saturday, Sen had become only the fifth Indian after Prakash Nath (1947), Prakash Padukone (1980, 1981), Gopichand (2001) and Saina Nehwal (2015, women's singles) to reach the final of the prestigious tournament after outwitting defending champion Lee Zii Jia in a gruelling semifinal.

“There was a lot of pressure before the match, but when I was on court it was just another match for me. I played a really crucial match yesterday and that gave me confidence, but credit to him (Axelsen) for playing a perfect game.”

Sen couldn’t mount his attack and trailed early on with Axelsen galloping to a 6-0 lead with the help of some precise smashes on the lines. An aggressive return of serve helped Sen break the run of play but he couldn’t find openings as Axelsen kept the Indian away from the net, keeping him at the baseline with his returns.

A long 61-shot rally ended with Axelsen punishing Sen for his weak lift as the Dane grabbed a huge 11-2 lead at the mid game interval with a flick. A couple of unforced errors from Axelsen gave Sen two points and the Indian unleashed a cross-court smash to make it 5-13, a gap which proved too big to bridge as the Dane held 11 game-point opportunities with a smash.

Sen saved one before he sent the next wide to give a 1-0 lead to Axelsen. After the change of sides, Sen tried to engage his rival in energy-sapping rallies but he didn’t get the length right and allowed the Dane to take 4-2 lead.

Sen managed to reduce it to 5-6 but Axelsen used his height and reach to produce some powerful smashes to make it 8-4. The Dane continued to put the young Indian under pressure with his angles, length and precision to get to a decisive 11-5 advantage at the interval.

Sen couldn’t find a way to breach the defence of his fancied rival, who looked in complete control. Trailing 10-17, Sen tried to engage his rival in long rallies. The Indian won a 70-shot rally after Axelsen made a wrong judgement at baseline. However, it was soon eight match point opportunities for Axelsen with Sen going to the net.

The Indian saved three match points before sending the shuttle to the net as Axelsen celebrated.