Massive global military emissions often go unreported; that could change as the G7 meets to address the Ukraine war 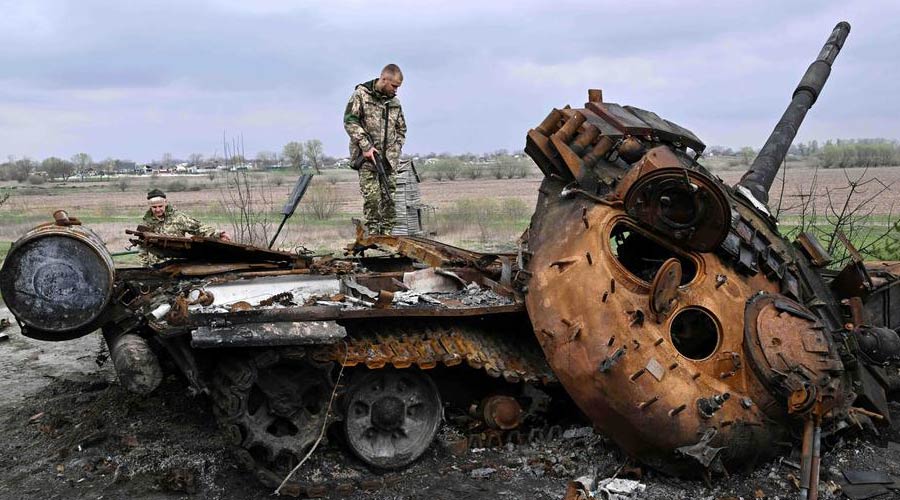 Direct conflict emissions are only part of the broad climate impacts of the war in Ukraine
Deutsche Welle
Deutsche Welle   |   Published 25.06.22, 05:01 PM

Massive global military emissions often go unreported. That could change as the G7 meets and addresses the impacts of a Ukrainian conflict fueled by Russian oil and gas.

While Russia's ongoing invasion of Ukraine has fueled widespread misery, death and destruction, less understood are the far-reaching impacts on the climate.

The billions of dollars' worth of weapons, jets, tanks and trucks that drive the grinding conflict contribute direct emissions that, amid the fog of battle, remain difficult to quantify — and which are not accounted for in the Paris target of limiting heating to 1.5 degrees Celsius (2.7 Fahrenheit).

But by sparking a global energy crisis, the Ukraine war also poses an indirect threat to global climate goals.

The conflict has exposed the world's dependence on oil and gas that also funds the Russian war machine. As Western nations scramble for alternatives, many are leaning toward even higher polluting energy sources.

Instead of making a quicker transition to renewables, the European Union, for example, plans to replace some Russian gas with fracked, high-emission 'freedom gas' from the US. Some fear a fossil fuel lock-in as countries like Germany look to reopen coal mines to deal with the energy crisis.

World leaders will have to finally deal with the climate impact of conflict as they head into the G7 summit in Germany on June 26, said Axel Michaelowa, senior founding partner of German-based climate consultancy, Perspectives Climate Group.

"The G7 is now struggling with the indirect energy-related impacts [of the war]," he said. "They make it more difficult for the G7 to reach the climate targets under the Paris agreement."

Michaelowa is the lead author of a report, released during last week's climate conference in Bonn, Germany, that highlights the need to better declare and account for military and conflict-related emissions.

It shows that military operation emissions in peacetime and war are only partially known, and that no one is taking responsibility for them in the context of the UN climate goals.

"Given that military emissions can reach hundreds of million tonnes of CO2 per year," nations need to "address more transparently" the direct and indirect climate impacts of war, said Michaelowa.

One suggestion is the inclusion of all military emissions in a greenhouse gas "global stocktake" due to be finalized at the COP28 climate conference in November. Another suggestion is for the United Nations Framework Convention on Climate Change that manages global climate targets to remotely monitor the "high intensity destruction of carbon reservoirs" during war such as fuel deposits, cities and forest fires.

Though militaries around the world have for decades been concerned that a growing climate crisis will be the key trigger of future conflict, they have done little to address their role in exacerbating global heating through fossil fuel burning.

The European Union, which collectively has the second-largest armed force, only reports some emissions due to national security concerns — indirect emissions generated by the production of military equipment and weapons, for example, are not included.

According to a 2021 report by The Conflict and Environment Observatory (CEOBS), a UK-based monitoring group, UK military emissions alone are at least three times higher than the 11 million tons of CO2 reported in 2018.

Meanwhile, annual emissions from the US military, the world's largest, are higher than Sweden or Denmark when properly counted, researchers have said. Emitting around 23.5 thousand kilotons of CO2 in 2017, the US war machine is itself estimated to be the single biggest institutional consumer of hydrocarbons on the planet.

But calls for transparency have been few.

The thousands of oil wells set ablaze during the 1991 Gulf War accounted for 2-3% of global emissions, according to one estimate. Yet countries have shown little interest in reining in such outsized military emissions.

More recently, that has started to change, with NATO urging member states to become climate neutral by 2050.

CEOBS released a report this week showing that regular and transparent reporting across all direct and indirect emissions will be vital for NATO's net-zero goal to be met — this includes "Scope 3" emissions such as postwar rebuilding.

The expected emissions from rebuilding cities destroyed in the Syrian war are equal to the annual greenhouse gas output of Switzerland, notes Michealowa.

The Ukraine war has solidified a growing awareness of military emissions.

"It's the first time the media have asked me about the climate impact of war," said Doug Weir, research and policy director at The Conflict and Environment Observatory, referring to the way the conflict has exposed "energy insecurity" and dependence on fossil fuels.

Weir noted that military budgets are also often focused on securing fossil fuel supplies, including in Libya where the decadelong conflict has slowed oil production to a trickle.

Between 2018 and 2021, Italy, Spain and Germany have spent more than €4 billion on missions that aim to preserve oil and gas supply, according to Greenpeace.

For Stuart Parkinson, a researcher at Scientists for Global Responsibility and a military emissions expert, any war spending is tied up with fossil fuels — including in Ukraine.

"Military spending is carbon intensive because of the fossil-fuel dependence of the military," he said, noting that Russia and Ukraine together accounted for around 3.5% of the $2.1 trillion global total military spend before the war, but that Ukraine has since been given $19 billion in military aid from the US alone.

A least eight NATO countries are planning to increase military budgets due to the war, with Germany announcing a €100 billion increase, said Parkinson.

"The increase in military spending will impact on the total military carbon footprint on top of the massive emissions from the war directly," he said.

While the notion of wars for oil are not new, climate change is adding another dimension to the link between militaries and fossil fuels.

If compulsory accounting of military emissions could threaten a country's ability to meet its climate targets, "this could have a deterrent effect on aggression," said Axel Michaelowa.

The logic goes that action to limit global heating to 1.5 degrees Celsius will demand a full energy transition through renewable sources, meaning there will be less money earned from fossil fuel exports that can be reinvested in large war machines — and conflict.

"If we have a world that is built on renewable, decentralized energy, there will be less funds for those who want to invade their neighbors," added Michaelowa.