The Galaxy A80 with its rotating camera module

This is the device for Generation Selfie 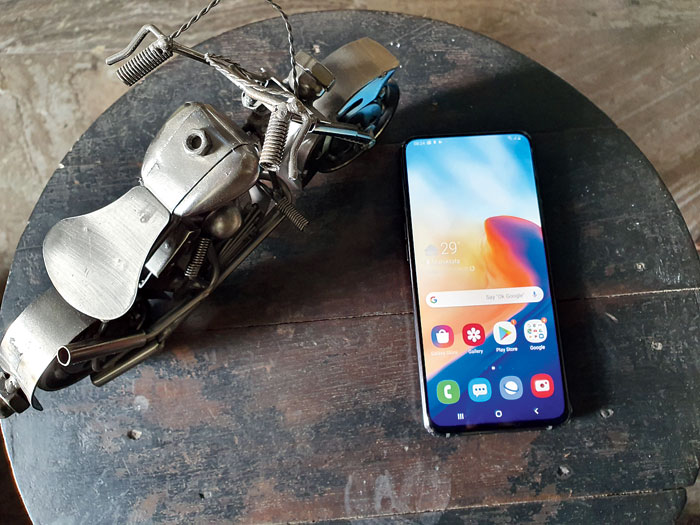 Since we keep demanding something “different”, most phone manufacturers have decided to go with pop-up cameras this year, which means thinner-to-almost-zero bezels, more screen real estate and a bigger battery, allowing a better viewing experience while watching movies over longer hours. Realme to Vivo to Oppo to Xiaomi have been there and done that. What next?

Samsung takes a slightly different path with its new Galaxy A80. On this, the camera more than just pops up… the camera module does a backflip on its axis, allowing users to use the 48MP(F2.0) + 8MP + TOF set-up. It is a complicated elevating mechanism but on the A80 one can match the quality of the front camera shots with that of the rear camera.

The Telegraph used the device for five days and here’s how it went.

Obviously our starting point would be the phone’s biggest feature — rotating triple camera. Who doesn’t like a selfie? And who hasn’t seen a person struggle to take a “perfect” selfie after striking a zillion poses. At times the nose looks crooked, the left side of the face looks better and so on. Basically, we are used to seeing ourselves in the mirror. Pamela Rutledge, director of the Media Psychology Research Center in the US, had said a few years ago: “We see ourselves in the mirror all the time — you brush your teeth, you shave, you put on make-up. Looking at yourself in the mirror becomes a firm impression. You have that familiarity. Familiarity breeds liking. You’ve established a preference for that look of your face.”

We prefer mirror images of ourselves. But the people around us, prefer the true image of ourselves. While taking a selfie, things get complex because of our proximity to the lenses. The parts of one’s face closer to the camera appear larger while none-selfie snaps have a more flattening effect on the face. How does one fix it? Better lighting, angles and more control over the camera. The last part is dealt with on the A80.

There is a good balance of contrasts and colours. Using a wide-angle camera for selfies allows easy group selfies. And the issue of barrel distortion in wide-angle photos has been tackled. With the TOF sensor, the distance between the subject and the background is identified better, making way for good bokeh effect. With the selfie mode on, one can also take a ‘live focus video’ and hyperlapse video, both of which are surprisingly good.

What about night photography? There is a “night mode” which can turn out a neat photograph taken using the main 48MP sensor by improving the dynamic range and sharpness. The only quibble lies in images taken at night using the wide-angle sensor where some details are lost.

And to the question of the sliding module. Is it safe? Will it break? Is it slow? The pop up mechanism comes up at the blink of an eye. We have tried sliding the module in and out time and again with zero fails. As for breaking, the phone did drop once from a height of a feet and a half. During the fall, the module retracted and there was no damage. And some of you may be worried about a mechanical whirring hum when the camera module goes up or down. Unless there is a gap of five centimeters or less between your ears and the phone, you would almost hear the sound of silence!

The Galaxy A80 is part of Samsung’s mid-range line but thrown into the works are some flagship features. In fact, at a glance, one may find it hard to tell the A80 from the flagship S series devices. There is a 6.7-inch FHD+ super AMOLED uninterrupted display with no hole punch or notch, a great glossy glass back and an in-display fingerprint reader. Weighing 220gm (slightly more than usual because of the motor that’s used to operate the rotating module), there is a piezoelectric speaker that vibrates the entire display to produce sound for all phone calls. We also like the built-in optical fingerprint scanner, which is pretty fast. But we wish the device was IP certified, which means protection from rain, spills and dust.

On the software part, the One UI keeps us happy. Based on Android Pie 9, navigation around the system is fluid. There is also Bixby and Samsung Pay. The A80 supports 25W super fast charging, making the 3,700mAh battery go from zero to 100 in around 75 minutes.

If we accept that pricing is a subjective issue, the Galaxy A80 has given Samsung a chance to experiment while delivering smooth performance. The phone being on the “flagship” end of the A series, it offers something very different from its competition. With its rotating camera module, the Galaxy A80 is simply a fun device for Generation Selfie.