It looks like Apple AirPods but that’s where similarities end 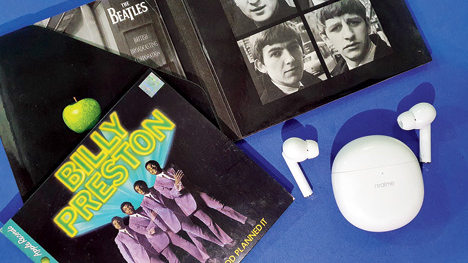 There have been two big achievements for Realme in the past few months. First, the brand recall value now matches that of Redmi. Second, the bouquet of offering is so vast that one can consider having a phone, wireless buds, security camera and even a toothbrush from the same brand. Good specs at good pricing.

Besides some of the phones in the last few months, we have had the opportunity to review the company’s Buds Air Pro. Instead of considering it another boat in the ocean of truly wireless stereo solutions, it’s best to focus on some of the features that are knockout.

It looks like Apple AirPods but that’s where similarities end. Most iPhone users will buy only AirPods. It’s in a category of its own. The Android segment is where most devices are and where competition resides. Without taking too long over the looks of the charging case — all you need to know is that it’s sleek and solid — let’s focus on the Buds Air Pro. The stems are on the longish side because that’s where the tech resides but they are not uncomfortable. There are a few silicone eartips in the box to offer you a good seal.
In case you are already using Realme phones, you already have the apps necessary, otherwise just install Realme Link on your phone — any phone. This is the hub of all the accessories coming from Realme. To pair the earpods, simply open the case and hold down the button on the side for three seconds to pair.
Let’s dive into the noise control options. There are three modes — noise cancellation, general and transparency. Noise cancellation is supposed to cut out all environmental sounds. It does cut out most of the sound but I could still hear the gentle purring of an air purifier but not enough to be a bother. Besides, there is very little of that feeling of being in a vacuum, which one finds in most earbuds. In transparency mode, one should be able to hear most of the environmental sounds without killing the music. The mode works fine.

The album that came up first during the review is Al Green’s album, Have A Good Time. All the big notes of Keep Me Cryin’ sounded astonishing with good separation between vocals and instruments. It sounded like a big lively stage. Things remained on course with Something until the low notes started flowing in; there was something amiss. By the time we reached Have A Good Time, the drum roll introducing the track appeared muddled. The feeling didn’t change much on something like Hot 8 Brass Band’s version of Sexual Healing; something was holding back the sound. Kacey Musgraves came to the rescue with her golden voice on Golden Hour. In way of bass, nothing much to complain; in case you want more of it, turn on the Bass Boost+ option in the app.

Call quality on the Buds Air Pro fared well. Even in somewhat crowded places, the person at the other end didn’t have problems hearing me while gaming and streaming experience is up to scratch.

What I like most about these tin cans is the ability to programme the tap features. Double-tap function for you can be different from that on my pair of earbuds. Also, take off one of the earbuds, the music pauses and putting the buds back in the ear, resumes streaming. In case you want to keep only one bud on, that’s possible.

Getting around four and a half hours out of these tin cans with ANC on and at around 60 per cent volume is quite good (plus, you get almost a day by charging in the case). Personally, I am a Sennheiser user because it’s a company that’s invested in the business of sound. But consider the reasons behind buying something that costs around Rs 5,000. More than decent sound quality, good call quality and great build quality. Corny as it may sound, I got to spend some quality time with this Realme offering. Alternatives include OnePlus Buds and Oppo Enco W51. What Buds Air Pro offer is bang for the buck.