With a good battery life this smartwatch offers good value 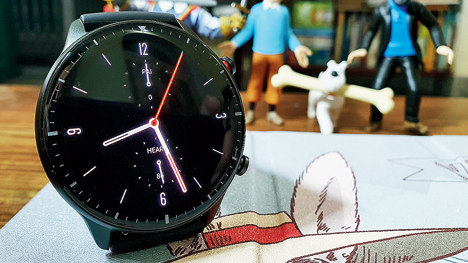 Amazfit GTR2 easily lasts 11-12 days on a single charge while offering enough health-related data at your command.
The Telegraph
Mathures Paul   |   Published 06.01.21, 01:54 AM

It will be an important year for smartwatches. Usually we promise to eat better and focus on health at the start of a new year, only to cave into temptations. Being confined to four walls, many have already made fitness a priority in the last few months. Now it will be about continuing with what we have started, which is where smartwatches come in.

Agreed that Apple has a few (distant) competitors in the segment but a couple of names are making the right moves while we focus on the next lap around the sun. One such brand is Amazfit, which has been constantly pushing out smartwatches that are easy on the pocket and at the same time goes tough on maintaining quality.

The latest from Amazfit is the GTR2, which brings simplicity to smartwatches in way of design, yet it’s chock-a-block with functions. What you get is a biggish edge-to-edge AMOLED display — 1.39-inch to be exact – that, at a glance, looks like a traditional piece. The round bezel has been well used to highlight the display as well as offer clear readings; the minutes are marked out clearly. There are two buttons on the right side, one for delving into the functions while the other is for workouts.

Being an AMOLED screen, everything is crystal clear under the sun while the colours are rich, giving a premium feel. Also, the watch is sleek enough to accommodate a wide range of wardrobe choices.
But it’s possible to split hairs on the design front. First, the silicone strap is comfortable on the wrist but I have a problem with wearing something rubbery throughout the day, especially with summer around the corner. Second, the watch face is a tad big on a narrow wrist.

Quibbles aside, the uncomplicated design betrays the level of smart functions on the GTR2.

Some of the big-hitting deliverables from Samsung and Apple are here. In fact, 2021 will be the year when things like SpO2, or oxygen saturation readings, will become commonplace on smartwatches; it is no longer restricted to expensive devices. The question is how well does the GTR2 does it and how quickly.
Like on the Apple Watch, the GTR2 has to be worn snugly around the wrist to get a SpO2 reading. Once activated, it takes a few seconds more than what the Apple Watch takes. The readings are comparable to the big brands, yet, what exactly does one do with the figures on offer? Fine, my reading is between 97 and 100 per cent but it all comes down to marketing versus medicine on this front. Slightest bit of movement, and one cannot be sure if the readings on a smartwatch are correct, be it Apple or Samsung or Amazfit. Instead of considering smartwatches as medical devices, think of them as something that simply points you in the right direction on the health front.

The heartbeat sensor is what impresses more on the GTR2. Also, the GPS function has been greatly improved. What Amazfit has done with the PAI (Personal Activity Intelligence) function is impressive. The feature covers any form of exercise and personalizes the health assessment system for each user depending on their health data. There is a certain amount of gamification involved, motivating users to improve their health quotient.

The 12 built-in sports modes cover pretty much everything we do — outdoor running to swimming to climbing to cycling and treadmill. In fact, this is where the GTR2 scores over Realme Watch S, which has a certain level of water resistance but ironically there is no swimming mode on it; one has to opt for the Pro model to get the feature.

The sleep tracking feature is also efficient; it gathers a lot of data while one sleeps. Personally, I feel uncomfortable wearing a watch to bed but if push comes to shove, GTR2 is fine because of how light the watch is and the strap is not very uncomfortable.

There are a few more interesting features — the ability to load some of your favourite tracks and microphone. On 3GB, expect to store around 400-500 songs while the speaker is loud enough for a small device. But would you sit on the park bench with your wrist glued to the ears, listening to Penny Lane or Genda Phool?! Yes, you can receive calls on the phone but would you like to do it?

On the other hand, the microphone is a good addition. There is an “offline audio command” mode, which basically means activating certain things with your voice, like brightness level, workout modes, music app and so on. It works very well once you find the option to turn it on! I felt lost for five minutes until I found the option deep embedded in the system preference menu. Amazfit needs to work on easy access of features on its device.

The same goes for the barometric altimeter, which is hidden under widgets. The feature may come in handy if you are going on hikes. There is also a compass, once again under widgets.

The recently-launched Realme Watch S (left) is water resistant but to access something like swimming mode, one has to opt for the Pro model while Amazfit GTR2 has the mode in-built.
The Telegraph

Runs on and on

Amazfit says that GTR2 runs for 14 days on a single charge. Here’s the deal: I like to keep the brightness level up and also turn on a few extra battery-draining features, which brought down battery life to around 11-12 days. And that’s not bad at all. Having to recharge a smartwatch every 11-12 days is amazing considering that the latest Apple Watch lasts a day or slightly more. The GTR2 does slightly better than Realme’s latest or the Mi Watch Revolve in the battery department.
Is it for you?

The Zepp app, which runs the watch, has a lot of data to offer users while the GTR2 has enough features to qualify as a smartwatch (unlike a few brands in the market). Agreed that the size of the watch could be slightly awkward for a person with small hands but that shouldn’t deter you from trying it out. Clean looks, enough bells and whistles and good battery life make the Amazfit GTR2 (Rs 12,999) a smartwatch that offers good value.