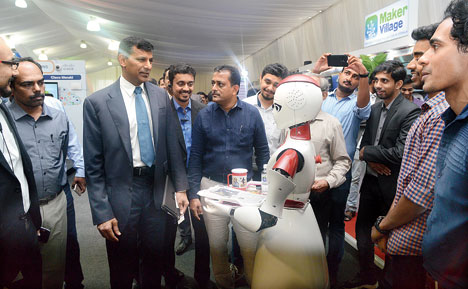 An invitation had arrived in the t2oS inbox to attend Maker Village in Kochi in late March. Village? Well, what greeted us was a massive building at Kinfra Hi-Tech Park. “A number of wonderful pitches get made every year. You will be surprised to know that recently we had an excellent idea (about containing forest fires) pitched by a Class IX student but we couldn’t accommodate him because he needs to finish school,” Maker Village CEO Prasad Balakrishnan Nair told us.

Three start-ups hooked us: Waferchips Techno Solutions, Resnova Technologies and PerfectFit Systems. Away from the Village and at #FUTURE, one more start-up won us over — Watasale.

The story: “I’ve come across several incidents involving young athletes collapsing, people dying in their sleep and so on. The reason: Cardiac arrest. The percentage of people affected by cardiovascular diseases is increasing; even fitness enthusiasts suffer from cardiac ailments. And most of them are unaware that they have those problems. Our solution: Biocalculus, a wearable ECG device, which is affordable and can record details continuously,” says Sonia Mohandas, the 29-year-old founder and CEO of Waferchips Techno Solutions.

“The device is wireless, small (7.4x2x1 cm), lightweight (20g) and ultra-low powered. This translates into user convenience. The ECG, heart rate and heart rate variability, activities can all be viewed using an app on smartphones. It can be very helpful for people in rural areas where few doctors are around.”

Scope in real life: “We have started testing a few devices in some of the  hospitals in Kerala and are collecting samples from patients with different cardiac diseases. While we are in the final stages of tuning our devices, we are looking for angel funding to scale up. By June we should be able to hit the market. In the pre-order stage, the device costs Rs 6,000,” says Sonia, a postgraduate in electrical and electronics engineering, who was assistant professor in Sree Narayana Institute of Technology for four years before starting Waferchips.

The story: “I have been working on 3D scanning solutions for over four years in various domains and saw a potential for 3D body scanning systems during my brother’s wedding when he was going through selecting and ordering his wedding wear. The 3D body scanning systems use various illumination patterns to detect measurements of the different parts of one’s body. The system does not capture photographic images, making the system both fast and light. Temporal scan of the user on a periodic basis is used to compare measurement changes of various parts of the body. All this is done in a fraction of the time of conventional production techniques,” says Eobin George, director, PerfectFit Systems.

Scope in real life: “We are planning to launch early next year. Scaling up for the first few months might be a challenge but infrastructure that we have developed will help us scale up internationally in the first two-three years. Some top brands are interested in our solutions,” says Eobin, who holds a Bachelor of Technology from Model Engineering College and had started his career with Aerotec, building and testing drones for agriculture and aerial surveying.

The story: “Watasale is an unmanned retail store that’s open 24x7. It’s simple: Walk in with your phone, pick your product and walk out… payment gets done automatically. There are no queues, no scanning and no cash or cashier involved. Watasale stores will carry a variety of products, ranging from chocolates to ice cream, fresh fruits and vegetables, soft drinks, milk, diapers, ready-to-eat food, toiletries, cleaning products and most other daily items you find at your local grocery store.

“The problem we were trying to solve is the inconvenience customers face when they don’t have access to stores at odd hours. Didn’t you have that problem when you ran out of milk at night or couldn’t get a sandwich after your night shift?! Another issue was the time wasted at stores dealing with unhappy/disgruntled staff and the never-ending queue at cash counters to make purchases and payments. The fact that there are other large players, like Amazon and Alibaba, thinking of comparable concepts only reinforced our belief that our product is a viable and innovative solution. We have been working on this solution for the past few years, perfecting the technology,” says Shanoop Sivadas, CTO, Watasale, Inc.

Different from Amazon Go: “In Amazon Go, as far as we know, customers can see their virtual cart or receipt only after leaving the store. In India credit cards and auto debit transactions are not very popular. So we designed our application in such a way that the customer can see the items in their virtual cart in real time. We charge the customer before leaving the store.”

Scope in real life: “Watasale plans to open several stores in various markets, small grocery store or hypermarkets. We intend to launch in the next few months.”

The story: “We started working on Dairy Management System (DMS) 10-odd months ago after listening to a request from my cousin brother, who runs a dairy farm. On his farm many members of his herd of cows were battling diseases and some had died from mastitis. Our device can identify mastitis at an early phase with considerable accuracy. It can also notify farmers unusual patterns related to other diseases and injuries. As of now our main focus is on cows, in the future we can also expand to other sectors,” says Jijo Paul, CEO, Resnova Technologies. The 2014-founded company has prior experience in developing technology solutions in the fields of IoT and Agri-tech.

Scope in real life: “We have been testing the product for four months at various farms and we have been carrying out a wide variety of tests in terms of detection, communication and reliability. The product is set to launch in June. The basic product will cost around Rs 20,000 and the complete solution, around Rs 40,000,” says the 27-year-old who did his Masters in electrical engineering from Rajagiri School of Engineering.