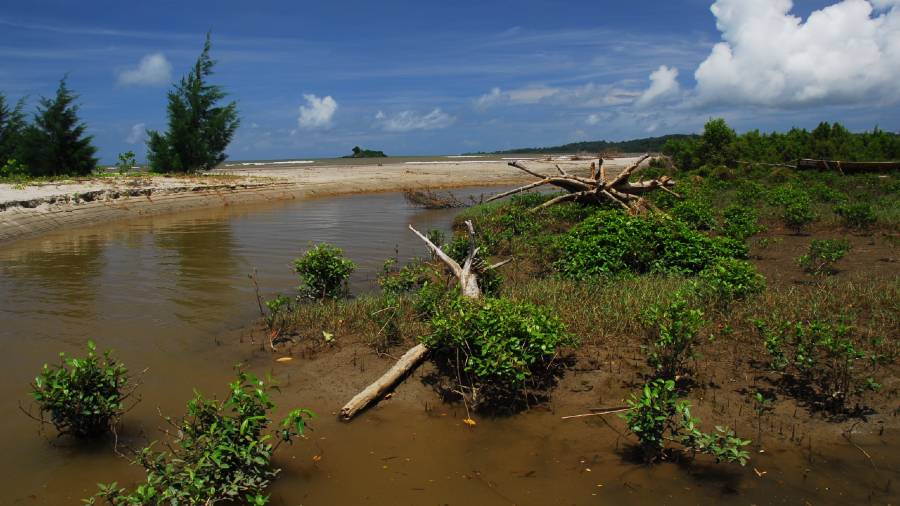 A lazy, apparently eventless post-Christmas morning on the sun-kissed beaches of North Andaman in 2004 had little anticipation of the massive earthquake measuring 9 on the Richter scale (Mw>9.2) occurring near Aceh, Sumatra. (Mw stands for the moment magnitude scale.) The earthquake displaced the seafloor vertically by 10-20 metres.

Geologists term an earthquake of such high magnitude a megathrust earthquake. It pushed a large volume of seawater and caused a disastrous tsunami. A tsunami of such amplitude had not been experienced in the Indian Ocean in recent times. And that is why the tsunami in 2004 came as a complete surprise to coastal communities and geoscientists worldwide.

The tsunami struck 11 countries from east Africa to South Asia and claimed over 2,00,000 human lives. The immediate question that came to mind was — did such a megathrust earthquake happen for the first time in the Indian Ocean?

A team of researchers from the geology department of Calcutta’s Presidency University, including myself, studied a rare occurrence of peat in North Andaman Island.

The tremor of the 2004 earthquake had woken up the people of Kishorinagar, a small village in the northwestern part of North Andaman Island. The villagers discovered that a portion of the beach — locally known as the bank of Talbagan — had risen up above the sea. The megathrust earthquake had lifted the northwestern part of North Andaman Island about 1.3 metre above sea level. This in turn exposed a three centimetre thick, soft, dark grey coloured peat layer embedded within the beach sand in Talbagan.

Radiocarbon dating revealed that the peat had been buried in the sand for the past 200 years.

Peat is the precursor of coal. It is formed from partially decomposed compacted remains of vegetal matter and carries the imprint of the geological events responsible for its formation. Chemical and geological analyses of peat fragments are often used to decipher the type of plant and the process that led to the formation of peat.

Stable isotope geochemistry of the peat indicated that the peat layer was formed from locally abundant coastal mangrove vegetation. However, such an occurrence of a peat layer embedded in beach sand is enigmatic because beach sand is unlikely to support vegetation large enough to form a peat bed several centimetres thick.

We, the researchers from Presidency, in collaboration with Japan’s Shinshu University, worked out that the peat was formed due to catastrophic mass mortality of mangrove vegetation that thrived along the vast stretches of North Andaman Island about 200 years ago.

An earthquake of a magnitude similar to the 2004 quake had lifted vast stretches of the ground in North Andaman Island that supported dense forests of mangroves and associated intertidal vegetation. The plants were elevated beyond tidal reach and cut off from the supply of tidal water. They eventually perished due to desiccation and a gradual decrease in soil salinity.

Tides transported the dead tree trunks and branches to the open sea. The sea waves pushed the plant debris to the high tide line, where the hardwood material accumulated over the years.

Eventually, all this was buried under the sand when the lifted ground went under following a cyclic post-earthquake geological process. The plant debris remained preserved as a discrete peat layer within the sands.

The research, published in Catena, an interdisciplinary journal on landscape evolution, explains all this. It provides a scientific explanation of the occurrence of the stringers of peat bodies buried at shallow depths within the unconsolidated beach sands of Talbagan.

A similar ground uplift occurred in North Andaman Island after the 2004 megathrust earthquake.

Geological field observations made between 2005 and 2015, and satellite images captured between 2004 and 2019 provided a clear picture of the processes of massive mass mortality of the mangrove vegetation in the elevated parts and the ongoing process of peat formation from the dead vegetation. The cyclic process of downward movement of the landmass has been detected approximately three years after the earthquake. The partially decomposed mangrove remains would eventually be buried in the sea and preserved as a peat layer until the next megathrust earthquake brings it up to tell the narrative of the 2004 catastrophe to future scientists.

The mangrove-derived peat occurrence in the North Andaman Island has significance beyond its role as a geological record of past catastrophic events.

Over 50 per cent of mangrove vegetation in the Andaman Islands was destroyed following the 2004 megathrust earthquake and Indian Ocean tsunami. However, the mangroves acted as an effective barrier against the tsunami and protected the coastal villages from the massive tsunami waves. The good news is that the mangrove forests show evidence of fast regeneration.