Folding phones will help us take full advantage of 5G 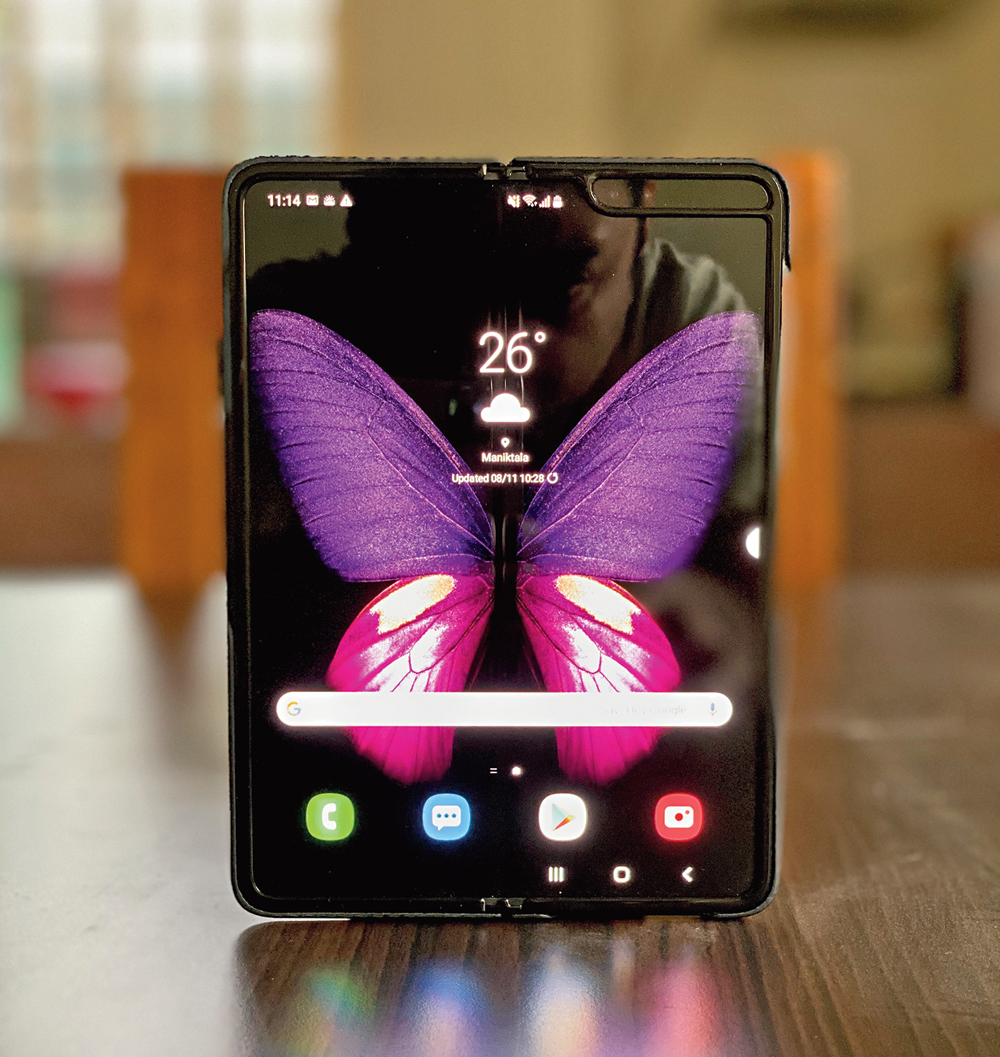 Back in the 1980s, the thrill of seeing an artist’s impression of future cars was unparalleled. Then there were those photographs of flamboyant prototypes in foreign magazines that landed on the table once or twice a year. The gawking kid grew up but retained the zeal as cars continued to compete in terms of style, features and, of course, ergonomics.

This is much like phones. Feature phones of the 1990s and the first few years of 2000s tried all kinds of shapes and sizes to offer the ideal user experience. Then arrived the iPhone in 2007 to write a new chapter for the industry. What next? Can the rectangular slab be reshaped? Where is the badass future we were promised? Enter Samsung Galaxy Fold.

Folding phones, we are constantly told, is the future because it has all the components that can take full advantage of 5G when it arrives. So when the review copy of the Fold arrived a few days ago, the question we asked was where does the Fold fit in today? Let’s find out.

The design is a conversation starter

Before getting into details, here’s how the first afternoon with the Fold in a public space unfolded. Dads enjoy a moveable feast of words when they turn up to collect their kids from school. Having turned up a few minutes before schedule, I casually took out the phone to catch up on news. The sun was shining in all its glory, beating down on the phone while the fingers kept swiping up and down. Suddenly one felt that in hand was a book — just the perfect size, both thumbs helping with the scrolling process. When the embedded videos in the news articles played out, there was enough clarity to keep one glued to the screen, even though the sun was at its peak.

A few minutes later, a few dads joined in. The conversation straightaway moved to the obvious.

Bank manager dad: Is that a mini tablet?

Architect/real estate dad: Neat design. There is enough screen estate. Does it support a pen? (No, not yet!)

The buzz around flexible display technology seems to be getting buzz-ier since the Fold was announced for the Indian market. There is a lot it can offer in way of marketing and research. Let’s begin with the main 7.3-inch dynamic AMOLED display. Unfolded, the default background picture is that of the butterfly, which we have seen so many times since the phone was announced several months ago. The main screen is made with a new and advanced polymer material layer, which somewhat tucks under the frame, ensuring nothing peels off. A special case for the phone has been included in the box, which we recommend you to use.

Since the phone folds like a book, one wonders if there is a crease running down the centre. Yes, a light crease is visible as soon as the phone is unfolded. But after using the phone for a few minutes, one forgets about it and it’s not a distraction while reading or watching videos.

The next big concern may come in the form of the Notch at the top right of the screen, which is home to a couple of cameras. How much of a hindrance is it to reading or streaming? While reading, almost zilch. While streaming, if required, visit the settings menu to hide the entire top bar of the phone. It works well even if it translates into losing a bit of the screen real estate.

Arriving at the big question: Does the screen deliver a good viewing experience? In one word — it’s a ‘delight’. One gets the desktop feel while using Gmail, the Kindle app works as brilliantly as on the Kindle (with better touchscreen functionality) while the browser… it’s a relief to open several tabs on the Samsung browser, like one would on a laptop. 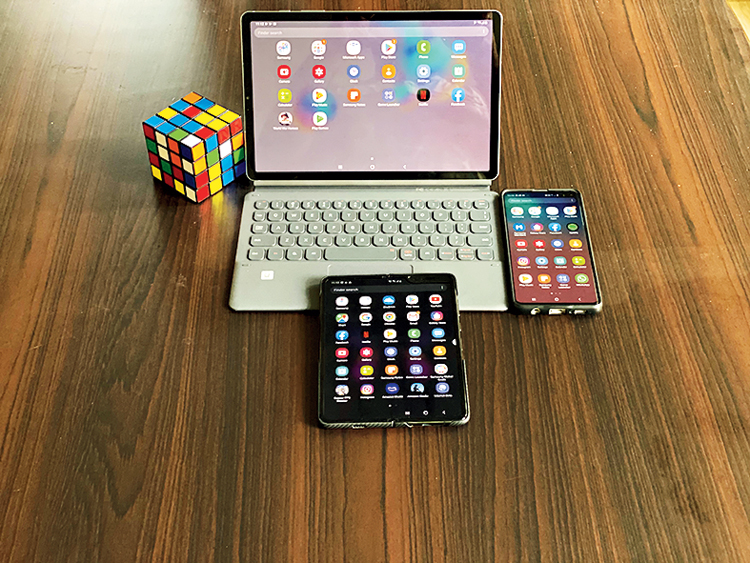 The Galaxy Fold takes the best of the tablet and the smartphone
Picture: The Telegraph
The secondary screen

When folded shut — and that takes place with a pleasing snap — there is a secondary 4.6-inch super AMOLED screen on the front. Unlike the primary screen, it doesn’t fill up the front of the phone, leaving bezels on the top and bottom. But the idea of the second screen is not to watch videos — which you can, of course! — but to make calls, send messages or read notes on the go. Agreed that the keyboard which pops up on the secondary screen is small but that doesn’t get in the way of keying in a quick email or message. Since the standard Samsung UI is used, there is zero unfamiliarity. What the company should look at in future versions of the device is slimness when folded shut and also a lighter set of batteries (yes, there are two on this phone; more on that later).

Samsung has worked closely with Google, something that’s quite visible. I could start a YouTube video about making a piggy bank for a school project on the secondary screen and then seamlessly move to a full screen view by unfolding the device. The same goes for searching on a map, which is particularly helpful. But one may ask why should anyone start on a small screen and then move to a bigger canvas. Fold has the functionality of a tablet and that’s where things get innovative. One can concurrently work on three resizable windows on the big canvas and there is no need to switch between windows. Here’s an example. While working on articles on the go, the three things I need are iA Writer (it’s like a notepad), the browser and messaging app. With the Fold, all three windows can be kept open together and they are all active simultaneously. The multitasking factor also helps someone who carries multiple devices during travel. With the Fold in the pocket, one doesn’t need to carry, say, a Kindle and a tablet. Stream your favourite show on the big screen and read the latest thriller without screen-related issues. Samsung had promised a smartphone and a tablet. And Fold is just that.

Since the device runs a Fold-optimised OS, most apps run smoothly but yes, things like Instagram Story need to be worked on further. The other quibble would be the home button on the primary screen. It’s on the bottom part of the right panel. For those who use Android phones, it’s a natural instinct to move the thumb to the middle of the screen (and not to the side) for the home button. As for the fingerprint scanner, it’s on the side (below the power button), which means there are occasions when one mistakes one for the other. Having said that, the side fingerprint scanner is one of the best we have seen; it works effortlessly.

There are six cameras and that pushes up the price. When the phone is shut, the 10MP selfie (cover) camera is what you need while on the back is a triple lens (12MP+16MP+12MP) set-up of wide, ultrawide and telephoto lens. Finally, dual 10MP+8MP cameras face you when the phone is unfolded. Like on the Galaxy S10+ or Note10+, the cameras are as inviting as ever, complete with a scene optimiser. The pictures come out colour-perfect with all the details expected of a flagship device. It even supports 4K UHD and HDR10+ video capture. No complains. What’s different this time is how you take photos. With the screen shut, go ahead and take a photo like you would but unfolded, the viewscreen is amazing.

In way of power, again it’s all top of the line as the company has put in an octa-core processor, 12GB RAM and 512GB storage space, which should hold you in good stead. What impresses the most is battery life. With dual battery, users are guaranteed enough juice to last more than a day (like a tablet!), even with the screen brightness amped up. There is wireless charging as well as wireless power sharing. Though the headphone jack is missing, there is a great set of Samsung Galaxy Buds in the box while the two speakers (on each side of the left panel) sound great and loud.

Yes, the Fold is expensive but so were the first smartphones. Yes, there are a few quibbles but so is the case with any new technology. Samsung has taken a bold step to come up with an innovation that reignites interest in smartphones. While most manufacturers are still debating what makes an ideal Notch, the South Korean company is busy with a dramatic reimagining of the future of mobile devices, offering glimpses of the potential of the flexible display.