An animal that looked like the Loch Ness Monster swam the oceans millions of years ago. Nicholas St. Fleur explains just how they propelled themselves though the water 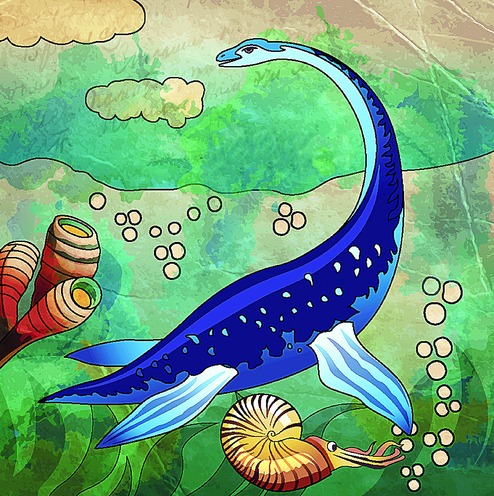 Millions of years ago, when dinosaurs dominated the land, leviathans known as plesiosaurs prowled the oceans. With their long necks and barreled bodies, these marine reptiles - which were not dinosaurs - resembled the mythical Loch Ness Monster.

Though not every plesiosaur had a neck like "Nessie," they all had four long flippers. Since the first fossils of this prehistoric sea creature were found about two centuries ago, the two nearly identical pairs of aquatic limbs have puzzled paleontologists.

"Having four big flippers like that is rather strange," said Luke Muscutt, a biomechanist and postdoctoral researcher at the University of Southampton in England. Muscutt spent his thesis decoding how the plesiosaur paddled, which he said is unlike any other living vertebrate that swims in the ocean. Fish and sharks swim by swinging their tails side to side, and whales and dolphins swing theirs up and down. Even other animals with flippers like sea lions and sea turtles do not swim with all four flippers, he said.

A study he published August 30 in the journal Proceedings of the Royal Society B provides further evidence that the hind flippers were key to the plesiosaur's underwater moves, and were not just limbs used for steering.

"Plesiosaurs definitely used all four flippers for propulsion and that made them more efficient and effective swimmers," said Muscutt. The findings, he said, could help settle the long-running debate on how the plesiosaur swam. They could also contribute to future designs for underwater drones or submersibles.

Muscutt used a 3-D printer to create two faux flippers to represent one side of a plesiosaur and attached them to a mechanical device that aimed to mimic how the creature moved. He crafted the foot-long robotic flippers using photographs of plesiosaur fossil specimens as well as from geometric data collected from today's flippered-creatures like penguins, turtles and sea lions.

He put the flippers into a large water tank, and using different coloured dyes, ran several simulations to determine under what conditions the flippers acted most efficiently. The system performed best when the front and back flippers both flapped.

"There's no other animal apart from a dragonfly which utilizes its own wake in this way," said Muscutt.