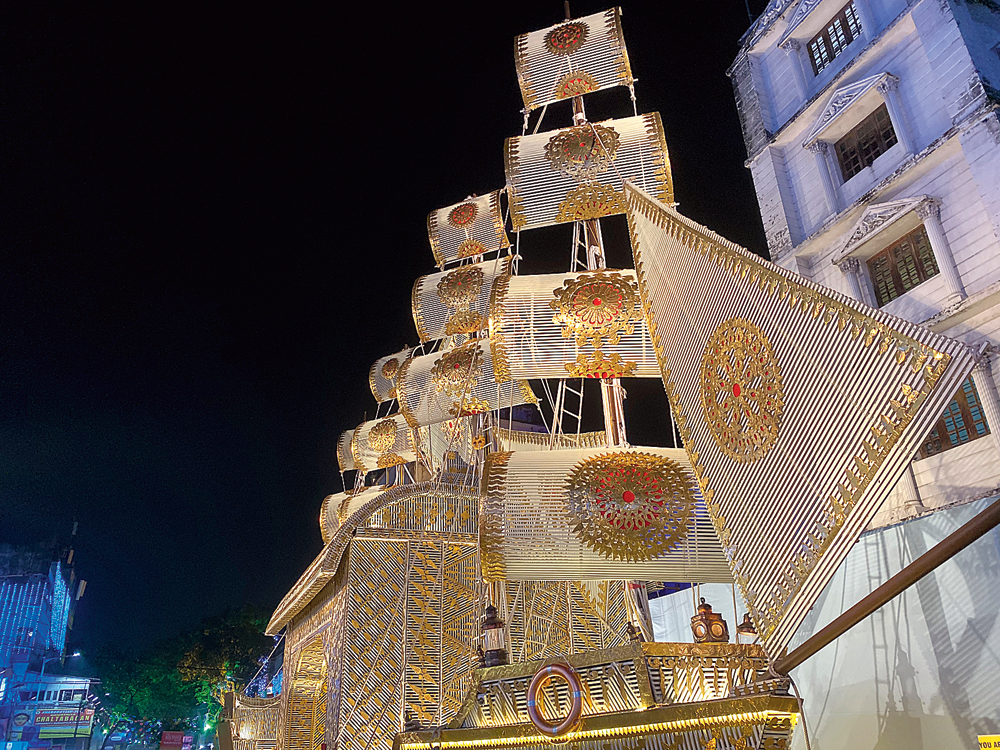 By now you have probably read a gazillion jokes about how a kidney or two needs to be sold to buy an iPhone. The joke has become stale. Expensive, yes it is if the iPhone 11 Pro or Pro Max is in the pocket. Head-turner, absolutely it is each and every time it leaves the pocket. Benchmark-setter, without fail other brands will fall in line. We are not talking about price, as it is a subjective issue. We are talking about experience.

After using the iPhone 11 Pro for 10 days, right through Durga Puja, one realises how blatantly other brands use the term “Pro”. Pro stands for something that’s advanced, which the iPhone 11 Pro and the larger Pro Max are — aspirational and productive.

The most distinguishing feature of the new phone is the three-lens camera on the back, which are clustered in a stamp-like shape. More important than the shape (yes, we are aware of the concerns of people suffering from trypophobia!) is what the camera can do. If point-and-shoot is your technique, you will be guaranteed impressive shots. But to do more, there’s a learning curve, which keeps changing, thanks to software updates. The iPhone 11 Pro has the two lenses of the iPhone 11 — a wide angle and ultra-wide angle lens (with a 120-degree field of view), both use 12MP sensors. Plus, a telephoto lens. The wide-angle lens has an f/1.8 aperture, the ultra-wide has a f/2.4 aperture, and the telephoto has an f/2.0 aperture.

Most of the magazine-worthy snaps we come across broadly fall under three categories — wide photos, which set the scene; tight shots to highlight details; and a middle shot that takes storytelling forward. Moving from one lens to another on the 11 Pro is straightforward.

The main camera is the standard wide angle, which now offers improved performance in low natural light. Even though the maximum ISO (the camera’s perceived sensitivity to light) has been increased, the sensor’s low-light capabilities and software combine to ensure there is no increase in unpleasant noise in the photos.

The telephoto lens has improved drastically since the iPhone 7 Plus, which first had a Portrait mode. It offers an angle of view that one expects out of a 52mm lens on a full-frame DSLR. Apple has improved the focusing speed, making it better than any brand out there, without compromising the quality of natural background blurs. Try taking photos of raindrops on plants: the bright details are mesmerising, with little or no lens flare.

The iPhone 11 Pro
The Telegraph

Finally, the ultra-wide lens, the new addition to the iPhone camera. This is the mode that has been missing from the iPhone. The 4x optical zoom is amazing. In simple words, the telephoto lens allows one to zoom into a shot while the wide-angle lens allows you to zoom out. With 2x zoom in and out, the iPhone 11 Pro achieves a 4x optical zoom. You can stand in one place and take the same photo with three different zoom options. And the three snaps will look like they were taken at drastically different distances. The improvements in contrast and colour are significantly higher than what’s found on the iPhone X.

A drawback: My finger tends to get in the way in some wide-angle shots. One has to work around the problem by holding the top and bottom instead of the sides of the phone.

Probably the most exciting new feature for amateur photogs, Night mode comes on automatically in low-light situations, prompting you to hold a shot for one, two or three seconds. The longer the exposure, more light goes through the lens. The auto feature is more helpful than going through settings to find a dedicated Night mode. Combined with the image signal processing on the phone’s A13 Bionic chip, low-light snaps come out excellent. It has matched and outdone Google Pixel 3, which so far has been the champion in night photography (of course, let’s see what Pixel 4 has to offer on October 15).

In dimly-lit restaurants, where the light is relatively flat, the iPhone camera captures a lot of details while colour and temperature are spot on. When it comes to skin tones, Apple has done its homework by taking into account weddings and events and the subjects certainly don’t appear cartoonish.

One area Apple does need to work on is mixed-light conditions. When the Night mode is on, the light sources are sometimes amplified to the point that one may not understand if a photo was taken at night. This will probably improve in the coming days. Another quibble: Night mode is capable of capture times up to 30 seconds but this can be used only if the iPhone is on a tripod or something steady. Why not allow the same in all circumstances? At times, mess can be artistic!

A software feature that’s really striking involves the viewfinder. When taking an ultra-wide shot, the view fills up the entire screen. When switching between lenses, two translucent patches appear on the sides, showing what you are leaving out. This helps compose a shot better.

An attention-grabber of a feature is the slow-motion selfies or Slofies. Vloggers, influencers and children will be mesmerised for weeks (not months!) by this front-camera feature, just like Animojis did in the past. Complementing Slofies of the front camera is a feature on the rear mechanism — High-Key Light Mono setting on the Potrait mode. It takes the Stage Light Mono mode and swaps in a white background, giving way to cool snaps.

On the video front

That’s not all. The editing tools on the phone allow you to chop and correct videos as if they were photographs. And the transition between photo and video is darn simple. Say you are taking a picture of a baby and suddenly he or she starts walking; simply hold down the camera button and a video gets recorded. If you really like what you see on the screen, lock it in video recording mode.

The other feature we are looking forward to lies with the app Filmic Pro. At the unveiling in September, a considerable amount of time was spent talking about how one can use an app like this to shoot from two cameras simultaneously, which is great for cinematographers or documentary makers. It’s a feature that was demo-ed on stage but we have to wait a bit longer for the app to be commercially available. The use case for such apps is big — journalism, interviews, unboxing videos…. Directors can, for example, use a three-camera set-up for an interview, giving the editor six options to choose from in one take.

Will buying the iPhone 11 Pro make you a professional photographer? With Apple doing a good job decluttering the camera app and making hardware and software work in harmony to produce photographs that are memorable and shareable, you will get more interested in photography and get a feel of what it is like to be a pro. With the iPhone making into the market in September-October, Apple is able to bypass the mad dash to present features that look at reinventing the smartphone, instead it can choose the new tech it wants to adopt. Yes, there will be a mad rush for 5G next year, Apple will certainly do what it has always done best — get the best out of any technology out there. Meanwhile, Tim Cook and his men took their time to look at the innards of the iPhone to come up with the best smartphone camera out there, which also offers the best battery life.

Some Android fans will be won over by the advanced video capabilities of the phone but, more importantly, the iPhone 11 Pro takes aim at creative pros… and it bowls them over.

I decided to head to Calcutta to experience the Durga Puja vibe for the last few days. Calcutta never sleeps during the Puja days. For all the nine days, the city is one big carnival.

As a visitor, there are two different ways to enjoy Durga Puja in the city. You can either visit the pandals and see the grandest possible idols or visit bonedi or rajbaris and get an intimate experience by celebrating the festival with the old and elite families of the city.

Shooting in the baris with the iPhone 11 Pro Max was a delightful experience. It allowed me to stay inconspicuous and get intimate with the surroundings.

I used the brand-new wide-angle lens to capture the massive Durga idols and Portrait lens to capture all the smaller nuanced rituals. I also absolve the fact that we can now use both the wide and tele lens, allowing for some excellent portraits. The Portrait mode also works in low light and that makes it possible to take portraits in much darker environments.

Some of the pandals are also quite dark and I used the Night mode for those pictures. It’s pretty intuitive to use it as it turns on by itself when the light is low.

Now that I’ve done this festival with the iPhone, I can’t wait to try it out for the next big festival — Dipawali.