What we like most about the set are the colours on offer. The one we had for review was black but there are also Bleached Blue and Pure Mint versions, which is in keeping with the colourful phones that are being released. 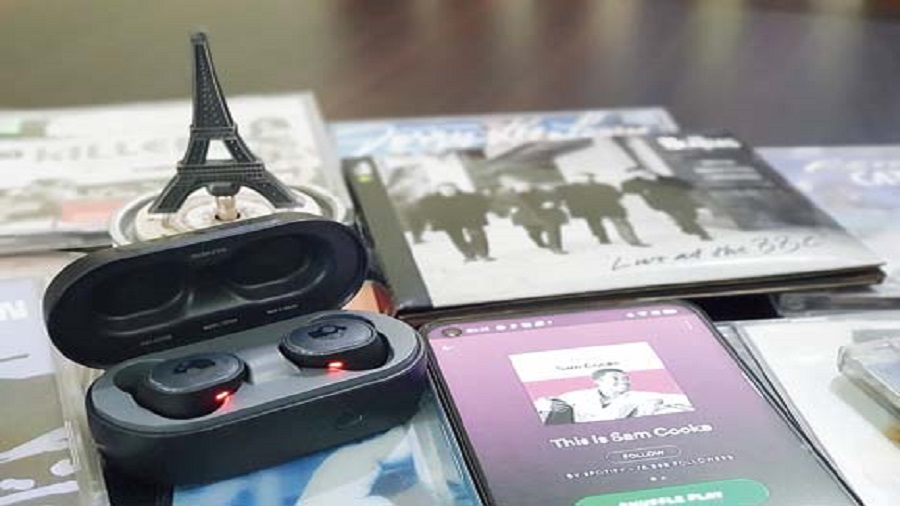 Returning to an audio brand after several years can evoke mixed feelings. Skullcandy has been good to me with their wired sound solutions, so how does it fare in the world of OnePlus Buds and OPPO Enco Free? After a weekend of heavy use, trawling through music by Sam Cooke (Ain’t That Good News) to HAIM’s latest, Women in Music Pt. III, the feeling was largely positive.

Though not the largest carry case around, the one keeping the Skullcandy Sesh Evo safe will make things slightly tight in the pocket if it also has to have your car keys. The case has a good hinge and the cover doesn’t wobble. Pairing the Sesh Evo hardly takes a few seconds. The first thing you will notice about the earbuds is the company’s glossy logo on them; it’s subtle. Behind the logo are the buttons.

The earbuds are made from durable plastic and, of course, the earbud tips are made of silicon, like what most brands offer. The earbuds offer a snug fit and one doesn’t feel any discomfort for a couple of hours. What we like most about the set are the colours on offer. The one we had for review was black but there are also Bleached Blue and Pure Mint versions, which is in keeping with the colourful phones that are being released.

There are three listening modes — music, movie and podcast. Basically, it’s playing around with the EQ. Personally, the movie mode offers a warm feeling with accentuated vocals but do move to podcast mode during, well, podcasts.

The audio quality is pretty good. The bass is decent but the mids and the highs are some of the best in the category. Sesh Evo’s is not targeting people who use a noise-cancelling, truly wireless earphone option from the likes of Sony. That’s a different audience. In case you are seeing a lot of advertisement for the likes of Boat Airdopes or Boult Audio AirBass MuseBuds on Amazon and perhaps you’re in the mood to buy a set of truly wireless earbuds, get the one from Skullcandy, which offers good sound and battery life. Entering the truly wireless segment with the lowest of configurations doesn’t really make sense because it gives customers the feel that the segment is a big mess. With most smartphone brands doing away with the 3.5mm headphone jack, you will be forced to buy a wireless option and it’s best to go with a middling-to-good option.

Coming with the Sesh Evo is a feature which we still don’t find on many wireless earbuds at this price point — single and duo mode.

Basically, you can just put on one of the earbuds and listen to music. It helps when you are travelling around the city and want to listen to things going around you. IP55 rating means you can sweat and get through a drizzle or some dust. The microphone: It’s clear even when you stand near the kitchen sink with the tap running. Yes, the person on the other end would know that you are on a wireless set but the sound doesn’t get distorted.

There are plenty of controls available on these wireless earbuds but, at times, it feels like an overload. There is a button on each of the earbud, which Skullcandy should do away with. You have to mash the buttons to get it to work.

The company wins some extra points for including integration with the Tile app, which helps in case you misplace the device.

If the buds and the case are fully charged, you will get 24 hours of music. The focus of the earbuds is to make the vocals shine and there is a simple EQ mode to adjust sounds to your liking. Simple features like Tile integration and single/duo usage of earbuds make this pair standout. Skullycandy Sesh Evo is a good choice for those switching between music and podcasts with ease.