Advertisement
Home / Science-tech / First Light: Astronomers find what might be the most distant galaxy yet

First Light: Astronomers find what might be the most distant galaxy yet

Astronomers can only guess what these blobs (HD1, HD2) are — galaxies or quasars or maybe something else entirely 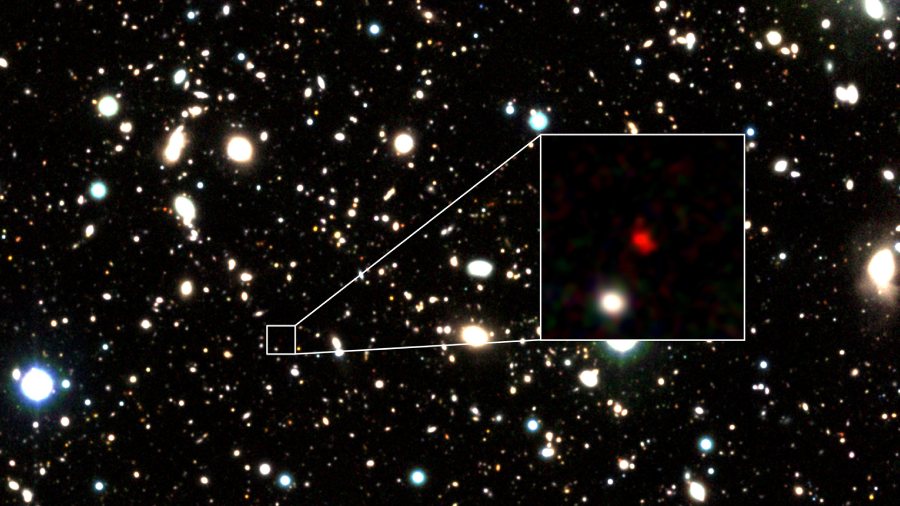 Astronomers have been leapfrogging each other into the past lately. Last month, a group using the Hubble Space Telescope announced they had discovered what could be the most distant and earliest star ever seen, nicknamed Earendel, which twinkled 12.9 billion years ago, only 900 million years after the Big Bang.

Now another international group of astronomers, pushing the limits of the biggest telescopes on Earth, say they have discovered what appears to be the earliest and most distant collection of starlight ever seen: a reddish blob usefully named HD1, which was pouring out prodigious amounts of energy only 330 million years after the Big Bang. That realm of time is so far unexplored. Another blob, HD2 appears almost as far away.

Astronomers can only guess what these blobs are — galaxies or quasars or maybe something else entirely — while they wait for their chance to observe them with the new James Webb Space Telescope. But whatever they are, astronomers say, they could shed light on a crucial phase in the cosmos as it evolved from pristine primordial fire into planets, life and us.

“I am as excited as a kid who spots the very first firework in a magnificent and highly anticipated show,” said Fabio Pacucci of the Harvard-Smithsonian Center for Astrophysics, US. “This could well be one of the first glimmers of light to illuminate the cosmos in a show that ultimately created every star, planet and even flower that we see around us today — more than 13 billion years later.”

Pacucci was part of a team led by Yuichi Harikane of the University of Tokyo, Japan, that spent 1,200 hours using various ground-based telescopes to search for very early galaxies. Their findings were released recently in The Astrophysical Journal and the Monthly Notices of the Royal Astronomical Society. Their work was also reported in Sky & Telescope magazine earlier this year.

In the expanding universe, the farther an object is from us, the faster it is moving away from us. Just as the sound of a receding ambulance siren shifts to a lower tone, that motion causes an object’s light to shift to longer, redder wavelengths. In search of the most distant galaxies, the astronomers sifted through some 70,000 objects and HD1 was the reddest one found.

“HD1’s red colour matched the expected characteristics of a galaxy 13.5 billion light years away surprisingly well, giving me a little bit of goose bumps when I found it,” Harikane said in a statement released by the Center of Astrophysics.

The gold standard of cosmic distances, however, is the redshift, derived by obtaining a spectrum of the object and measuring how much the wavelengths emitted by characteristic elements have increased or shifted to the red. Using the Atacama Large Millimeter/submillimeter Array, or ALMA — a collection of radio telescopes in Chile — Harikane and his team got a tentative redshift for HD1 of 13, meaning that the wavelength of the light emitted by an oxygen atom had stretched to 14 times its wavelength at rest. The other blob’s redshift has not been determined.

That dated the presumed galaxy to only 330 million years after time began, smack in the hunting ground of the Webb telescope, which will also be able to confirm the redshift measurement.

“If the redshift from ALMA can be confirmed, then this would indeed be a spectacular object,” said Marcia Rieke of the University of Arizona, US, who is a principal investigator for the Webb telescope.

According to the story astronomers tell, the road to the universe as we know it started about 100 million years after the Big Bang, when hydrogen and helium created in the primordial explosion began to condense into the first stars, known as Population 3 stars (Populations 1 and 2, which have large amounts of heavier elements, are present in galaxies today).

Such stars, composed of only hydrogen and helium, have never been observed, and they would have been much bigger and brighter than the ones in the universe today. They would have burned hot and died fast in supernova explosions that then jump-started the chemical evolution polluting a pristine universe with elements like oxygen and iron, the stuff of us.

Pacucci said they first thought that HD1 and HD2 were what are called starburst galaxies, which billow with new stars. But after further research, they discovered that HD1 seemed to be producing stars more than 10 times faster than such galaxies usually do.

Another possibility, Pacucci said, is that this galaxy was birthing those very first ultraluminous Population 3 stars. Yet another explanation is that all this radiance comes from material splashing into a supermassive black hole 100 million times the mass of the sun. But astronomers have trouble explaining how a black hole could have grown so big so early in cosmic time.

Was it born that way — in the chaos of the Big Bang — or was it just stupendously hungry?

“HD1 would represent a giant baby in the delivery room of the early universe,” Avi Loeb, a co-author on Pacucci’s paper, said.