Advertisement
Home / Science-tech / Can cryptocurrency ever be environmentally friendly?

Can cryptocurrency ever be environmentally friendly?

It is a huge energy consumer; with a carbon footprint comparable to Kuwait's, according to the Bitcoin Energy Consumption Index 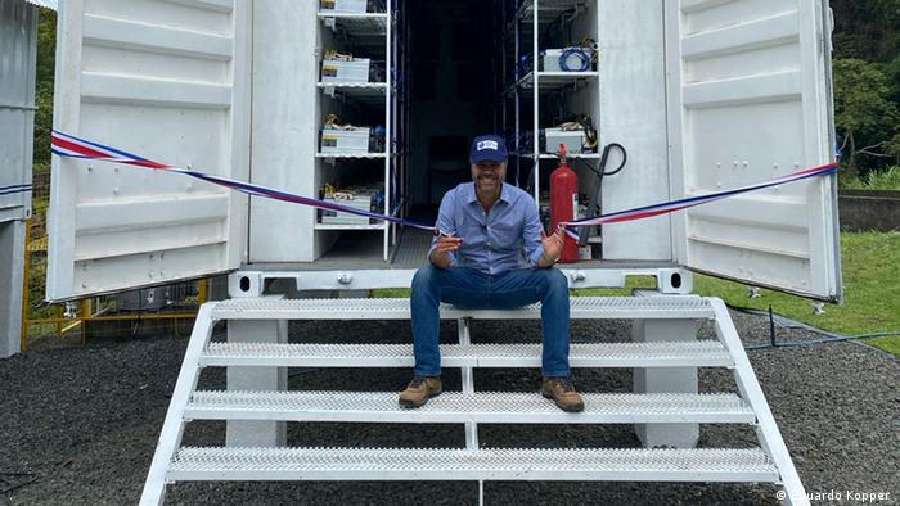 At the end of 2020, after 30 years in operation, Eduardo Kopper had to shut down the turbines of his hydroelectric plant, Poas I, located in Costa Rica's Central Valley region.

The Costa Rican Institute of Electricity — the country's public electricity distributor — rejected Kopper's bid to sell his energy because the country has a surplus of renewable power.

"Essentially, we couldn't do anything," Kopper said. "It was a worrisome situation. We were trying to at least sustain our workers."

It was then that he learned about bitcoin. The cryptocurrency is a huge energy consumer, with a carbon footprint comparable to Kuwait's, according to the Bitcoin Energy Consumption Index.

Dedicating his plant to Bitcoin mining struck Kopper as a way to convert his green energy directly into currency. By April 2021, after three months of inactivity, Poas I was back — as a renewables-powered cryptocurrency mining center.

And Kopper isn't the only one. Miners across the Americas, and particularly in the United States, are jumping on the "green Bitcoin" bandwagon.

Large US crypto mining companies — such as Bitfarms and Neptune Digital Assets — are now marketing their operations as "green." Legislators in Brazil, meanwhile, are debating a tax exemption for renewable-powered crypto mining.

A waste of precious energy?

Bitcoin's staggering energy consumption is central to how its blockchain technology functions. New bitcoins are "mined" by solving complex math puzzles, a feature called "proof of work." This ensures the blockchain network is decentralized. But it also demands a vast amount of processing power, as miners race to solve these problems first.

Cognizant of the environmental impact of the energy-hungry currency, more than 200 companies and individuals launched the Crypto Climate Accord last year, committing to net-zero operations by 2030, mainly by switching to renewable power sources.

But not everyone sees green mining as a win-win solution to cleaning up the dirty currency. Economist and Bitcoin expert Alex de Vries said expending precious renewable power on "random computation," rather than sectors that provide jobs and other economic benefits to a national economy, can be problematic.

In fact, until recently, renewables already played a major role in crypto mining, as they're often the cheapest source of power. A study by cryptocurrency analysis firm CoinShares estimated that in 2019, at least 74% of Bitcoin's global energy consumption came from renewables, much of it cheap Chinese hydropower.

But, in 2021, the Chinese government banned all cryptocurrency-related activities, in part because of their huge energy consumption. Sweden, meanwhile, has called on the European Union to ban crypto mining, arguing that it diverts renewable power that could be used to decarbonize other sectors, putting climate targets in jeopardy.

Jose Daniel Lara, a Costa Rican energy researcher at UC Berkeley, concedes that in Costa Rica, which has an energy surplus, there's some logic to green cryptocurrency mining. Ideally, Costa Rica would export its surplus power. But that just isn't possible at the moment. As much as its energy-poor neighbor Nicaragua, for example, might benefit from Costa Rican energy, it doesn't have the infrastructure to import it.

Bitcoin mining has allowed Kopper to revive two of his shuttered 1 MW hydropower plants and convert the electricity into something that can be exported without the need for physical power grids. "Here we found a way to transform energy into a digital token," he said.

He installed a containerlike storage room for central processing units, sealed it against Costa Rica's abundant heat and moisture, and began by renting some of these CPUs to mining companies abroad. Now, he's also mining bitcoins himself. He's avoided laying off his staff of 25 employees, and is planning to reactivate a third plant in the coming months.

The Poas I crypto-mining center is the first of its kind in Costa Rica, but Kopper has had interest from other private energy providers in the country looking to join the business. And elsewhere, companies claim that crypto mining can actually help solve challenges inherent to renewable power production.

In Texas, the tech company Lancium is building bitcoin mines that will run on renewable energy. But instead of competing with traditional power consumption, it's marketing the project as a way to stabilize the grid.

The difficulty with renewables — such as Texas' growing wind capacity — is that electricity production fluctuates with the weather. An oversupply can cause grid congestion, and even result in blackouts, which is why fossil-fueled power stations that can be ramped up or down are often used to balance renewables-heavy power systems.

Lancium says its model allows bitcoin operations to provide this service instead, by simply ramping mining activity up or down according to how much excess power is available. Lara says in this way, projects like Lancium's could actually support the expansion of renewable power and reduce the need for fossil fuels.

Globally, de Vries said, the green cryptocurrency wave isn't having much of an impact on its colossal carbon footprint.

In August 2020, the US was home to 5% of global bitcoin mining. A year later, that figure had risen to 35% according to data from the University of Cambridge. Texas in particular is positioning itself as a crypto capital, but despite projects like Lancium's, most of the state's power supply still comes from coal and gas.

Kopper insists that, with a global shift toward renewables, green mining could clean up bitcoin's carbon footprint in the long run. "We're making an effort to differentiate dirty Bitcoin from clean Bitcoin," he said. "It might take some time for consumers to recognize this, but I think it's a matter of time."

But de Vries believes that making cryptocurrencies more energy-efficient would be a better solution. Some — like Cardano and Binance — are already using a different model called "proof of stake," by which miners put their own coins at stake to engage in transactions, instead of solving computations.

"If you're using proof of stake, you don't need a hardware competition anymore," de Vries said. "You just need a device with connection to the internet. Just the proof of work part increases the energy needed by a factor of 10,000."

Ethereum, the world's second-largest cryptocurrency, is planning to switch to proof of stake this year. The technology is still new, but de Vries says if it works for Ethereum, other currencies could follow.

For Kopper, however, proof of work is still essential to his successful new business model. And he has no plans to return Poas I to its former use.

"As we're learning how to optimize the mining process, we're achieving better profitability," he said. "Today, I'd think we're not going back. We've found a new market for our electricity."