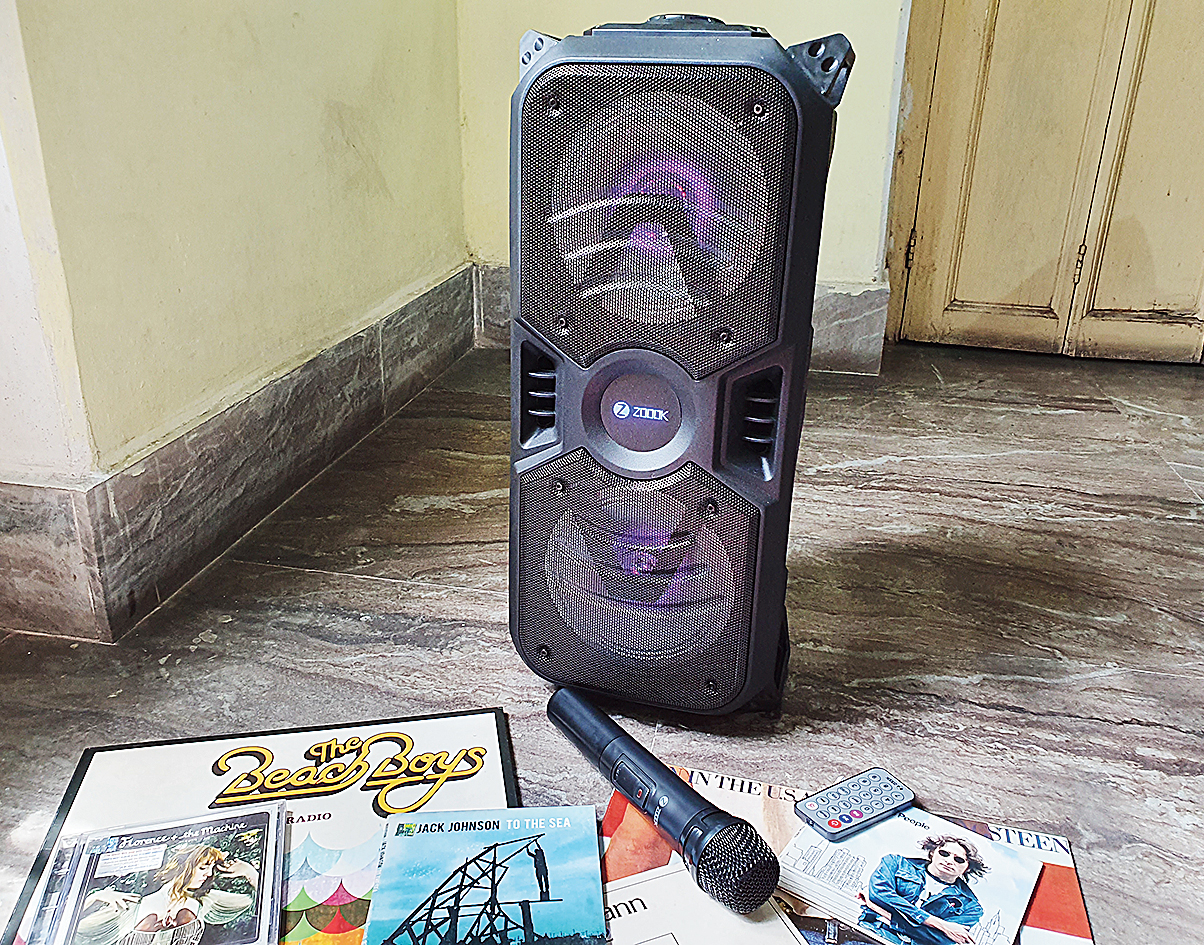 Who needs Bluetooth speakers in the era of Amazon Echo and Google Home speakers? There is a sizeable crowd that hasn’t warmed up to smart speakers. Then there are those who like weekend getaways. And also those — like yours truly — who still believes in owning music and playing the same almost every morning. Finally, how can we forget the ever-dancing-jumping kids who have just started inviting friends over for (hours of!) karaoke.

The Zoook ZB-Rocker Thunder Plus addresses all of the above while delivering a sound which differs substantially from the many Bluetooth speakers that could be lying around one’s house. We took the Bluetooth speaker through the paces over 10 days and found it a reliable (and uncomplicated) way of delivering what it promises — music without cutting too many corners.

It obviously has not been designed for bookshelves! What looks more like a floor speaker is actually light enough to be carried around the house and to camping parties where it would easily fit in with its rugged looks and flashing lights. The two 6.5-inch speakers (40W PMPO) put out a lot of bass than most Bluetooth speakers in the market.

To power up, there is a dial on the top which also acts as the volume button. So far the knob hasn’t acted up or become wobbly. Above the knob are the usual controls — power input, mode, mic in, TF card slot, USB flash and forward/backward buttons.

Though there is zero metal on the frame, the Thunder Plus neither looks cheap nor fragile. One wouldn’t be scared lugging the 3.5kg gizmo around (or accidentally dropping it). It’s all good.

Obviously, this is the most important department. The ZB-Rocker Thunder Plus puts out big, powerful sounds that can easily fill a living room and much more. But my mornings are made special by the likes of Doobie Brothers, Beach Boys, Gladys Knight & The Pips, Bruce Springsteen and Rod Stewart rather than the EDM bandwagon. Did the ZB-Rocker rock?

Let’s start with The Boss. The problem with most Bluetooth speakers — barring the ones from established brands — is that when cranked to full blast, one just can’t accept the blare. The Rocker doesn’t hurt the ears and kick drums don’t overwhelm vocals. The speaker doesn’t take the life out of Born In The USA or Dancing In The Dark, neither does it muffle Springsteen’s haunting ballad The Streets of Philadelphia.

Modern productions are pitch-perfect — especially dance numbers — and clean. It’s the older recordings that test the speaker the most because if something’s unclear, speakers play up the problem. Enter Beach Boys, the group that was all about creating brilliant sonicscapes.

The album we liked playing again and again is That’s Why God Made the Radio. The ZB-Rocker offers a balance between bass, midrange and treble and one doesn’t really mind the effort filling up a quiet room. But when the speaker is taken for a spin and is kept outdoors, a low-degree chill sets in. It’s like the Beach Boys are feeling slightly cold on the beach!

Having said that, the clarity of the output is quite good for the price one is paying. And even at high volumes, there is not too much of white noise.

Karaoke is big among kids and adults don’t mind it either, especially after glugging a few beers. The microphone that comes with the device is big enough to feel comfortable in the hand and only requires an AA battery to power it.

The downside to Bluetooth is that it has been designed to work at close range to source. The ZB-Rocker has enough range (Bluetooth v4.2) and the sound doesn’t drop out if it’s around 15metres away from the device. The only quibble would be that like with most Bluetooth speakers, it’s not ideal to pair with a TV or a gaming device because there is the typical audio delay of about one-fifth of a second.

Finally, we tried connecting a not-so-typical sound source to test the line-in feature. A basic turntable. Well, this time we tested the LP of the Beach Boys album and the sound certainly wasn’t bad. Slightly thin but it’s all right.

The ZB-Rocker certainly has a distinctive look and has a battery life (4,400mAh) which is enough to last a party. Overall, it deserves a mini drumroll.