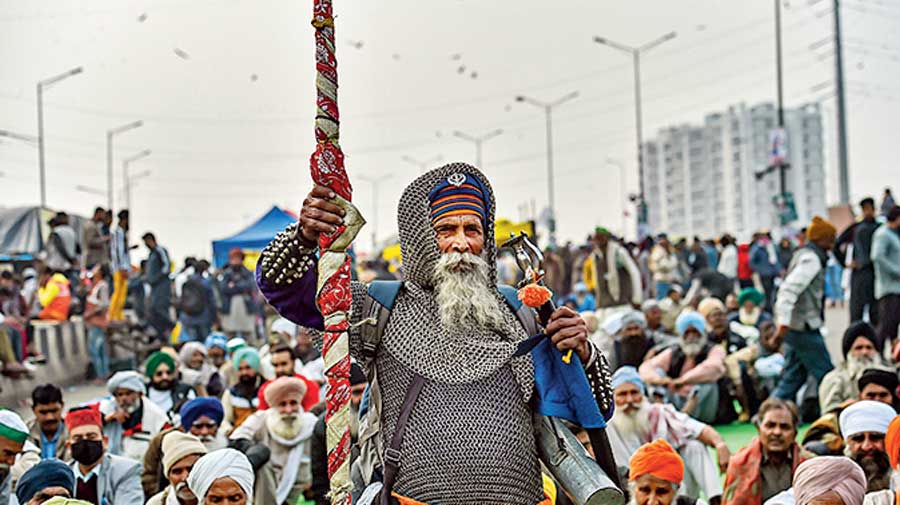 The winter of 2020-21 has seen a massive sit-in on Delhi’s border led by Sikh farmers demanding the repeal of the three agriculture Acts rushed through Parliament by the Central government in September.
File picture
Mukul Kesavan   |   Published 17.01.21, 12:43 AM

The time of Covid in India was bookended by two different yet similar winter vigils. The winter of 2019-20 saw sit-ins led by Muslim women in Shaheen Bagh and other places in protest against the Narendra Modi government’s Citizenship (Amendment) Act. The winter of 2020-21 has seen a massive sit-in on Delhi’s border led by Sikh farmers demanding the repeal of the three agriculture Acts rushed through Parliament by the Central government in September.

The similarities between these two agitations are instructive, as are their differences. Both movements were protesting laws drafted by a democratically elected government, duly passed by Parliament. Both were, consequently, forms of civil disobedience: the sit-ins happened in public spaces, on major thoroughfares, and called attention to their causes by bringing traffic in their vicinity to a standstill. These were civil society movements, initiated, led and sustained by civil society groups that saw the government’s laws as existential threats to their rights and livelihood. Party political leadership in both cases was conspicuous by its absence. Opposition leaders occasionally signalled their support but they contributed little or nothing to the agenda and the organization of these agitations.

The Shaheen Bagh sit-in was a direct response to the inauguration of this Second Republic. The BJP’s signature triumph has been the political marginalization of Muslims. The Shaheen Bagh vigil was born of quiet desperation: the Muslim women of that neighbourhood were defending their constitutional rights as citizens against the BJP’s bid to smuggle in a religious test for citizenship in the shape of the CAA.
File picture
Advertisement

Both movements filled a political vacuum created by the massive electoral success of the Bharatiya Janata Party and the consequent disarray in and demoralization of Opposition parties. The absolute majority won by the BJP in the 2019 general election was, for Modi and his party, the curtain raiser for the construction of a new republic based on the Gujarat Model. This consists of a systematically communalized polity, a segregated society where the public subordination of a Muslim underclass consolidates a murderous majoritarianism and a streamlined economy rendered fit for purpose for the ambitions of the BJP’s billionaire cronies.

The Shaheen Bagh sit-in was a direct response to the inauguration of this Second Republic. The BJP’s signature triumph has been the political marginalization of Muslims. The Shaheen Bagh vigil was born of quiet desperation: the Muslim women of that neighbourhood were defending their constitutional rights as citizens against the BJP’s bid to smuggle in a religious test for citizenship in the shape of the CAA.

The farmers’ protest is a response to the third aspect of this new national dispensation. The commitment of the BJP to the rationalization of India’s economy — and, therefore, its rural hinterland and its agriculture — for the benefit of friendly tycoons is absolute. The failed land acquisition bill in the early part of Modi’s first tenure and now this stalled bid to get Punjab’s farmers to love the stringent discipline of contract farming and the free market are, like love jihad and lynching, essential elements of the Gujarat Model. When the predominantly Sikh peasantry of Punjab refused to buy into this bracing vision of billionaire heaven, the BJP government of Haryana vandalized its highways by digging trenches across them to stop the farmers from marching on Delhi and the stand-off (or sit-in) at Tikri, Singhu and other places began.

The Muslim women at Shaheen Bagh and the Sikh farmers on Delhi’s border are religious minorities standing up for causes larger than themselves. The idiom of the posters, the slogans, the songs and speeches at Jamia and Shaheen Bagh through the months of the protest was rigorously republican, centred on the constitutional rights of citizens and the iconic figure of B.R. Ambedkar. Given the near-absolute failure of India’s Opposition parties to stand up for secular citizenship in general and Muslim citizens in particular, the women of Shaheen Bagh and the students of historically Muslim universities like Aligarh Muslim University and Jamia Millia Islamia stepped into the breach and held the line. Their example inspired a remarkable mobilization across India in support of constitutional rights.

Punjab and Haryana, the homes of the Green Revolution, were the two states whose farmers were most affected by the Central government’s agriculture laws. Like the Muslim women at Shaheen Bagh, the farmers demonstrating at Singhu and Tikri are defending themselves and, at the same time, making a larger argument about the proper relationship between government policy and the economic future of farming communities. The initiative was taken by farmers’ unions, not by political parties. They were joined by farmers from Haryana and Uttar Pradesh and other states who were not Sikhs but it is important to notice here that, as in Shaheen Bagh, the defence of the larger cause — citizenship on the one hand and a vision of rural livelihood on the other — was pioneered by religious minorities standing up for themselves.

If the similarities between the two vigils are instructive, their differences teach us valuable truths too. Being a Sikh in India is existentially very different from being a Muslim. Sikhs, even in this time of economic stagnation in Punjab, are, according to the National Sample Survey Office, the richest religious community in India. Muslims are, by nearly every measure, consistently the poorest. Institutionally, Muslims are radically underrepresented in government service, the corporate world, in education and in all forms of salaried employment. Where Muslims are constantly stigmatized as false citizens by parties like the BJP, the Hindu Right has long lauded Sikhs as India’s ‘sword arm’ and Sikhs have traditionally been the backbone of India’s armed forces.

These differences account for the differences in the scale and the reception of the two protests. The protesting farmers at Singhu and Tikri numbered in the tens of thousands. The scale of the farmer’s agitation and the logistics needed to sustain it made even as spirited and crowded a sit-in as Shaheen Bagh look small in comparison. The government’s suggestion that its agitating opponents were anti-nationals, perverse squatters inconveniencing blameless citizens, found many takers when it came to Shaheen Bagh and very few when it came to the farmer’s sit-in. Thanks to history and sentiment, the Sikh farmer has always been seen as the salt of the Indian earth. It’s hard to demonize members of a community synonymous with patriotic military service.

The BJP tried. Piyush Goyal called them Maoists and Naxals. The chief minister of Haryana and a general-secretary of the BJP made dark allegations about Khalistani infiltration. Every synonym in the BJP’s anti-national lexicon was pressed into service: tukde-tukde gang, urban naxal, Pakistani agents, terrorists, international conspirators, even — this according to Madan Dilawar of the Rajasthan BJP — chicken-eating spreaders of avian flu.

The malignant instinct of the BJP to impugn the character and the patriotism of religious minorities has been on display during the farmers’ agitation. However, unlike the full-court press mounted against the anti-CAA protesters, which culminated in brutal, orchestrated communal violence, the Modi government has stepped more carefully with the farmers’ movement for several reasons. It is terrified that it might become a rallying point for peasants from other provinces. Punjab is a border state with a Sikh majority that the BJP recently lost to the Congress and no party can win Punjab in the future if it alienates Sikhs. When Parkash Singh Badal returned his Padma Vibhushan in protest, a tremor ran through the ruling establishment. Also, given the size and the success of the Sikh diaspora and its consuming interest in the Punjab, the Central government has had to mind its manners.

The solicitude of the Supreme Court in the matter of the farmers’ agitation, its willingness to exceed its constitutional remit to ‘suspend’ the agricultural laws for the duration of unasked-for arbitration, makes for an interesting contrast with the court’s impatience with the Shaheen Bagh sit-in and its passivity over the question of the CAA’s constitutionality. The court did not, in that instance, suggest expert arbitration nor did it step in to ‘suspend’ the Citizenship (Amendment) Act. Even more intriguing is the government’s connivance in the ‘suspension’ of its own laws.

The movement inspired by the Muslim women of Shaheen Bagh was stifled by pogrom and pandemic but the farmers’ protests are ongoing. Despite their different trajectories, they teach us a lesson that we would do well to learn: in political cultures beleaguered by majoritarianism, mobilized minorities offer the most reliable resistance to bigotry and reaction.