Wily KCR cosying up to BJP, it's party time for Rajnikanth

DELHI DIARIES: Like Punjabi pop, farmers protest finds a place in weddings too 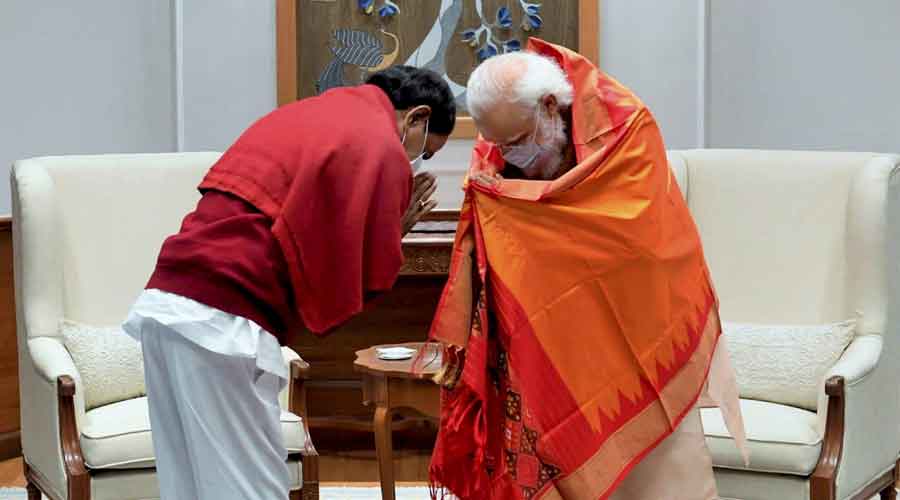 If politics is the art of the possible, no one possibly practises it better than K Chandrashekar Rao, the chief minister of Telangana and head of the Telangana Rashtra Samithi. The unexpected performance of the Bharatiya Janata Party in the Hyderabad municipal corporation polls seems to have turned on the wily side of Rao. The TRS chief arrived in Delhi on Friday for a three-day visit and went about meeting top BJP ministers. He was photographed presenting a shawl to the home minister, Amit Shah — the same person who, while campaigning in Hyderabad only two weeks earlier, had launched a bitter attack on KCR, as Rao is popularly called, seeking to make the BJP the main challenger to the ruling TRS. Rao is also likely to call on the prime minister, Narendra Modi. Many feel that the BJP could soon emerge as the principal Opposition in the state replacing the Congress. Rao had managed to first befriend the Congress and then bleed the party out in Telangana. Rao had, it is believed, managed to convince the Congress high command that he would merge his party if his demand for the creation of the Telangana state, by bifurcating Andhra Pradesh, were fulfilled. Just ahead of the 2014 general elections, the United Progressive Alliance government agreed to divide Andhra Pradesh. Let alone a merger, Rao went on to finish off the Congress in Telangana. Is he trying to do the same with the rising BJP? The saffron party, however, feels that their leaders are the champions of the game.

On the verge of revealing his political colours — Rajinikanth is set to launch a new political party — the Tamil superstar is offering a different food for thought to his supporters in his ‘home city’, Bangalore. The actor-turned-politician would not want to lose the opportunity of testing his popularity beyond Tamil Nadu. The legion of his die-hard fans, who strive hard to ensure that every film of their ‘thalaivar’ clicks at the box office even in Karnataka, could come in handy in his political career. Born in a Marathi-speaking family as Shivaji Rao Gaekwad, raised and having worked in Kannada-speaking Bangalore before making it big in Chennai, Rajinikanth would certainly aim to cash in on his popularity in Karnataka as well. Unsurprisingly, his recent visit to Bangalore to meet his elder brother created quite the buzz, apart from all the optics.

The ruling BJP’s stellar performance in the panchayat and municipal polls in Arunachal Pradesh — scheduled for December 22 — without a vote being cast throws light on the growing strength of its consolidation at the grass roots since the party unseated the Congress in 2016. The BJP has won 96 of the 242 zilla parishad posts and 5,410 of the 8,196 gram panchayat posts uncontested,
apart from five of the 58 corporator seats under the Itanagar Municipal Corporation.

The results for the uncontested seats also reveal the free fall of the Opposition, the Congress, in the frontier state which had once been its bastion. The response of the political parties also reflects their mindsets. After the results, the BJP radiated positivity, with the chief minister, Pema Khandu, hailing the victory as ‘historic’ and crediting it to the intelligence of the voters and the unprecedented development work going on in the state under the BJP-led government. In contrast, a senior Congress leader told the media that the BJP’s outstanding electoral success was owing to “purchased faith by illegitimate means”. He even went on to attribute the success of the ruling party to the state election commission which conducts the polls, conveying — as political watchers observed — a defeatist and jaded mindset. There has been no talk of ‘looking within’ till now. No wonder the Congress is in what appears to be terminal decline since 2014, in spite of a bright spark here and there.

Over the years, HD Kumaraswamy has battled poor health and political pitfalls. A year after he lost power as the BJP poached 17 lawmakers of the Congress-Janata Dal (Secular) coalition, Kumaraswamy seems to have put the past behind him. The second son of the former prime minister, HD Deve Gowda, is on a mission to ‘rebuild’ his party by consolidating its traditional Vokkaliga votes and winning back the trust of Muslims whose support he had pretty much lost on account of his misadventure of allying with the BJP in 2006. As a first step, Kumaraswamy called on his former party colleague, CM Ibrahim, of the Congress. The message was loud and clear: return to the JD(S) and be its Muslim face. Many in the JD(S) feel that Ibrahim would take the offer since he has been virtually sidelined in the Congress.

Punjabi pop has become a staple of Indian weddings, particularly in the North. Now, it seems, the farmers’ protests are becoming just as infectious, to the extent that showing support to the movement has become a fad in Haryana and Punjab. Wedding cars now bear banners of solidarity with the protests along with the usual frills. Some families are requesting guests to donate what they would give as wedding gifts for the farmers’ protests. Such is the connect.