Why the Sidhu-Amarinder feud puts Congress in a spot 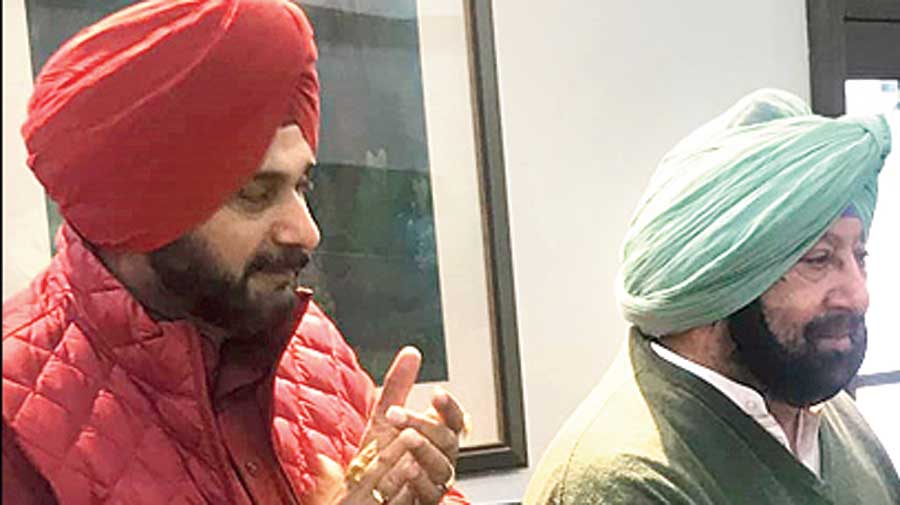 With farmers livid with the Bharatiya Janata Party over the new, contentious farm laws, there was a presumption that the next assembly election in Punjab would be a cakewalk for the Congress. But there is a side show that got bigger and cast a shadow on Congress politics in the state. This is the running feud between the chief minister, Amarinder Singh, and the mercurial Navjot Singh Sidhu who resigned from the ministry and kept aloof. The fight is now full blown, with Sidhu taking a public stand against the CM in the sacrilege case and accusing him of shielding the Badal family. He said that most members of the legislative assembly know that the government is running according to the wishes of the Badals more than those of the Congress. The CM hit back, daring Sidhu to contest against him in Patiala if he wanted to forfeit his deposit.

What is worrying for the Congress is that Sidhu has erased all evidence of him being a Congressman from his Twitter account even as he retains his photograph with Rahul Gandhi and Priyanka Gandhi Vadra on his profile. Sidhu is known for his closeness with the Gandhi family, but his open revolt against the Punjab CM has complicated the situation, compelling the high command to keep its distance from him. Sidhu has been trying to occupy the political space against the Badals by attacking them regularly and making the dignity of the Sikh religion his main plank by maintaining that seeking justice for the desecration of the Guru Granth Sahib in 2015 was his sole objective. If the high command fails to bring about a truce, the Congress is in for trouble in Punjab, which is going to the polls in early 2022.

The goodwill that the All India Congress Committee general secretary in charge of Assam, Jitendra Singh, earned with his deft handling of the faction-ridden state unit in the recently-concluded state assembly polls has been all but lost following his explanation for the party’s defeat at the recently-held Congress Working Committee meet. Singh, according to media reports, blamed the other five factions in the state unit and the new regional parties — the Raijor Dal and the Assam Jatiya Parishad, which ate into the Congress votes — for the loss. The reasons, party insiders say, held true till Singh and the Chhattisgarh chief minister, Bhupesh Baghel, set the well-oiled campaign rolling since January. Pre-poll talks with both parties were almost sealed till the Congress started acting ‘arrogantly’ after it got the Bodoland People’s Front on board. It would have augured well for Singh and the party had he said that it was a ‘collective failure’ instead of shifting the blame on to the state leaders who put up a united front. Singh’s explanation has further demoralized the state unit; a feeling of being let down is sweeping through the Assam Pradesh Congress Committee. Party insiders said Singh should have also conveyed to the CWC that most senior leaders were opposed to an overt tie-up with the All India United Democratic Front and had wanted a new PCC president even before Singh was appointed in-charge, and that apart from consulting senior leaders, he also religiously followed a few others, including a “young general secretary not in touch with ground realities”. Party insiders fear the state unit will go the Tripura and Nagaland way if remedial measures, such as urgently appointing an ‘acceptable, hardworking and fearless’ Congress Legislature Party leader and PCC presidents, are not initiated, more so because they are now up against Himanta Biswa Sarma, the new chief minister, whom the Congress let go of in 2015 without adequately weighing the pros and cons.

Santosh Gangwar, the Union minister of state with independent charge for labour and employment, recently handed a letter to the Uttar Pradesh chief minister, Yogi Adityanath, pointing out the mismanagement of the Covid-19 situation in Bareilly, which the former represents in Parliament. His office in Bareilly leaked the letter to the media. A few days earlier, Kaushal Kishore, the BJP MP, declared before TV cameras that he had written to the CM that he would sit on a dharna if the oxygen requirements of Covid-19 patients were not fulfilled immediately. Brijesh Pathak, the UP law minister, wrote to senior health department officers that even he was not able to arrange for hospital beds. He personally leaked the letter to the media.

Many BJP MLAs have written similar letters to Adityanath and circulated them in the media. Udai Veer Singh, the Samajwadi Party leader, summed up this trend as the ‘creation of a shield’ for future elections: “I am an MLC, depending on my party chief to win the council election. The BJP’s Lok Sabha and assembly members know that their government has failed but they are preparing ground for future elections. They are writing letters and making statements against their own party government on the direction of their own leaders. The ruling party leaders are not only telling their voters that they tried in vain to help the people out but also trying to eclipse the Opposition in the process.”

On May 13, Delhi lowered its oxygen demand from 700 metric tonnes to 582 MT. The fight for the 700 MT allocation between Delhi and the Centre went up to the Supreme Court. On the day of the final hearing, Arvind Kejriwal publicly thanked Narendra Modi. An Aam Aadmi Party official removed journalists of a city paper from WhatsApp groups for press releases after one of them reported on the Delhi government’s multiple failures in planning for the oxygen crunch. Now, as vaccination for people below 45 years has reduced to a trickle, the deputy CM, Manish Sisodia, has revealed a letter from the manufacturer of Covaxin that it can’t supply more vaccines to the capital “as per the directives of concerned government officials” who, Sisodia says, are the Centre. The AAP has made oxygen and vaccines a political plank with two MLAs issuing daily bulletins on both.