Advertisement
Home / Opinion / When the PM poured chai for his interviewer

When the PM poured chai for his interviewer 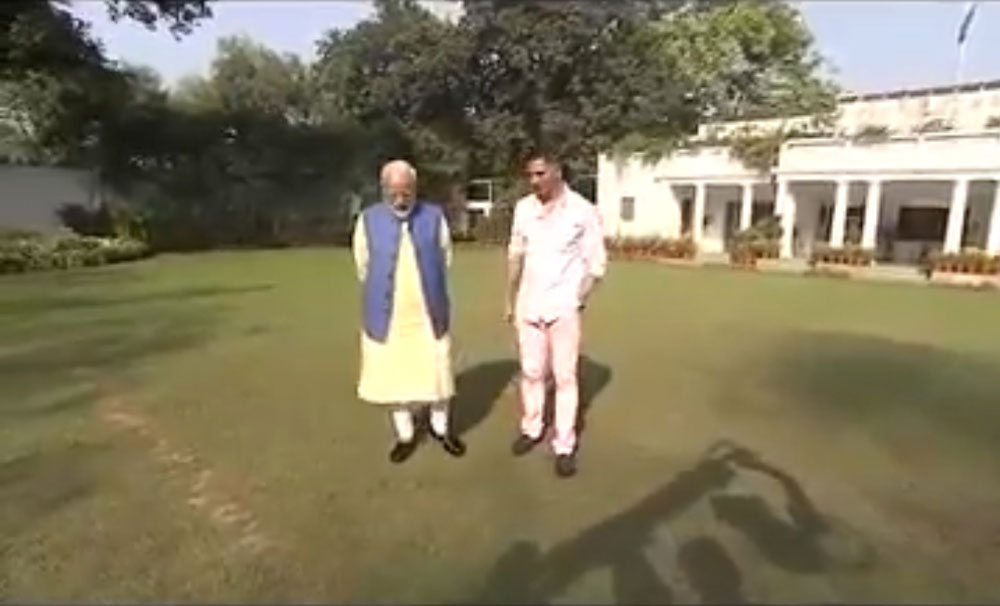 I come to bury Caesar, not to praise him.)

The interview began with a disclosure. At the very outset of his chat with Prime Minister Narendra Modi, actor Akshay Kumar said he had not brought along with him any question political. The setting was sylvan. There was just enough light and shade. And the chirping of birds made the perfect background score. Akshay was dressed in baby pink and white, colours of innocence. The interviewee’s sartorial choices didn’t matter. His white mane, his white beard did. The PM’s response sounded like appreciation but he was also repeating and re-enforcing an idea. He said, “I like this. All day I am mired in politics and you wanted to talk about the lighter things…halki phulki, apolitical things…” Abracadabra apolitical. Apolitical abracadabra. The spell was cast.

The aam, the khaas and the subaltern

(Here, under leave of Brutus and the rest–

…Come I to speak in Caesar’s funeral.)

And so, slap-bang in the middle of the general elections and EC diktats, and talk of model code shode, the interview rolled for millions to see. Apolitical. Apolitical. There was that aam beginning, with the khaas subaltern touch: “My driver’s daughter wanted to know if you like eating mangoes, and how — sliced or...,” Akshay prodded gently, his demeanour respectful, the interested expression on his clean-shaven face unwavering. From aam, the chat moved to the kindness of the kisan, the PM’s own background, the characteristic hardships of that life. Veering. Steering. Apolitical. Was it true that Modi had once wanted to be either a sanyasi or a jawan? Affirmative. Humbly affirmative. Apolitical.

(Brutus says he was ambitious;

And Brutus is an honourable man.)

The Prime Minister lobbed little nuggets — how time was when he didn’t know a word of English, but he had a thirst for education. He spoke of managing anger and its expression, the philosophy of detachment, his mother. All relatable. Apolitical. Apolitical. He was also seen pouring chai for his interviewer. He spoke about discipline and how putting anyone down was not his thing. But he did crack a genial joke about the samajwadi or social worker and his double standards. And when asked about his friends in the Opposition, he remembered to bring up Ghulam Nabi Azad and Mamata Banerjee. Akshay did not bring up competitive communalism, but the PM shared an anecdote about competitive mithaiism — how when Didi learnt that the Bangladesh Prime Minister, Sheikh Hasina, sends him sweets from Dhaka, she too took to sending him Bengali sweets. Modi spoke about ayurveda and mul chinta or indigenous thought. And when Akshay Kumar requested him to walk as they talked in true tradition of interviews political, he got up readily. 'If Aladdin's genie made an appearance, which three wishes would you ask him to grant,” said Akshay. “I would ask him to tell our educationalists to stop repeating this story,” said the PM. “And tell our future generations about the virtues of hard work instead of teaching them to wish,” he added. Apolitical. Apolitical. The lone worrying thing, if at all: he kept referring to Aladdin as Alauddin.