POLITICS AND PLAY | What the sangh parivar stands for 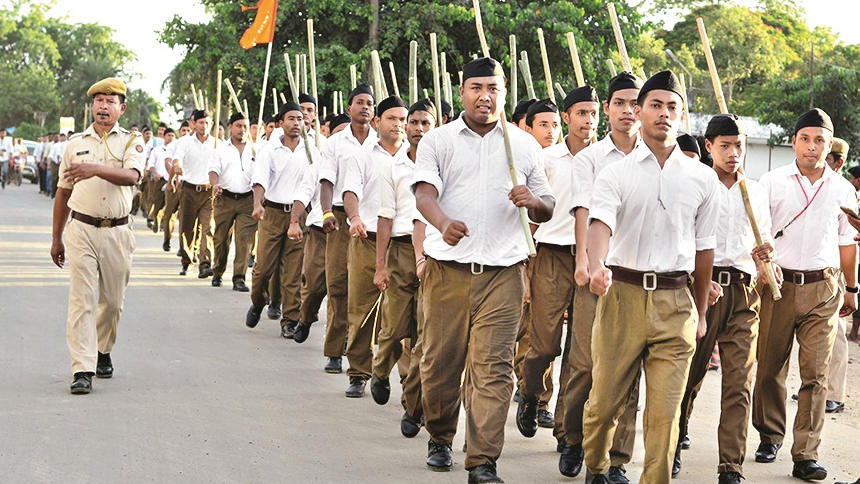 In his book, Mahatma Gandhi: The Last Phase, Gandhi’s last secretary, Pyarelal, writes that the partition of India in 1947 and the horrific violence that accompanied it “provided a fruitful soil for Hindu chauvinism. Its most serious manifestation was infiltration of the Hindu middle class and even the Government services by the R.S.S. [Rashtriya Swayamsevak Sangh]. It had begun to command the secret sympathy even of a section of Hindu Congressmen.”

Pyarelal then outlined for his readers what this organization of Hindu chauvinists stood for, and what its aims were. Thus he wrote: “The R.S.S. was a communalist, para-military, Fascist organisation... Their declared object was to set up Hindu Raj. They had adopted the slogan, ‘Muslims clear out of India.’ At the time they were not very active, at least overtly, but it was being darkly hinted that they were only waiting for all the Hindus and Sikhs in West Pakistan to be evacuated. They would then wreak full vengeance on the Indian Muslims for what Pakistan had done.”

As newly-independent India grappled with the wounds of Partition and the plight of the refugees, it faced a serious threat from within, an internal enemy, so to speak. This was the rising tide of Hindu chauvinism. In the second half of 1947, the RSS was winning converts among the Hindu middle class, senior officials and politicians among them. However, two remarkable Hindus stood out resolutely against sectarianism and chauvinism. They were willing to stake their own lives to defend the rights of Muslims who had chosen to stay behind in India.

These exemplary Hindus were the prime minister, Jawaharlal Nehru, and his mentor, Mahatma Gandhi. As Pyarelal wrote: “Gandhiji was determined not to be a living witness to such a tragedy. The Muslims were in a minority in the Indian Union. Why should they feel insecure as to their future as equal citizens in the Indian Union? It hurt him to see anyone live under fear, unable to walk with his head erect. Eager always to champion the cause of the under-dog and to identify himself with the down and out, he set himself to put heart into the Indian Muslims.”

It is instructive to read these words today, seventy-odd years after the events they describe. In the second half of 1947 the RSS was a marginal player in Indian politics and public life. It hoped to increase its influence by exploiting the communal tensions of the time; fortunately for India, the organization’s rise was stopped by the resolve of Gandhi and of Nehru. Nehru made it clear to everyone in his government that India had no intention of becoming a Hindu Pakistan, while Gandhi fasted successfully for Hindu-Muslim harmony in Calcutta and in Delhi. Gandhi was murdered by an RSS man on January 30, 1948; and his martyrdom horrified and shamed his fellow Hindus, bringing them to their senses. The RSS’s designs were thwarted — for the moment.

As I write this, however, the RSS is no longer marginal, but hegemonic in Indian politics and public life. The organization’s political front, the Bharatiya Janata Party, controls the Central government and many state governments. Large sections of the Hindu middle class are stridently vocal, rather than secretive, in support of their political and ideological agenda. Top civil servants, top diplomats, even some top army officials have abandoned their commitment to the Constitution and become partisan supporters of Hindutva and the ruling regime.

Of the RSS’s core beliefs in 1947, Pyarelal observed: “Their declared object was to set up Hindu Raj. They had adopted the slogan, ‘Muslims clear out of India.’” The first part of that statement remains still entirely valid. The second half has been modified, if not in entirely salutary ways. In the immediate aftermath of Partition, many leaders of the RSS wanted to rid India of Muslims entirely. However, by the 1950s they realized that this was no longer feasible. The community was very large, and so widely spread out across the country that a full-scale purge was beyond anyone’s fantasies. Now the RSS’s attitude towards Indian Muslims was reframed as follows: Muslims who were born here and live here could stay on in the country, so long as they recognized the political, theological, social, economic, institutional, and moral supremacy of the Hindus.

As I have pointed out elsewhere, this political model of the RSS is, ironically, borrowed from Islam — medieval Islam. In the heyday of the Caliphate, Muslims had distinctly superior rights to Jews and Christians. The latter were not explicitly persecuted; however, they had to accept an inferior, or second-class, status in order to raise their families and eke out a livelihood. Likewise, in India today, if the RSS prevails, Muslims shall have to accept second-class status too.

Scholars have written many learned works on the history and sociology of the RSS. For its part, the RSS has published dozens of books and pamphlets seeking to explain to non-members what it stands for. Notwithstanding this large (and ever growing) body of literature, the ideology and programme of the RSS can be summarized in six words. These are: We shall show Muslims their place.

The RSS claims to stand for the recovery, the restoration, the resurrection of Hindu pride. However, in practice, the beliefs and actions of the organization, and of the political party associated with it, are determined more by prejudice and paranoia than by pride per se. Consider thus the recent actions of the Union government, and of state governments run by the BJP. The destruction of the state of Jammu and Kashmir, the triumphalism about the construction of a temple in Ayodhya, the laws against inter-faith marriages, and above all the Citizenship (Amendment) Act and the savage persecution of those who peacefully opposed it — all these are essentially animated by the desire to show Muslims their place.

In Mahatma Gandhi: The Last Phase, Pyarelal wrote about a conversation that he was witness to in Delhi in September 1947. I quote: “A member of Gandhiji’s party interjected that the R.S.S. people had done a fine job of work at Wah refugee camp. They had shown discipline, courage and capacity for hard work. ‘But don’t forget,’ answered Gandhiji, ‘even so had Hitler’s Nazis and the Fascists under Mussolini.’ He characterised the R.S.S. as a ‘communal body with a totalitarian outlook.’”

How do Gandhi’s views of the RSS hold up seventy-three years later? Very well indeed, except that the order of the adjectives he used might have to be reversed. Now, the RSS is perhaps better seen as a totalitarian body with a communal outlook, rather than the other way around. In 1947, the RSS was on the fringes of Indian life; in 2020, it is massively influential. The members of the RSS who control the Union government have subjugated the press, allegedly tamed the judiciary and used bribery and coercion to undermine or overthrow state governments run by other parties. The new laws aimed at curbing NGOs are animated by the desire to reduce to insignificance all voluntary organizations that do not owe allegiance to the Hindutva ideology.

The RSS and the BJP seek to achieve dominance over the political process, over the institutions of the State, over civil society, even over what people eat, how they dress, and whom they can or cannot marry. This desire to control every aspect of life in the country, whether political, social, institutional or ideological, perfectly fits the textbook definition of ‘totalitarian’. Meanwhile, their continuing efforts to stigmatize and demonize Muslims clearly demonstrate their ‘communal’ mindset.

Mahatma Gandhi’s characterization of the RSS in the second half of 1947 was then, and remains now, entirely (and disturbingly) accurate. Whether on the fringes of power or at the heart of power, the RSS has been nothing less, and nothing more, than a communal body with a totalitarian outlook.