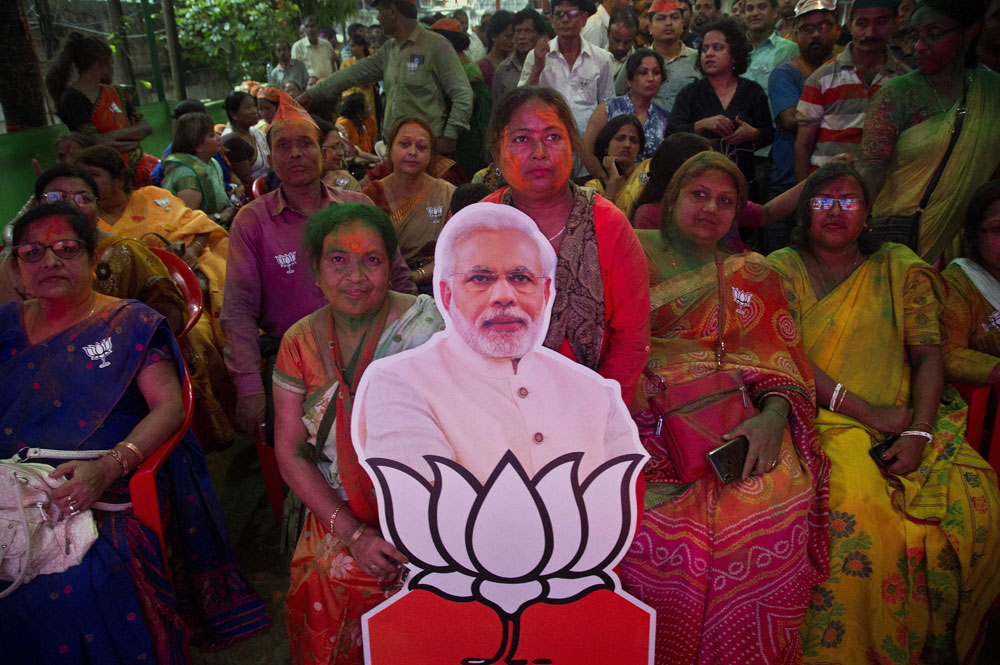 Every general election is distinctive and unique, yet few commentators can resist the temptation of comparing one poll with another. As I see it, the election that has just concluded bears a notable resemblance to the elections of 1971. Then, as now, there was a hegemonic party in power; a party with a footprint across large parts of India. Then, as now, this party was opposed by a variety of parties whose influence was more restricted, confined to particular states. Then, as now, this motley group of Opposition parties was divided by ideology and social composition, yet united by a single, overwhelming, obsession — with the personality of the prime minister.

The election slogan that helped Indira Gandhi win the 1971 general election is still remembered today. It is less well known that this slogan was not coined by her or her party spontaneously. Rather, it was a response to a slogan that the Grand Alliance opposing her sought to make central to its campaign. This was ‘Indira, Hatao’; let’s get rid of the prime minister, Indira Gandhi, who was the symbol of all that (in the Opposition’s view) was wrong with the ruling party, the government, and the country. It was in answer to this slogan aimed at her that Indira Gandhi came up with the response, ‘Woh Kehte Hain Indira Hatao, Mein Kehti Hoon Garibi Hatao’; they want to get rid of one person they don’t like, Indira, whereas I want to rid the nation of poverty itself. It was a devastating juxtaposition, of constructive social policy versus personal hatred, and it helped Indira Gandhi and her Congress Party decisively win the 1971 elections.

Back in 2014, when he was running as an insurgent, Narendra Modi came up with some catchy slogans, such as ‘Sabka Saath, Sabka Vikas’ and ‘Achchhe Din’ — my party and I are for the welfare of all, and if you elect me good times will follow. Both these slogans, like Garibi Hatao, were positive in intent; they promised happier, less poverty-stricken days for the Indian voter regardless of caste or community.

What slogans might Modi have come up with on his own, unprompted, while running as an incumbent prime minister in the 2019 general elections? We shall never know. For, from the second half of 2018, a variety of Opposition leaders had decided, individually and without consultation with one another, that their own campaigns would focus on the personality of the prime minister. Thus Mamata Banerjee, Chandrababu Naidu, Arvind Kejriwal and Rahul Gandhi all chose to repeatedly target the prime minister. Some charged him with authoritarianism, others called him corrupt, yet others called him authoritarian as well as corrupt. All insisted, emphatically and repeatedly, that Modi (not the Bharatiya Janata Party or the National Democratic Alliance) had to go.

The Opposition campaign in 2019 thus came largely to revolve around the theme of ‘Modi Hatao’. In this respect, it strikingly resembled the Opposition campaign of 1971. How it would have worked had the Pulwama terror attack not happened one cannot say. But after that attack, the prime minister decided to accept the challenge, and make it a referendum on himself. Unlike Indira Gandhi in 1971, he did not promise to end poverty, but to make the nation secure from its enemies. He did not coin a pithy slogan per se, yet the burden of his campaign became, ‘Woh Kehte Hain Modi Hatao, Mein Kehta Hoon Desh Ko Mazboot Aur Surakshit Banao’ — they say get rid of Modi, whereas I say let’s make the nation strong and secure.

Modi was very willing to have the 2019 campaign revolve around himself. This is because he had already been working assiduously towards personalizing the very process of governance. Government advertisements attributed every act of State largesse to the prime minister. The message that these were Modi’s personal gifts to them was carried by BJP workers to voters. If a woman in a village got a subsidized gas cylinder, it was because Modi had given it to her. If a farmer got a loan, it was because Modi had personally made sure the farmer would get it. If a school got a new blackboard, it was because Modi had thought of giving it to them. Even if a new bridge was built across the river Brahmaputra, a project spanning the regimes of several prime ministers and involving dozens of engineers and thousands of construction workers, both State and party propaganda made sure that it was seen as the work of Modi alone.

Previous governments — those of the BJP and the Congress — had designed and implemented dozens of welfare schemes in the past, but these were seen as the benevolence of the State as a whole, or of a particular party. To claim that every act of public welfare was the handiwork of a single individual, Modi, was novel, as well as malevolently effective.

After the Pulwama attack was followed by the Balakot strike, the campaign became ever more personalized — from the prime minister’s side. He turned Rahul Gandhi’s juvenile slogan, ‘Chowkidar Chor Hai’, inside out, by affirming that he was indeed a chowkidar of the nation’s interest. He talked of how Pakistan feared him, and him alone. He mocked the Opposition leaders as effete, and even as unwitting agents of the enemy. Press the lotus button, the prime minister told voters, and the vote will come straight to me. The individual BJP candidates for Parliament did not matter at all.

In 1971, when it came to the removal of poverty, the voters trusted Indira Gandhi more than her rivals; for she had just recently abolished the princely order and nationalized the banks, whereas her opponents broke bread with maharajas and praised capitalists. In 2019, when it came to national security, the voter trusted Modi far more than his rivals; for he exuded strength and authority in a manner which they decidedly did not. In both cases, the personalization of the election by the Opposition played into the hands of the ruling party.

The BJP ran its campaign on the single note of Modi, Modi, Modi. The claim that only the prime minister could assure the nation’s security against its external enemy was a major theme. A second claim, made more insidiously and covertly, was that only Modi could stoke Hindu pride, and safeguard Hindu interests against the enemy, whether this was Pakistan in particular or Muslims in general.

From the results of the 2019 general elections, one may draw three broad conclusions. The first is that it confirms what I wrote in 2017, in the second edition of my book, India after Gandhi: “The BJP is today India’s sole national party, with a major presence in a majority of the states of the Union. It is to national politics now what the Congress [of the 1950s and 1960s] once was.”

The second conclusion is that India is becoming ever more of a Hindu country. Unlike in 2014, this time around, the BJP chose to foreground the fact that they are a Hindu-first party. This was manifest in, among other things, the rhetoric used by its party president against Muslims, the choice of sectarian bigots like Pragya Thakur as candidates, and the prime minister’s own flaunting of his personal religious identity through his night in a well-appointed cave near Kedarnath. Ground reports from journalists suggest that many voters chose Modi because they felt he embodied Hindu pride, and would teach Muslims a lesson.

The third conclusion is that large sections of the electorate have become captivated by a cult of personality. The question now is whether the nation as a whole will be captured by this cult as well. In his last speech to the Constituent Assembly, B.R. Ambedkar, quoting John Stuart Mill, warned his fellow Indians not “to lay their liberties at the feet of even a great man, or to trust him with powers which enable him to subvert their institutions.” As he pointed out: “Bhakti in religion may be a road to the salvation of the soul. But in politics, Bhakti or hero-worship is a sure road to degradation and to eventual dictatorship.”

Who did Ambedkar have in mind when he issued this warning? Was he asking Indians never again to worship an individual as they had worshipped the recently deceased Mahatma Gandhi? Was he telling them not to treat their immensely charismatic prime minister, Jawaharlal Nehru, as infallible, but to scrutinize his actions and words and always hold him and his government to account? Perhaps he had both these examples in mind. In the event, Ambedkar’s warnings turned out to be chillingly prescient, when, after her victory in the 1971 elections and the military triumph against Pakistan that followed, too many Indians willingly laid down their liberties at the feet of Indira Gandhi who saw in their bhakti an invitation for her to subvert our country’s institutions.

Of these three conclusions, the first should worry us the least. Parties rise and fall, grow and decline. The BJP’s hegemonic status will most likely dissipate in time, as the Congress’s once hegemonic status did. The cult of personality should worry us somewhat more. For, while it remains very unlikely that there will be another Emergency, it may well be that, like Indira Gandhi in 1971, Modi will see the election results as an absolute endorsement of himself and seek to identify party, government and nation even further with his wish and his will. That said, for politicians as well as for parties, success is not permanent. The age of Narendra Modi will end, as the age of Indira Gandhi once did.

What should worry us the most, perhaps, is the insidious recasting of the Republic of India as a Hindu State. The forces of hate and bigotry unleashed during the five years of the Modi government and further intensified during the election campaign have seeped deep into the marrow of everyday life. The traditions of pluralism so nobly nurtured by the nation’s founders have never been more fragile. On how quickly and how effectively they can be restored may depend the future of the Republic.

The story of Modi that triumphed the Opposition