Advertisement
Home / Opinion / What's behind the 'Azadi March' in Pakistan

What's behind the 'Azadi March' in Pakistan

Marchers are demanding PM Imran Khan's resignation, and fresh elections without the interference of the army 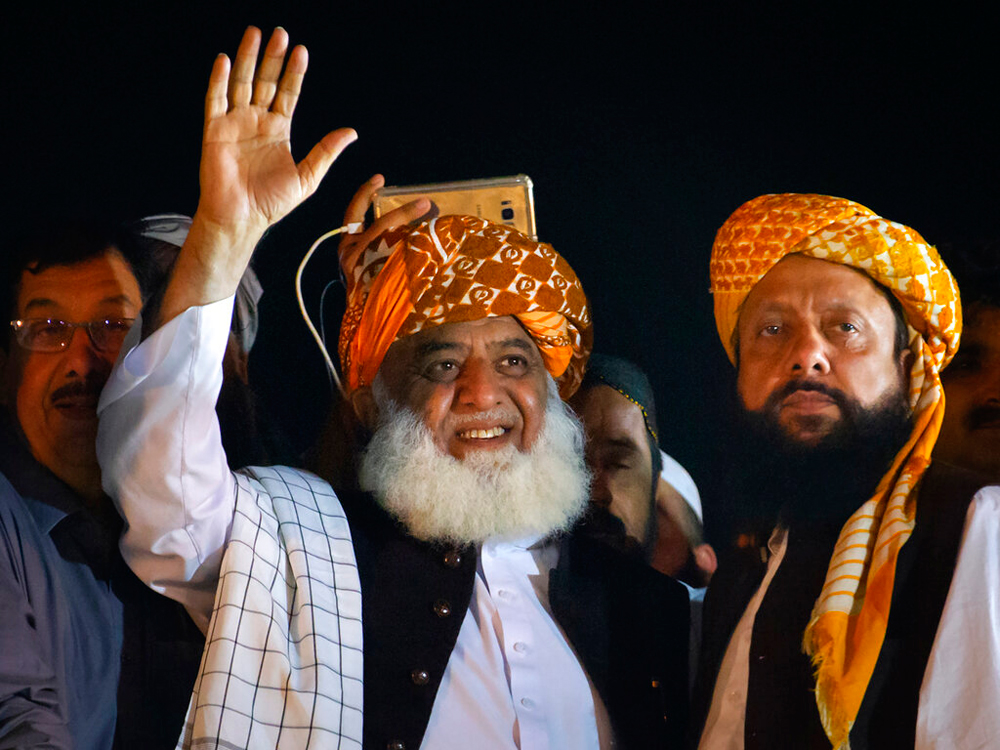 There is an ‘Azadi March’ (Freedom March) taking place in Pakistan’s capital at the moment. Led by Maulana Fazlur Rehman, the Azadi March is an anti-government protest rally organized by the joint Opposition. The participants include the two mainstream parties — the Pakistan Muslim League-Nawaz and the Pakistan Peoples Party — as well as other smaller parties.

For those who are not aware of Maulana Fazl, he is not just a religious leader but one who has been in politics for over two decades. He is known to be one of the sharpest politicians around. The Maulana is chief of the Jamiat Ulema-e-Islam-Fazl. He is seen as a wheeler-dealer in Pakistani politics, one who remains relevant always. He lost the elections in 2018. The PML-N and some other Opposition parties fielded him as their presidential candidate in August 2018 against Arif Alvi from the Pakistan Tehreek-e-Insaf and Chaudhry Aitzaz Ahsan from the PPP.

The Maulana has been extremely vocal about rigging in the 2018 general elections, but this particular march is not just about rigging. It is also about his political rivalry with the prime minister, Imran Khan. Little wonder then that the primary demand of the Azadi March participants is Khan’s resignation. Other demands include fresh elections, elections without the interference of the army, and the protection of the Constitution.

Asha’ar Rehman wrote in Dawn that “It is not just the election results that have led the maulana to his present state of mind. There are other factors that signify the bitterest kind of rivalry between Imran Khan and Maulana Fazlur Rehman. In the speeches of the PTI leader, the JUI-F chief has been a metaphor for corruption, someone who is ready to drop his principles at the first flash of worldly gains.”

Khan refers to Fazlur Rehman as “Maulana Diesel”, a derogatory nomenclature used on account of the rumours of kickbacks received for diesel smuggling in Afghanistan. Khan has also been critical of the coverage that the Maulana has received in the Indian media in recent weeks. He said that the Azadi March was being celebrated in India as if the Maulana was an Indian national. “Look at how happy the Indian media is by showing Maulana, as if he is an Indian national and is coming to liberate India.”

Khan is not the only one calling the Maulana a foreign national. The Maulana himself has (mis)used the religion card against the premier and also called Khan a foreign agent with links to the ‘Jewish lobby’ — a propaganda reference and false allegation — because of his first marriage with Jemima Goldsmith.

The PML-N and the PPP were not happy that these dates were announced without consultations with them. The PPP has from day one opposed the use of the religion card by the Maulana against the PTI. It is also opposed to dharnas. The PML-N, on the other hand, was cautious at first about joining the Maulana but its leader, Mian Nawaz Sharif, supported the Maulana’s march unequivocally. Before Sharif’s health deteriorated to the extent of him being critical, he was presented before an accountability court where he told reporters that the PML-N is fully supporting the Maulana and that he has written a letter to his brother, Shehbaz, instructing him to support the Azadi March. When the Maulana’s caravan reached Sindh, the PPP leadership welcomed it. But when the same caravan reached Lahore, the PML-N leadership was conspicuous by its absence. This led to rumours of Shehbaz Sharif defying his elder brother’s orders. Nawaz Sharif had been taken to hospital after his platelet count dropped to 2,000. He was later released on bail by the courts owing to his deteriorating health. The Maulana’s caravan reached Islamabad a day after October 31.

On November 1, the Maulana addressed the Azadi March in Islamabad. Shehbaz Sharif and the PPP chairman, Bilawal Bhutto-Zardari, were also on stage and addressed the rally. Shehbaz Sharif left soon after his speech while Bilawal Bhutto remained there till the Maulana ended his speech. The Maulana gave a two-day ultimatum to Khan for his resignation. The two-day deadline passed on Sunday night. The Maulana and the Azadi March protesters remain in Islamabad while the government is trying to reach a breakthrough by sending delegations that are negotiating with the Opposition. So far, the situation remains fluid.

The Maulana’s march has come under criticism for a number of reasons. There is an absence of female participation. The use of the religious card against Khan has also led to severe criticism. While the Opposition has distanced itself from the misuse of religion, the Maulana and his own constituency have no qualms about using it. There is also criticism regarding the demand for the prime minister’s resignation even though Khan had made a similar demand during his 2014 dharna. Critics say that if a prime minister is forced to resign because of protesters besieging the capital, it will set a wrong precedent.

While there are many rumours doing the rounds, there is little chance of Khan resigning. Fresh elections are also out of the question at the moment.

The government has also come under attack for the kind of language that is being used against the marchers. Many have pointed out that the government should try to deal with the protesters with a cool head instead of antagonizing the Maulana and his followers.

Some say that the Maulana will go back soon while others think he will stay on a bit longer. The Maulana has already achieved many things: his appearance in the media was banned before the march; now he is being covered live. He needed relevance and political credibility; now he is being seen as the face of the Opposition despite not being in Parliament himself. Whatever happens, the government is under a lot of stress because of the Maulana’s march. The Maulana has indeed arrived.