What lies beneath Novak Djokovic’s gesture at the US Open 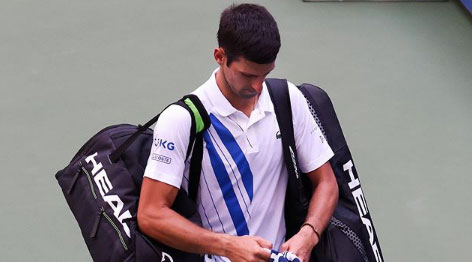 All tennis fans know by now that at the US Open, Novak Djokovic, usually so skilled at hitting the ball, sent one in an unforeseeable direction. It is just possible that he was not looking. But it certainly hit a line judge in the throat, who collapsed. Fortunately, the line judge was not injured. Later, Djokovic made sure that she was alright and perhaps — who knows? — even sent her some flowers. Although he argued his case for 10 minutes, the number one seed was disqualified. The Official Grand Slam Rule Book, which deals with these events, is quite clear on this point, and Djokovic was charged with “unsportsmanlike conduct”. The rules also set out that “The Referee in consultation with the Grand Slam Chief of Supervisors may declare a default for… a single violation of this Code.” The conclusion was inescapable.

There was nothing controversial about the decision to send Djokovic home on this occasion, and he is not the first player to have endured such a fate at a Grand Slam. Precedents include John McEnroe at the Australian Open (1990), Carsten Arriens at the French Open (1995), Jeff Tarango at Wimbledon (1995), Stefan Koubek at the French Open (2000). Again, Richard Gasquet during the qualifiers of the US Open (2004) and Serena Williams, who lost the final of the US Open (2009) after earning a penalty point at match point against her.

This was not the first time either that Djokovic had been confronted with disciplinary matters during the course of his career. He could have been defaulted at the French Open against Tomás Berdych (2016, the year he won) for throwing a racket, which miraculously missed a line judge, or at the Masters Tournament in London (2016) for throwing a ball in the stands but, fortunately, not hitting any spectator. Of course, 2020 has not been a very good year for Djokovic. He organized exhibition matches in the Balkans in June where a few players (including himself) ended up testing positive for Covid-19 after partying and not respecting physical distancing. Just before the US Open, he launched his own players’ union, the Professional Tennis Players Association, in direct opposition to the ATP.

The point is not whether Djokovic ‘had it coming’ or whether he courts controversy. Neither is it to decide whether Djokovic has a temper worse than, say, Roger Federer (he probably has one) or Rafael Nadal (who regularly receives code violations for taking too much time between serves). It is not even to rule whether such conduct is unworthy of such a champion (Djokovic ended up apologizing and promising to reform), or how tennis has dealt with the antics of a long list of players — from Ilie Nastase to Nick Kyrgios (who said that if he had done the same, he would now be serving a ban). Nor is it about the decay in standards of behaviour since the good old days.

What has changed, though, are the ways in which the actions of tennis players are instantaneously scrutinized by all forms of media, from personal Instagram accounts to journalists in the stands, from private videos going viral on social media to live television coverage. While this may be true of other sports, the facts that tennis is an individual sport, the important commercial interests that have developed around tennis, and the genuine popularity of the game have contributed to placing the actions of players under the limelight.

What is sometimes described as the pressure of the star system is a complex set-up, embraced by sportspersons as much as it is imposed upon them. The star-champions construct their image, sometimes with the help of sponsors, from the smooth elegance projected by Federer to the rebel attitude struck by Kyrgios. Sometimes, they use this image to question received ideas of acceptability, or to bring out the political undercurrents of sports — such as Serena Williams having to confront the racism present in sports or Naomi Osaka commemorating the victims of police violence on her face masks — because they are part of society. Djokovic’s gesture finds its place in this context, both of the media sphere to which he obviously contributes and of the ‘image’ that the tennis champion wants to display. It is just possible that there is a degree of uncertainty, not apparent in the figures cut by Federer or Nadal, about Djokovic’s place in the world of tennis. He does not fit into the identifiable type (the ‘good guy’, think Pete Sampras, the ‘villain’, Jimmy Connors, the ‘rebel’, André Agassi and so on). His style of play is perhaps not as appealing as Federer’s attacking game; nor does it have the gritty power of Nadal’s clay-court dominance. He has carried the art of defence to the extremes of perfection, his return-of-serve is probably the best in the world now that Andy Murray has faded, but this style does not necessarily generate emulation and admiration. This is perhaps what makes his clumsy positionings, his (mistimed?) commitment to the organization of the game, or his fits of temper more difficult to appreciate. Although he is at the top of the game and has a devoted following, Djokovic finds himself in a more ambiguous position than his contemporaries, Federer and Nadal.

On a lower key, Djokovic’s default at the US Open is reminiscent of Zinédine Zidane’s infamous head-butt in the final of the World Cup 2006. Admittedly, the stage on which Zidane was operating was larger than the fourth round of a US Open without spectators, and Djokovic was not playing his last professional match. But both had a record of acts of rebellion (it was not Zidane’s first red card), both players were nearing glory, with Djokovic, who has not lost a single match in 2020, edging closer to Nadal and Federer in Grand Slam titles. And both gestures put an end (temporarily, in the case of Djokovic) to these hopes, while keeping open the possibility, for Zidane, of what might have been, and for Djokovic, of what may still happen. What the Belgian novelist, Jean-Philippe Toussaint, has called the “melancholy” of Zidane, on that night in Berlin, perhaps took hold of Djokovic as well, that something inside us which turns against us, the dizzying combination of exhaustion and nervous tension of planetary sports. Zidane, that night, was carried by two contradictory undercurrents of melancholy. The first was caused by the sense of time passing, of the looming end, of the player who cannot bring himself to take his last bow. The second was linked to the desire to be done with it as quickly as possible, the wish to leave the pitch and to return to the dressing rooms because of weariness and exhaustion. No one saw his gesture, no one understood his act. Djokovic, on the other hand, was unlucky, clumsy, but his actions were the sign of a deeper condition. Ultimately, such gestures can be condemned by the rule book, sanctioned with a red card or a default. But they resist interpretation. They tell us a lot more about the world of sports and the place that sportspersons try to occupy within this world. But there is no apparent reason behind them.

The author is professor of English Literature at Sorbonne University, Paris