What does Bengal think today? 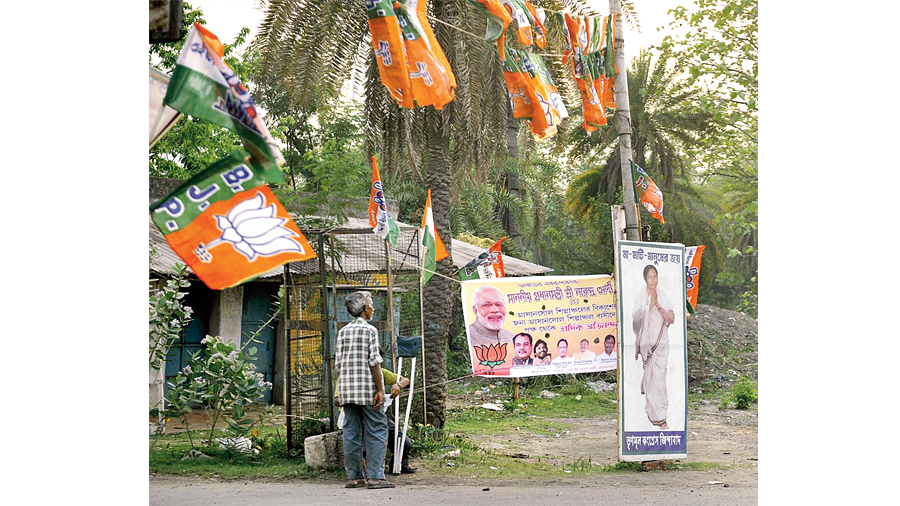 The outcome of the ongoing elections to the West Bengal legislative assembly will have important implications for the working of not just the state’s polity but on the future of democracy in India. If the Bharatiya Janata Party is able to come to power for the first time in Bengal, there will be no stopping Narendra Modi’s relentless drive to create an Opposition-mukt Bharat and his unabashed endeavour to establish what can best be described as an ‘electoral autocracy’ in the country.

Even if the BJP fails to ‘obtain’ a majority of seats in the assembly and form the government in the state, it would certainly improve its position and claim a ‘victory’ of sorts. Is it then a win-win situation for Modi whatever be the outcome of the polls? Not really. If a non-BJP government led by the Trinamul Congress (on its own or with the support of others) returns to rule Bengal for five years, it would temper Modi’s ambitions and constrain the BJP juggernaut, at least for a while. That would indeed be a welcome development for those opposed to the right-wing, Hindu-nationalist political party and its ideological parent, the Rashtriya Swayamsevak Sangh.

Over the last seven years and especially during the 2019 Lok Sabha elections, voters have voted very differently in state elections and national elections. Social scientists like Abhay Dubey of the Centre for the Study of Developing Societies describe this phenomenon as the sarkarikaran — ‘governmentalization’ — of politics in the country in which the incumbent regime (at the Centre or in the states) has an advantage. This is what makes Bengal so important for the BJP even if there is good reason to believe that things are far from hunky-dory for the party and that it would be very challenging for it to repeat its impressive performance in the Lok Sabha elections two years ago when it won 18 out of the 42 parliamentary seats with a roughly 40 per cent share of the votes polled.

There are huge imponderables and a number of questions the answers to which would be known only when the election results are declared. Which way would the anti-TMC vote go? Would it get split between the BJP and the Left-Congress combine, thereby helping the ruling party in the state? Or would the votes of those opposed to the BJP, including the votes of Muslims, get fragmented in a manner that would help the saffron party the way it did in 2019? There are theories galore and speculation is rife but no political pundit really knows what the outcome would be or even whether the electoral contest would be close or one-sided.

I recently spoke to a number of political observers and I am summarizing the views of three of them here, simply because I agree with much of what they say. The political scientist, Suhas Palshikar, argues that the outcome of the Bengal elections is important because it would determine whether the BJP is able to spread its narrow notion of nationalism further and whether its version of electoral autocracy (chunauvi tanashahi) would get a ‘booster dose’. Indeed, in the BJP’s scheme of things, all those opposed to the elected Supreme Leader have to be branded as anti-nationals.

During its rule, the use of the colonial-era anti-sedition law has multiplied manifold. One estimate by Article 14 indicated that 96 per cent of the sedition cases filed against 405 Indians for criticizing political leaders and governments over the last decade had been registered after Modi came to power in 2014. The website, which tracked sedition cases in the decade between January 2010 and December 2020, stated that 149 people were accused of making “critical” or “derogatory” remarks against the prime minister and 144 were accused of making remarks against the Uttar Pradesh chief minister, Yogi Adityanath.

The author and journalist, Sagarika Ghose, said that the 2021 assembly elections in Bengal can be compared to the Battle of Plassey when the army of the East India Company led by Robert Clive defeated the much larger force of the then Nawab of Bengal, Siraj-ud-Daulah. Clive succeeded because he was not just a military leader but also a strategist who won over the nawab’s commanders like Mir Jafar. The BJP, too, has won over key commanders of the TMC like Suvendu Adhikari. Even if there are some who would describe her contention as exaggerated and consider her analogy stretched, few would disagree that the impact of the Bengal elections would be pivotal to Indian politics and its after-effects may be felt for decades.

The political psychologist, Ashis Nandy, said that in these elections the West Bengal chief minister, Mamata Banerjee, is pitted against a man “who is presiding over the destiny of 1.3 billion Indians”. The question that Nandy and others have raised in the larger political context is whether voters perceive political parties and leaders not in binary black-and-white terms but as ‘lesser’ or ‘greater’ evils while preferring the former. Will such perceptions influence voting trends in the Modi versus Mamata battle?

One of the biggest changes that Modi has brought about is that India’s multi-party elections have been converted into an American-style contest between two personalities. Hence, his party’s frequent reference to Rahul Gandhi. The BJP, on its own, increased its vote share from around 31.3 per cent to 37.4 per cent between 2014 and 2019, while that of the National Democratic Alliance went up from approximately 37 per cent to around 45 per cent implying that in 2019 more than half of those who voted did not support either the BJP or its partners.

But the ‘personalization’ of politics cuts both ways, particularly in Bengal. Just as Modi is bigger than the party he leads, so is Mamata Banerjee. She is the TMC. In this electoral battle between the two, there is a difference however. Didi’s emotional appeals to voters in general and to women in particular may give her an edge over the BJP. And this is where parochial appeals could matter. Subterranean understandings and covert coalitions cannot be ruled out. If the outcome of the polls is close, a variant of the ‘Maharashtra model’ could be replicated in Bengal, again with a difference because the BJP has no allies in Bengal like the Shiv Sena.

One famous quote that Bengali ‘exceptionalists’ still love — while others pour scorn over it is — the one attributed to the ‘moderate’ Congress leader from Maharashtra, Gopal Krishna Gokhale, who died at the young age of 48 in 1915. Both Mohandas Karamchand Gandhi and Mohammed Ali Jinnah considered Gokhale to be their mentor. But the economic decline of Bengal began soon afterwards with the capital moving from Calcutta to Delhi followed by the bloody partition of the subcontinent and the de-industrialization of the state. Will Gokhale be proved right or wrong more than a century later?

The answer to this question would depend on the ideological predilections and perspectives of the particular reader. How many voters in Bengal are cognizant of the national importance of their franchise? I wish I knew. Will May 2 provide us the answers? The wait could be excruciatingly long, like the elections conducted over eight phases in the state for the first time.

The author is an independent journalist