Once cricketing arenas become platforms for patriotism, the temptation to use those arenas to stage dissent will grow 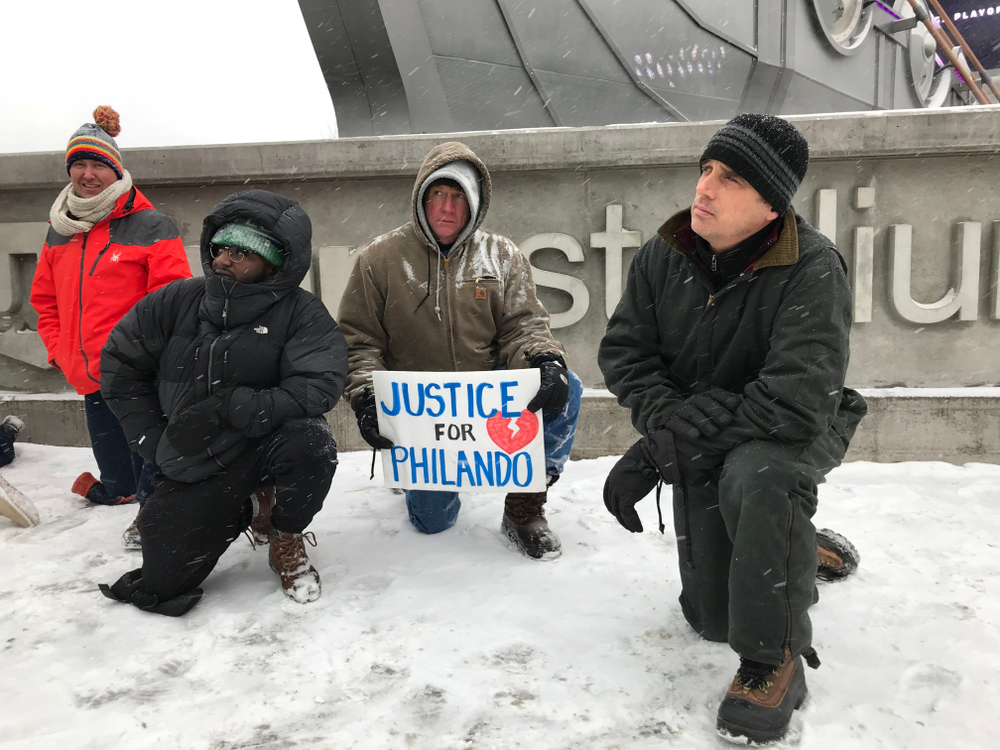 Football player Colin Kaepernick's protest gesture became a symbol of the Black Lives Matter movement. In this January 2018 photo, protesters kneel during the national anthem at a football game in Minneapolis, demanding justice for Philando Castile, a Black man killed by a policeman.
(Shutterstock)
Mukul Kesavan   |   Published 04.08.19, 03:49 AM

The wisest paragraph about the relationship between sport and nationalism was written by E.J. Hobsbawm: “What has made sport so uniquely effective [as] a medium for inculcating national feelings, at all events for males, is the ease with which even the least political or public individuals can identify with the nation as symbolized by young persons excelling at what practically every man wants... to be good at. The imagined community of millions seems more real as a team of eleven named people.”

Indians are familiar with the stories of famous (or notorious) sportsmen who publicly refused to give the Nation its due. Muhammad Ali, who refused to be drafted into the US army and the Vietnam War and was sentenced for it, is the obvious example. But the instance most relevant to us today is the dissent of Tommie Smith and John Carlos, two American sprinters who made the Black Power salute on the medal podium after placing 1st and 3rd in the 200 metres sprint. They raised their fists and bowed their heads and stayed silent as the Star-Spangled Banner played. They were stripped of their medals, expelled from the Olympic Village, and endured death threats for years. Newspapers compared them to Nazis. Smith was discharged from the army.

We also know that after decades of isolation, Smith and Carlos were rehabilitated. Disgrace became reverence and their story became a narrative of redemption. Statues were raised to honour them as heroes of the civil rights movement. Avery Brundage and the Americans who turned on Smith and Carlos appear to us as Neanderthals and bigots, marooned on the wrong side of history.

In 2016, Colin Kaepernick, a black quarterback in the National Football League, stopped standing for the American national anthem. He chose to kneel instead in protest against the violence suffered by African Americans in the US. Donald Trump denounced Kaepernick and NFL franchise owners and NFL fans reacted with concerted disapproval.

One way of bringing these American examples of sporting offences against the Nation closer home is to imagine this happening at home. What if Smith and Carlos’s protest and Kaepernick’s refusal to stand for the national anthem were replicated by Indian protesters during a flag-raising or a performance of the Indian national anthem? To do this thought experiment properly, we should focus on the detail of Carlos’s and Smith’s protest. They wore no shoes to symbolize the poverty in which black Americans lived. Carlos wore a necklace of black beads for African Americans who had been lynched.

What if an Indian woman athlete followed Kaepernick in refusing to stand for the national anthem in protest against the epidemic of sexual violence against women in India? In the context of unfolding mayhem in Unnao and the epidemic of sexual violence in the country, this is not inconceivable. What if a Dalit athlete were to do what Tommie Smith did to protest against manual scavengers dying in septic tanks or to mark the beating to death of Dalit cattle traders or leather workers for alleged cattle thieving? I suspect that the nation state, being a jealous god, would not be happy, and its displeasure might be echoed and amplified by fans, administrators, the guardians of the nation state, even newspaper readers.

Can modern sport, historically joined at the hip with the nation state, evolve away from its conjoined twin? Might the Indian Premier League, patterned on professional sports leagues in America, help cricket evolve from a sport where the highest form of the game is organized around international competition to a football-type situation where fans pledge their main loyalty to IPL teams just as football’s fanatical followers pledge it to clubs like Liverpool and Barcelona? Could the economy of cricket come to centre on the league game, thus reducing international competition to an occasional pleasure and marginalizing nationalism as cricket’s moving spirit?

Some of this has happened already. The IPL is the goose that lays Indian cricket’s golden eggs. It offers wealth beyond the dreams of avarice to a larger pool of Indian players than the national team ever could. More and more players like Chris Gayle and Mohammad Amir have made it clear that they see the lucrative shortest form of the game as their vocation. It’s also clear that cricket’s administrative bodies are trying to reorganize cricket’s calendar to create time slots that can accommodate the Twenty20 Leagues that have proliferated across the cricket world. The Test Championship proposed as a way of providing ‘context’ and ‘meaning’ to Test matches is, in fact, an excuse for reducing the number of Test matches in a year to make room for the format that’s most lucrative.

So might the shortest form of the game free skilled cricketers from national structures and allow them to become travelling mercenaries, and encourage cricket’s fans to switch their loyalties from the nation to the club or franchise?

It’s a plausible idea based on a mistaken comparison. We shouldn’t be comparing the IPL to the English Premier League. The proper analogy is another football code on another continent: America’s NFL. Like the IPL in India, the NFL is a vast country’s highest grossing league. Like the NFL, the bulk of the IPL’s spectators (and therefore its revenues) are local. The NFL, like nearly all American leagues, whether it’s baseball or basketball, is a domestic competition played among local teams staffed with mainly American players. And here’s the thing: the absence of international competition and the absence of national teams make no difference to the superheated, militarist nationalism that virtually defines the game.

The NFL is a good way of thinking about the future of nationalism in Indian cricket because it demonstrates the scope for chauvinism in a domestic league in a democratic country. It’s also a useful illustration of the ways in which corporate media, politicians, celebrity players, fans and franchise owners use nationalism as a magic sauce to grow the game and make it richer.

Militant nationalism came to American sport when the NFL surged in popularity in the 1960s and 1970s. With its helmeted players and its focus on capturing or holding ground, football was the perfect receptacle for a uniformed nationalism in a time of war. To this day, its games feature fly-pasts, the celebration of military veterans and military honour guards.

In the NFL’s Salute to Service games, every player wears a sticker representing the designated military service on his helmet. The NFL would understand M.S. Dhoni’s keenness on a uniformed nationalism completely. NFL players and coaches routinely tour military bases. Pat Tillman of the Arizona Cardinals joined the army and was killed in Afghanistan by friendly fire. The NFL, television networks and the US army colluded to put out a false narrative of gallantry and heroism that the NFL has never recanted.

The NFL’s fan base and ownership are predominantly Republican and overwhelmingly white. Within the game, Kaepernick’s actions provoked massive disapproval. No team picked him afterwards and he had to go to court to extract a settlement. The reason the NFL is relevant to our discussion is that it gives the lie to the glib generalization that franchised leagues inevitably de-nationalize sport. The NFL gives us a sense of how far down the nationalist road sport can travel. Will the IPL make the same journey?

It’s hard to say but India’s 24/7 news channels suggest that there is no downside to patriotism. Hectoring nationalism makes ratings soar; nationalism is a proven force multiplier for modern India’s media. Also, there is no brake mechanism within Indian cricket to stop this from happening. The players seem up for it as their willingness to wear fatigue caps suggest. The team’s charismatic leaders, Kohli and Dhoni, are front and centre in this patriotic rebranding. Cricketing officialdom has shown itself to be enthusiastically patriotic. The Committee of Administrators was even keener than the Indian government to punish Pakistan after Pulwama. Besides, the traffic between cricket and politics over the years has steadily grown. Gautam Gambhir is only the latest cricketer to become a legislator and he, like his predecessors, favours an emphatically patriotic politics. It won’t be a huge surprise to anyone if Dhoni’s retirement features a nationalist political career.

If the IPL and Indian cricket go the NFL way, we’re in for interesting times. Once cricketing arenas become platforms for staging patriotism, the temptation to use those arenas to stage dissent will grow. Sporting nationalism makes Kaepernickian challenges inevitable. We should worry about the consequences of these, living as we do in a Leviathan that eats its ‘anti-national’ young to grow.

It's a cricket field, not a battlefield