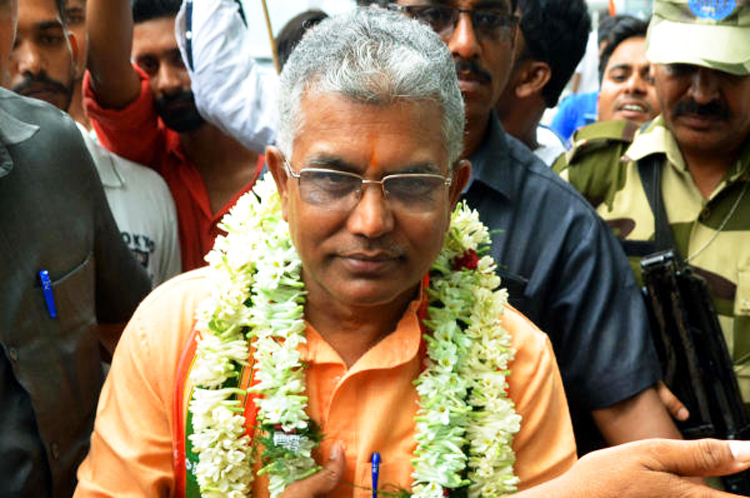 The police have registered a suo motu case against Dilip Ghosh, the West Bengal BJP leader, for his remarks — that may be an additional feather in his hero-martyr cap
(Photo by Sanat Kumar Sinha)
The Editorial Board   |     |   Published 29.08.19, 06:40 PM

Has Gabbar’s time come then? Or does the West Bengal Bharatiya Janata Party chief, Dilip Ghosh, have to wait some more? With all due respect to the leader of a party ruling with an indisputable majority at the Centre, hopeful voters may be wondering if Mr Ghosh, with his promise of Gabbar Singh’s materialization, has anything more up his sleeve than continuous threats to the Opposition and the police. There is no doubt that he represents a force for ‘good’, as he had indicated during the sword-wielding Ram Navami celebrations — a strange phenomenon that the BJP introduced in the state — last April: weapons are traditionally a source of power, whether those of jawans or of Kali. Mr Ghosh has once again come out with a rousing call to his partymen — they should just beat up attacking Trinamul Congress cadre; they should also thrash the police who, Mr Ghosh has repeatedly and publicly claimed, shelter TMC miscreants and register thousands of false cases against BJP workers, landing them in jail.

While Mr Ghosh’s ire no doubt has substantial cause, it may be — however old-fashioned — a little bewildering to find the leader of a party aspiring to take over the governance of a state actually encouraging party workers, not once but repeatedly, to beat up the law-keepers of that state. Earlier, Mr Ghosh had said that the police should be stripped of their uniforms and the day he started killing he would wipe out the whole TMC generation. This time the target of his anger is a police officer in Midnapore, allegedly posted to beat up BJP workers, whom Mr Ghosh might punish in a way that his family would not find his corpse. Mr Ghosh is obviously a pioneer in New India’s style of political leadership. Killing Opposition members is not enough; one must demolish law and order in order to establish the BJP’s dominance. The police have registered a suo motu case against Mr Ghosh for his remarks — that may be an additional feather in his hero-martyr cap. The greatest comic irony is that it is democracy, doddering directionless in the present environment, that allows Mr Ghosh to flex his muscles as he awaits the golden age in which law, reason and civilized existence shall all become fairy tales of the past.