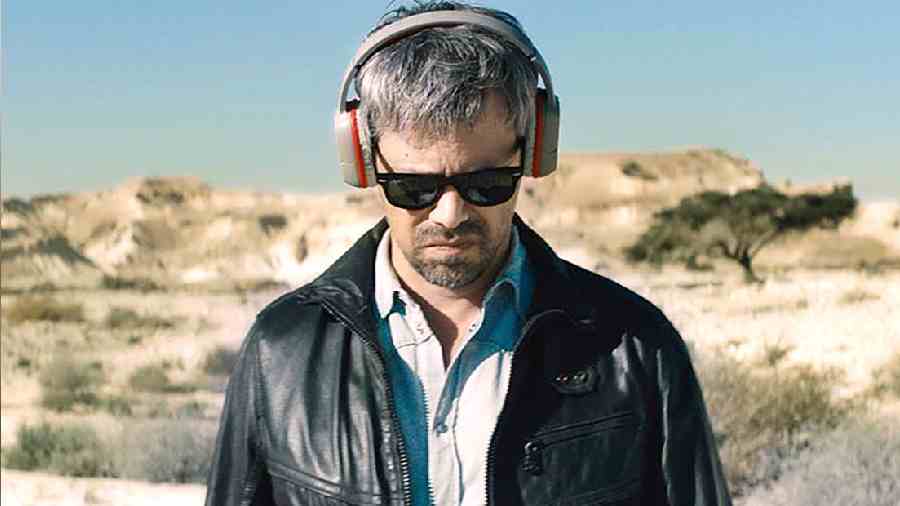 As you start to watch Ahed’s Knee (available on MUBI), you quickly understand why Nadav Lapid is regarded as one of the most exciting new voices in world cinema. Within the first few minutes, you are immersed in a pulsatingly fresh visual language. As the film progresses, you are always on the edge of your seat, even during the slower passages where ‘nothing much happens’; during a moment of silence and contemplation, a punch will suddenly come out of an unexpected corner; during a frenetically violent sequence, the montage will take you down the rabbit hole of a slowed-down hallucinatory zone before ejecting you back into ‘reality on the other side’; music will barge in at moments that seem wrong and inappropriate but then make total sense; silence will cut in when you least expect it to.

In a few sentences, the ‘story’ of  Ahed’s Knee  goes as follows: during the casting process of his next film, a director takes a break for a day to go and present his previous film at a library in a remote, small town far away from Tel Aviv; he spends a day in this small town where he encounters various people, most importantly Yahalom, the woman from the department of libraries under the ministry of culture, who has organised this screening; wandering in the harsh desert landscape that surrounds this settlement of 3,000 people, the director’s mind wanders to other places and spaces; after starting off the screening at the library, the director and the ministry woman go for another walk in the desert where they have a confrontation, which then leads to a climax during and after the question and answer session for the screening.

Described thus, you could be forgiven for imagining that this is one of those quiet films of small unfolding implosions so beloved of art-cinema directors. This would be a mistake. The casting process at the beginning of the story is quickly revealed to be for a film about Ahed, a young Palestininan girl, who slaps an Israeli soldier during an altercation. The girl is put under house arrest but the story explodes when a minister in the Israeli government publicly says he wishes a soldier had shot her in the knee “that would have put her under house arrest for life!” The film the director, Y, wants to make is to be called Ahed’s Knee. However, as we know, it is also the name of the film we are watching.

Yahalom, the woman from the culture ministry, has risen to a high post in Jerusalem but she hails from this small town where she has organised the screening. She is much younger than the director, beautiful, and a great admirer of Y’s work. At first, there seems to be an immediate frisson between her and Y as she shows him around the service apartment where he has been put up for the day. Very quickly though, a niggle develops when she tells him he has to sign an official form before the screening in order to receive the screening fee. Suddenly on guard, the director asks what the form contains. Yahalom tells him it’s just a formality with a list of prescribed subjects that can be discussed after the screening; any artist presenting a work has to tick all the applicable ones from the list of discussion subjects; and if he wishes to talk about any other subjects, he is required to add them to the list. Yahalom says she will bring the list to the screening in the evening.

As the day progresses and the director wanders around the area, a strand of flashbacks starts to weave itself into the narrative. After the screening starts, the director and Yahalom go out for a walk where Y begins to recount a story from his time as a conscript in the Israeli army. This story is told through the most horrifying of the flashbacks, one which rips the cover off the absurdity of the young soldiers’ situation at a border post and the insane brutalisation of conscripts and their commanding officer.

The power of Nadav Lapid’s script accumulates in uneven bursts and, suddenly, the viewer begins to perceive the metaphors woven into the narrative. But along with these undercurrents, Lapid also refuses to shy away from extreme, in-your-face drama. After finishing his story, Y starts to examine the form he’s supposed to sign. Going through it, he starts asking questions of Yahalom. She concedes that she is supposed to police the discussions and stop anybody from discussing subjects deemed ‘inappropriate’ by the ministry. “I’ll rephrase it,” says Y, “suppose I want to discuss a nationalist, racist, sadistic Jewish State, whose soul aim is to reduce the soul, particularly the Arab soul, to impotence and incompetence so it collapses under the State’s oppression and will be completely at its mercy. A State that is a deadly, congenital or contagious disease for its citizens.” Yahalom tells him he’ll be blacklisted. Y continues: “What if the topic is Israelis, in their bestial arrogance, blind puppets, wretched creatures, who torment anybody different from them, and who are obsessed with their possessions... (and) any glimmer of light in them was extinguished by their schools, which commit crimes against their own students, which murder their spirit and exterminate their soul, which spew out impenetrable spite... what if my topic is a State that vomits out whatever doesn’t conform and never takes it back? That brutalises its victims with deepest baseness and sometimes even deeper?” Yahalom reiterates that if he says a fraction of all this, he is finished as an artist in Israel. Ultimately, Yahalom is obliged to say it out loud that she works for “a minister of the Arts who hates Art, in a government that hates all human beauty”.

For Lapid to have made this film in today’s Israel would have taken no little courage. And it’s clear that an artist who recognises the institutionalised cruelty and deliberate failures of his own government so acutely cannot help but recognise the same characteristics if he sees them in other nation states, in other governments, in other ministers in charge of culture who may be on stage with him when he points this out  in a speech. He would recognise them if he saw them in the direct actions of governments but also in the indirect propaganda instruments backed by those governments, in films that twisted history, demonised minorities, and created a vulgar, dumbed-down narrative around a complex conflict. Watching the rage of the director, Y, in a long, bravura closeup take, you can also see the despair and the anger of the man actually making the film. Be they pellets from a paramilitary soldier’s gun that blind schoolchildren, whether it is some Revolutionary Guard’s submachine gun that mows down an unarmed teenager or whether it’s a government minister demanding a young girl be kneecapped by literally saying the Hebrew equivalent of ‘goli maaro s**lo ko’, each manifestation of this cruelty that has spread across the world will reap its own inextinguishable outrage, its own inexorable pushbacks.