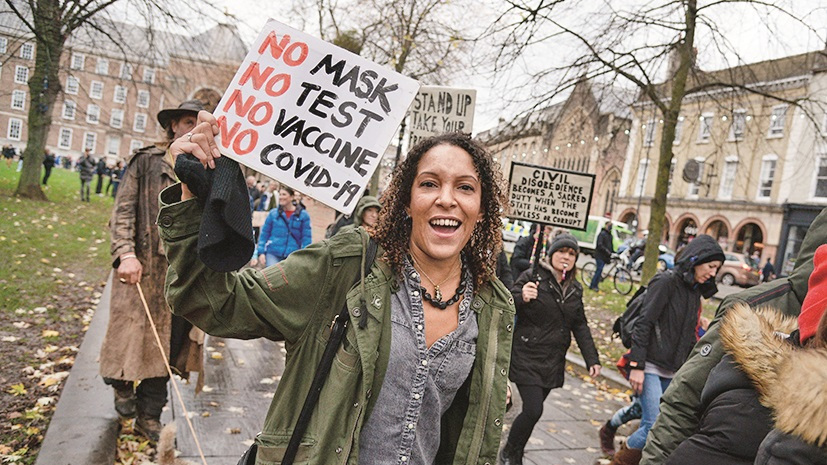 A health official telephoned within hours of my first anti-Covid-19 jab and asked if everything was alright. One reason could have been the controversy over the German and French insistence — which Britain rejects — that the AstraZeneca vaccine should not be given to anyone over 65. It may also have been because black and minority ethnic (Bame) people, comprising 35 per cent of London’s population and 14 per cent of the nation’s, are lagging behind in being vaccinated.

Boris Johnson’s ambitious programme to vaccinate 15 million of the most vulnerable by the middle of this month and millions of others immediately afterwards so that nearly 99 per cent of those who are most at risk of dying from Covid-19 are covered by spring faces huge challenges. Money, the highly competitive international demand for scarce vaccines, rigorous safety checks and deep-freeze storage all present daunting problems. The campaign depends on mass vaccination centres with armies of trained and dedicated vaccinators. It must also counter the whispers and rumours seething below the surface.

The task has fallen on the National Health Service, which was ceaselessly reviled only a few years ago for mismanagement, waste and corruption. Now, it is clear people should be eternally grateful for Clement Attlee’s vision of post-war reconstruction. Vaccination centres all over London, including the Shri Swaminarayan Mandir in Neasden, the ‘biggest Hindu temple outside India’, are managed with smooth and silent efficiency. The health official who telephoned me seemed pleasantly surprised when I told her I was particularly impressed by the courtesy and the competence of the half-a-dozen volunteers — actuaries, accountants and teachers in everyday life — at the Earl’s Court Health and Wellbeing Centre. I was surprised when she asked my reason for taking the injection until I remembered last month’s survey attributing “vaccine hesitancy/resistance” to 31 per cent of Britain’s population and 35 per cent of Ireland’s. While 80 per cent of the overall target has been vaccinated, the Filipino share is only 25 per cent.

An ethnic Bangladeshi professional, born and brought up in Britain, made things clearer by inadvertently reminding me of the Calcutta to which I returned in 1970 after a three-year stint abroad. Street corners bustled with makeshift altars, coins were heaped on trays draped in red cloth, and alms were sought and given from door to door. A radical friend who dismissed all this as superstitious nonsense to placate the malefic Shani — Saturn — overlooked the profound insecurity that underlies all propitiatory ritual. My British-Bangladeshi friend’s sinister tale suggested even more dangerous nervousness. He had heard that hospital wards reserved for coronavirus victims were lying empty. Doctors were being urged, he said, to certify that patients who had succumbed to other diseases had died of Covid-19. “I don’t know if the government gets a subsidy or something from outside for the number of coronavirus deaths,” he murmured darkly.

The data show that black people are four times more likely to die from coronavirus than whites especially in areas like Tottenham with high unemployment and probably more blacks than whites. People of African descent nurse atavistic fears of being exploited for laboratory experiments. But the second wave of coronavirus attacks has hit Asians the hardest, says Kevin Fenton, the Glasgow-born, Jamaican-origin London director at Public Health England. He attributes this to economic deprivation, which doesn’t allow Asians to work from home, and crowded living conditions. The Evening Standard quoted two respected senior doctors, Harmandeep Singh and Gurjinder Sandhu, condemning residents of immigrant-dominated areas for treating the virus as a hoax.

Some are in Southall where shopkeepers are most comfortable in Hindi; some in Ealing where a Liverpudlian friend used to joke he had enough Indian and Pakistani neighbours to get a small Kashmir war going. Many don’t wear masks. Social distancing is ignored. People “walk around as if everything was fine and normal”. Some send subversive messages which sound credible being in an Asian language. Another ploy is to attribute Covid-19 deaths in India to heart attacks.

The pandemic has given us the word, ‘Covidiot’, for a stupid person who ignores precautions. It has also given us ‘Plandemic’. A video titled, Plandemic: The Hidden Agenda Behind Covid-19, promoted the myth that vaccines are “a money-making enterprise that causes medical harm”. Its sequel, Plandemic: Indoctornation (“doctor” being highlighted in the logo to suggest indoctrination) also “taps into people’s uncertainty, anxiety and need for answers”. Shades of 1975, some fear the impact on fertility. Shades of 1857, others believe vaccines contain forbidden animal products despite the announcement by Magda Smith, an NHS director, “I can absolutely assure you there is no animal product, no human product, no eggs, no gelatine, no alcohol” in the vaccines. An anonymous blog in France linking 5G technology to a mysterious coronavirus strain soon went viral on this side of the Channel.

Immigrants may be victims but are not the only culprits. Sir Desmond Swayne, a Tory grandee formerly attached to David Cameron’s government and still a member of parliament, told the Save Our Rights UK group, which has more than 60,000 followers, that the NHS had manipulated statistics to exaggerate the crisis.  Thousands of people marched during the Save Our Rights UK rally at the end of October to protest against the lockdown. According to the group’s founder, the coronavirus regulations “are not proportionate and appropriate, and are causing more harm than good”. They are said to violate human rights, especially the rights to privacy, family life, bodily autonomy and medical freedoms. Across the political divide, Piers Corbyn, brother of the former Labour party leader, Jeremy, designed a leaflet likening vaccination — a confidence trick “just to make money and to control you” — to the Nazi death camp at Auschwitz.

Friction with the European Union aggravates difficulties. Although Britain’s exit was finalized on December 31, the 159-page export rules are not easily interpreted or implemented. Recent weeks have seen dramatic developments like the EU trying to prevent vaccines reaching British Northern Ireland, Belgians raiding AstraZeneca’s production site near Brussels, and Dutch officials seizing ham sandwiches (unauthorized meat exports!) from British truck drivers. No doubt these difficulties will be resolved as Europe settles down to a new political equation but the grim spectre of the mysterious QAnon, with its image of a coiled serpent viciously poised to strike and the caption, “Where we go one we go all”, looms over all controversies.

The story goes back to October 2017 when a series of posts appeared on 4chan, an anonymous English-language imageboard website, with the user signing off as “Q” and claiming to enjoy a level of American security approval called “Q clearance”. Known as “Q drops” or “breadcrumbs”, these messages were often written in cryptic language peppered with slogans, pledges and pro-Donald Trump themes. QAnon rests on the belief that the world is secretly run by a satanic cult of paedophiles and liberal elites and that Covid-19 was planned to shut down the global economy for resetting. According to this version, Trump was the superhero sent to vanquish the cult and usher in utopia. Another variant includes Hillary Clinton’s arrest and execution. Trump reportedly called QAnon activists “people who love our country”. Although he stopped short of endorsing the movement which viewed him as a hero, Trump apparently preened, “They do like me.”

No wonder his parting shot as his plane took off for Florida was to vow to “be back in some form”. Bame and white would be equally affected if that happens for as Britain’s vaccine minister, Nadhim Zahawi, puts it, the pandemic is “a race against death”. Death can come in many forms.